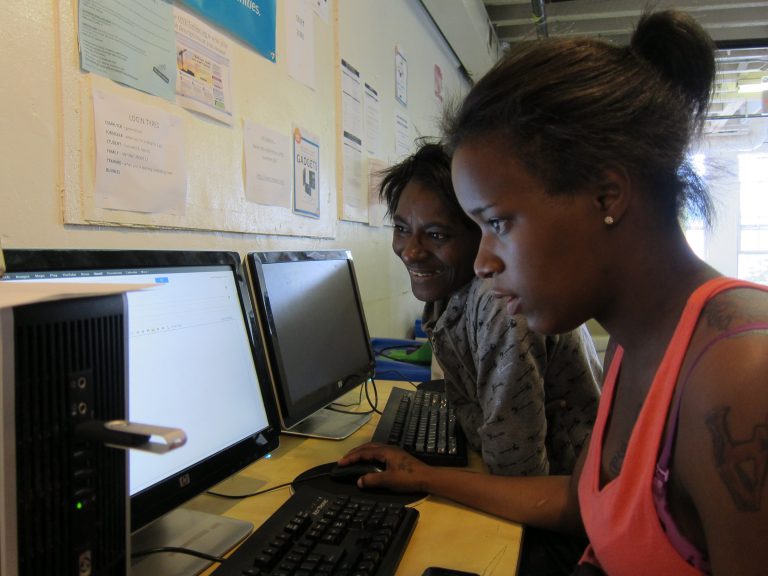 We live in a world today where broadband access is becoming increasingly necessary for attaining jobs, expanding innovation and remaining globally competitive. Even in an iconic city like Philadelphia many residents are struggling to gain basic access to technology. Based on findings from a 2011 poll from the Pew Internet and American Life Project and Knight Foundation, 41 percent of Philadelphia households lack access to the Internet. Some experts have argued that this number could be as high as 55 percent. According to a report released last year by IBM and the city of Philadelphia, it is estimated that by 2030, 600,000 Philadelphians will still be lacking the appropriate technical skills needed in order to meaningfully participate in a networked society. The city has attempted to address these digital access issues in the home through several local initiatives, but Internet use in community spaces can also be a telling measure of broadband adoption as evidenced by the success of the Free Library of Philadelphia Hot Spots program.

Colin Rhinesmith was the lead researcher on the two-year Hot Spots program, which focused on providing access to technology and library services to underserved Philadelphia neighborhoods. Rhinesmith studied what effects this public engagement model had on community member’s everyday experiences with technology. He presented his findings to a group of junior scholars and mentors at the 2012 DML Summer Research Associates Institute in Boston.

During the evaluation process, Rhinesmith discovered that comfort was an essential factor in community broadband adoption. He describes this idea of comfort as one that includes safety, trust, support, and respect. Below are just a few highlights from the interview, but the entire video explores how these findings, which focus on community use of technology in collaborative spaces, can help inform future strategies around federally funded broadband adoption programs.

One of the things that emerged was that a sense of comfort was really, really important…The data really spoke to me by saying no, actually, it’s the gateway to all of it: to access to technology, to gaining skills, to having opportunities, to building a sense of community.

A number of people said that they were hesitant in using the space – there’s hesitancy because there were a lot of places in the community that were here today and gone tomorrow.

People need access to one another. That’s the thing I was really impressed about. These spaces brought together people in a neighborhood. They had seen these people before, but when they are brought together in this space that is supported by the local library, people realized in these focus groups that they had similar interests.

It’s clear that these spaces build community. There’s plenty of evidence to show that. But again, now, how do we continue funding these spaces, and how do we do research in that space to learn more?

As long as the technology changes, there will always be a need for these physical places in a community where people need access to understanding the changes in technology, but also how it impacts their lives.