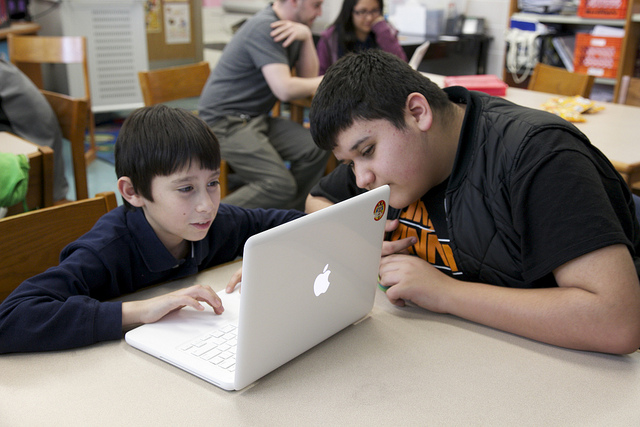 As part of the Digital Youth Network’s (DYN) 2011-2012 professional development, we have set out to explore how critical media literacy can help Chicago middle school students become responsible and savvy digital producers. Through hours of discussion and self-reflection, we have decided that the challenge to integrate critical theory into our tech-heavy digital production curriculum is no easy task. In what ways can we make critical media literacy relevant to our students’ desires to produce media that imitates the same mainstream content we want them to deconstruct?

While teaching a DYN afterschool video production class at a middle school in the Chicago Lawn neighborhood, I found that the act of remixing familiar narratives, images, and characters engages students in the foundational critical media literacy practice of close reading, or in this case close viewing. As part of DYN’s beginner video curriculum, students are required to conduct close viewings of mainstream movies and TV shows. The goal is for students to become familiar with the film basics of lighting, acting, and editing while they learn about genres as cultural categories and crossover narratives from both a fan’s and a critic’s perspective. As the Chicago Lawn middle school students began remixing mainstream content and reflecting on their progress, it became clear that their conceived roles as digital authors required them to imitate and critique the mainstream in both daily blog posts and final video projects.

For their first project, students were asked to identify the genre of a mainstream movie trailer and to closely examine how they can use the trailer’s characters, lighting, and setting to change the genre by remixing screenshots from the trailer to fit the film into a new generic category. Students were given three trailers to choose from: House Party, The Notebook, and The Princess Bride. The most popular choice students made was remixing the romance film, The Notebook, into a horror film. Imposing the horror motif of revenge on the exterior night scene where Ryan Gosling talks to Rachel McAdams while he hangs one-handed from atop a ferries wheel, a student writes:

George comes to the fair and spots the ferries wheel, he also sees a young beautiful woman up riding in the ferries wheel he knows her name and she knows him to. George had try to kill her because he wanted revenge (he wanted to be with her but she did not wanted to). He decides to jump into the ferries wheel and try to attack her but to sad for him he was almost slipping down.

At first glance, the student’s narrative remixing may appear simplistic. However, for this student to pinpoint a specific scene or image that can be associated with a new narrative context demonstrates how close viewings can facilitate a sophisticated understanding of the fluidity inherent in cultural categories, such as genres.

In a similar fashion to the movie trailer assignment, the crossover project required students to find screenshots from two TV shows and/or movies that they were fans of and co 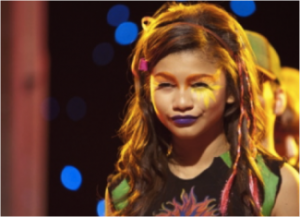 mbine them into one narrative. As students closely examined online screenshots, I gave the prompt to choose images that can be used to match up characters’ eyelines. The goal was for students to create an illusion of consistency between the two texts. In a unique generic mixing of Buffy The Vampire Slayer and Disney’s Shake It Up, a student utilized his close viewing skills to flex the shows’ textual boundaries and re-contextualize the images. The student created narrative tension in his final video through implying that an image of the female Disney character Rocky, wearing an excessive amount of make-up, was actually her vampire form, “Draculara.” The ability for this student to re-imagine the image of this character as a vampire demonstrates his ability to engage in the pleasure that mainstream media provide audiences, and also – perhaps inadvertently – sets up the conditions to challenge and push back on the established conventions of the content. In this sense, the monsterization of Rocky can be viewed as a form of critique.

The ability to conduct close viewings is a skill that both critical theorists and media producers must use as part of their professional practices. The skill is rendered useful in terms of DYN pedagogy as it situates critical media literacy as part of the digital production process. This, in turn, furthers our agenda to conflate digital and critical literacies in Chicago schools. Close viewings both foster a foundation that is compulsory to eventually being able to deconstruct the assumptions that circulate in mainstream media and allow students opportunities to participate in and remix the popular culture of which they are a part.

While not all DYN students will continue to produce media on a weekly basis, the capabilities to engage in popular culture as both critic and producer must be viewed as 21st century life skills. Skills such as close viewing, which promote both critique and production, are necessary to fully participate in the current media landscape.

Until schools begin standardizing media education, programs like DYN must work to prepare youth for a world where the long-standing dichotomies between media producer and consumer have collapsed to impact the workplace, higher education, and domestic life. In this sense, we are not only teaching students how to navigate the ecologies of digital artists and technicians, but also how to participate in the emerging cultures and digital practices of tomorrow.