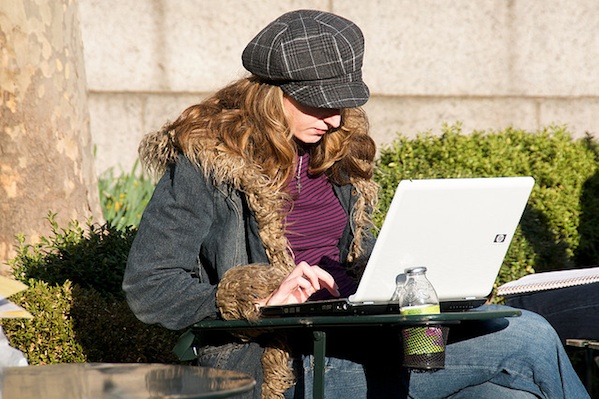 If Rheingold U, my current experiment in cultivating wholly online, multimedia, unaccredited, for-not-much-pay learning communities, originally germinated out of fun and impulse, the next stage was more scary-serious. As soon as I took people’s money and started telling the world about my intentions, I was obligated as well as motivated to make it work – not just to deliver a rich set of learning materials, but to conjure actual social learning magic.

Networked social learning is most effective and truly magical when students who don’t know one another one day start scouring the world for knowledge to bestow on each other the next day and spend their time contributing to each other’s learning. It’s the unpredictable synergy that can happen when a group of strangers assembles online to learn together.

My early encounters with continuous, voluntary, collective knowledge-sharing is what got me excited about online socializing in the 1980s. If social learning can happen on a one-line dial-up BBS in a teenager’s bedroom, it can happen in the era of multi-point streaming video, multimedia blogs and forums, real-time chat backchannels, and collaborative document editing. The communication and information affordances of the media available for free or low cost to anyone with a broadband Internet connection today certainly add sparkle and multiply value.

But the knowledge-sharing gift economy is a human creation – one that can’t be predicted, commanded, or summoned but has to be nurtured, cultivated, and facilitated.

Although I had a couple of decades of experience with online knowledge-sharing, I was terror-struck when I first started putting what I knew about networked mind-melding together with the kind of learning that students pay a lot of money to receive in big old buildings.

I didn’t know who to turn to when I started combining social media with education, but I did know how to find them. Once you’ve found one or two experts in a field, you are on the trail of all the experts you’ll need. Cross-checking networks of educators on Diigo and Twitter led me to the right people and I’ve been learning from and with them ever since. Michael Wesch’s “A Portal to Media Literacy” made clear to me something I had been feeling my way toward — a pedagogy that is more about collaboration than technology, in which the technology is central, but is a vehicle for co-discovery.

The importance of technology in networked social learning comes from the power of digital media to support continuous, peer-to-peer, collaborative, inquiry-based, community learning. There is no substitute for spending hours together in a physical classroom, but the physical classroom has its own limitations. What about the ideas that percolate in students’ minds an hour or a day after the class meeting? What about those students who stay quiet in the physical classroom but can articulate their understanding skillfully in an online forum? You can click on someone’s assertion in a blog in a way you can’t do face to face. And a network helps teachers become facilitators without the innate hierarchy built into physical classrooms.

Cathy Davidson’s bold experiments in peer-to-peer learning, including “crowd-sourcing grading,” gave me a working model to emulate and appropriate. I learned from Mizuko Ito that young people use digital skills and knowledge exchange as social currency in fan cultures – using social media to learn about things that really matter to them, such as multiplayer games, Pokemon, mashups and fan videos. Henry Jenkins taught me about participatory culture and the importance of teaching skills of credibility (what I call “crap detection”) transmedia storytelling, collective intelligence, and network smarts.

Knowing what respected experts think about the new territory I’ve been exploring has been immensely helpful, but of course there is nothing to compare with the thrill and terror of walking into a room full of strangers who expect to learn something from me over the next ten or fifteen weeks, and turning that energy into excitement about the subject matter. I’m interested in exploring, inquiring, interrogating, and arguing about the way we spend our time and attention online, and it only made sense to begin by mobilizing social media skills in parallel with introducing the subject matter. Teaching about social media doesn’t make a lot of sense unless students can use social media in their learning. The skills around the production and communication of digital media are not just tools for succeeding in an always-on digital world. The choice to participate in creating and not just consuming the culture in which we live is crucial, and presenting that choice in terms that can engage students is critical.

The hoped-for synergy of 31 minds who assembled for the first course in Rheingold U  incandesced with a rapidity that surprised and delighted us.

Although it’s true that experiences of rich, deep, fun, peer-to-peer knowledge sharing can’t be guaranteed, I’ve learned through trial and error how to create the right conditions for acts of learning to happen. In a face to face classroom, I know something the students don’t know when they walk in for the first time — that we were able to coalesce into a learning community the previous year, so my own assurance that it can be done again is an important catalyst. My own confidence, based in experience, is necessary and hugely helpful, but not sufficient. The first acts on the first day of class are crucial – what chaos theorists call “sensitive dependence on initial conditions.”

In a face to face classroom, I begin by asking students to move their chairs in a circle – if not directed otherwise, most student cohorts will unconsciously arrange their chairs in rows and columns on the first day if they aren’t already set up that way. And then I ask the students what questions they want to ask in the course – modeling the kind of inquiry I seek from them and at the same time eliciting the behavior I seek for them. Before I tell them about the syllabus as I see it, the students talk about the syllabus as they see it.

Online, there are no chairs, but because of the absence of the customary face to face script – what sociologist Erving Goffman would call the “working consensus” that comes with students, classrooms, and professors – I need to take that much more care of the pre-structuring. I make a model blog post, set up the first discussion topics in the forums, make multimedia minicourses available, and create a slideshow and agenda for our first live session. Even carefully creating the conditions and enthusiastically modeling the behavior I want to elicit isn’t sufficient. As one of my mentors, Lisa Kimball, taught me, a good online facilitator pays heed to the containers, but also thinks in terms of tempo. I knew the importance of engaging as many of the co-learners as possible in the first live session and the first weekend of forum and blog discussion.

I emailed each co-learner individually and emphasized how their particular perspective was important in our discussions. I comment on each one of the 30 students’ initial blog posts. I participate in every forum thread (although I encourage students to unsubscribe to threads if they feel overwhelmed.)

The first weekend, our minds met and we immediately started building our learning together. After an almost dizzying weekend full of thought-provoking posts and comments, I didn’t intervene when the discussion quieted down for a day. We needed to breathe in as a group after breathing out together. I sent an email to the co-learners to that effect. And when it was time to re-activate, I privately encouraged a few people to take the lead. After the first week, we were making full use of both the containers afforded by the online media, and of the tempos that accompany a fully online course with participants located in a dozen time zones.

Not long after we began, one of the co-learners contributed a link to a Washington Post article about “flash seminars.” The Post referred to “an ad hoc performance of pedagogy” that professors and students were self-organizing at the University of Virginia. Were we a flash seminar, asked one of our co-learners? “No,” another once answered, “I think we’re more like a pop-up university.”

I need to see the magic work twice, so I’ve started another five-week cohort of Introduction to Mind Amplifiers.

This is the second in a series on starting a D.I.Y. university from Howard, who is a pioneer in crowd-sourcing and smart mobs.