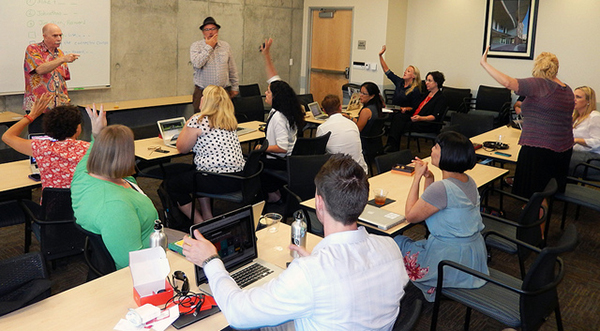 I’ve met and profiled active contributors for years, but Kevin Hodgson has to be one of the most active co-learners I’ve encountered. He was part of my Twitter personal learning network, but I began to understand how much energy he puts into sharing his knowledge and imagination when we participated in Connected Courses, “a collaborative community of faculty in higher education developing networked, open courses that embody the principles of connected learning and the values of the open web.” We had a plan, but part of that plan was what I call “co-learning” — we knew that the learners in this course were also educators, and we knew that they would come up with ideas that the course planners had not thought of. We knew that leaders we had not picked would emerge.

Hodgson, a prolific edublogger and tweeter, started posting “daily connects” — a brief activity, every day, that led the far-flung participants to connect with each other. If you are organizing a course, MOOC, or co-learning community, daily connects are one of the most powerful and yet simple tools at your disposal.

Hodgson is a full-time sixth-grade teacher at William E. Norris Elementary School in Southampton, Massachusetts, and technology liaison with the Western Massachusetts Writing project. He’s as prolific as an educator of educators as he is a teacher. When I say Hodgson is prolific, I mean he has a blog for his sixth grade writing workshop as well as his edublog, another blog about teaching middle school, a National Writing Project blog (you’ll need to join NWP — not a bad idea if you are interested in stimulating student agency as well as skills), and he was an active contributor to CLMOOC, “a collaborative, knowledge-building and sharing experience open to anyone interested in making, playing and learning together about the educational framework known as Connected Learning.” If you want to get started with digital media and learning in middle school, or advance your skills, you could make your own mini-course by just following these links and following Hodgson on Twitter.

Do tune into our video conversation to directly connect with Hodgson’s charisma. I asked him how he got started: “Twenty years ago, I was a journalist.” (For a more recent example of his journalism about education, see this piece on teacher activism.) “I spent five years as an education reporter, so I visited many classes. I’ll never forget one classroom I visited. They had a now-ancient PC in one corner, with fourth graders hovering around it. Their regular science teacher was on a leave of absence, studying butterfly migrations in Costa Rica, sending information back to his students via slow dial-up connection. The kids were so excited. That was a lightbulb moment for me. Although it would take PCs more years to evolve and for network connections to grow faster, I knew at that moment that the right use of this technology would be a game changer.”

I think that tuning into Hodgson’s video and following his links could be a game changer for many other educators.