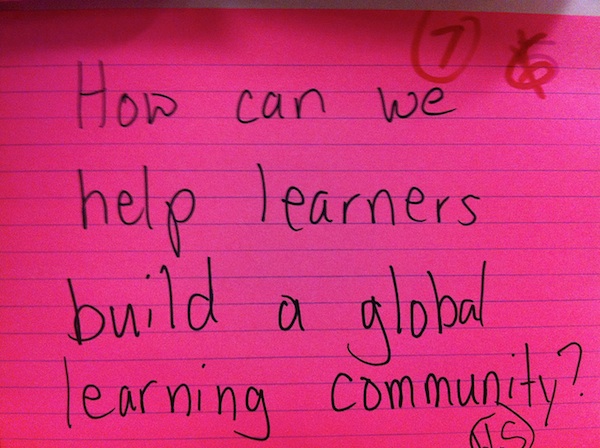 Mark your calendars for Aug. 1! We are looking for proposals that rethink open learning in new ways.

The participation of elite research universities in initiatives offering Massively Open Online Courses (MOOCs) has generated considerable discussion within higher education, as well as mainstream and educational media, about the next generation of open learning initiatives.  The New York Times declared that 2012 was “the year of the MOOC,” and The Chronicle of Higher Education announced that it was “the year of the mega-class.”  Alternatives for the free delivery of course content have proliferated in the years since MIT announced that it would offer free online course materials in 2001 and the launch of iTunes U in 2007.  Open courseware companies such as edX, Coursera, and Udacity provide video coursecasts, interactive quizzes, and peer grading activities. With hundreds of thousands of students from around the world eager to take advantage of seemingly lowered barriers to access, the promises to provide social justice, as well as information and first-rate teachers, through course portals have become more ambitious and perhaps harder to fulfill.

Yet, as these initiatives have proliferated, there seems to be relatively little variety in strategies to recruit and retain students or in the basic design of the educational software interface, and the assumption that bigger is better remains largely untested.  Unfortunately, the promise of educational equity offered by many in the open access courseware movement might differ radically from the lived experience delivered to remote users.  Very high attrition rates characterize the enrollment patterns of courses that prioritize the dimension of massiveness, as Audrey Watters has pointed out, and participant-observers such as Cathy Davidson of HASTAC have noted problems with the talking head format, the lack of reciprocity in peer-to-peer learning activities, and the absence of critical thinking required in multiple-choice quizzes (Davidson, who has now experienced creating MOOC content herself, suggests more learning happens with mash-ups than with MOOCs).  Although MOOCs might be encouraging faculty to reflect more on their own teaching and may provide some interesting multimedia alternatives to textbooks, the designers of these course platforms don’t seem to recognize the revolution in informal learning that has been fundamentally changing pedagogy as peer facilitation takes off.  For those who have been struggling to keep up, Steven Krause has posted a useful list of links here.

Records from online forums hosted by such courses show students expressing their frustration at being starved of the personal attention needed to develop truly participatory learner-centered communities of practice, and there has also been remarkably little empirical research on the student experience in MOOC education.

The Reclaim Open Learning initiative is seeking people interested in postsecondary education to develop a true community of pedagogues and researchers interested in exploring what openness could mean.  Although institutional stakeholders include the MIT Media Lab and the MacArthur Foundation-supported Digital Media and Learning Research Hub, this initiative welcomes those whose work might not necessarily have received the media coverage MOOCs have garnered.  This group recognizes the fact that the open learning movement actually has a very rich history that is less tied to Silicon Valley profit models, a history that includes the work of adventurous pioneers, such as David Wiley, from whom we can learn.  It also encourages teachers to draw on resources from connected learning, such as their webcasts, and archive of videos and other materials.

Please check out the Innovation Contest that offers a $2000 incentive to either teachers or students interested in transforming higher education.  Reclaim Open Learning has already sponsored a hackathon at the MIT Media Lab and is planning an open learning summit at UC Irvine in late September, which should be an exciting public symposium for exchanging ideas.