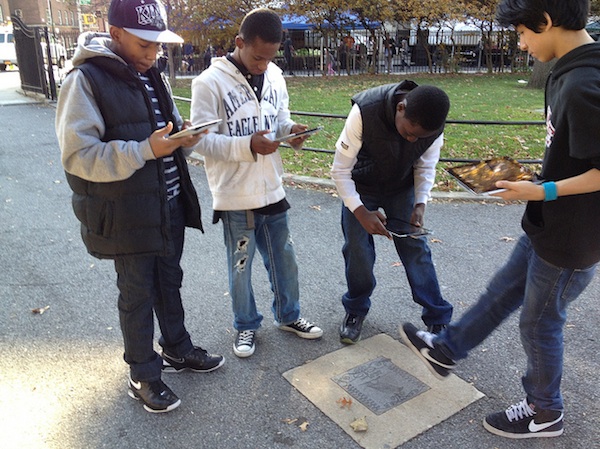 Our Space: Being a Responsible Citizen of the Digital World is nearly 500 pages of workshops and lessons plans dedicated to teaching youth ethics for a digital age.  Produced through a unique collaboration of Harvard’s GoodPlay Project and Project New Media Literacies, it is all free online, as one giant download or as separate files.  We were delighted to see it released, as Global Kids youth leaders played a role advising on various aspects of the project (such as through our Media Masters program, which tested some of the early curriculum).  For those interested in the ideas behind the project, equally exciting is the Appendix, which is a thought provoking debate/discussion about learning in informal educational spaces between Henry Jenkins and Howard Gardner.  As Howard writes, “The background to our group’s participation in the Ethics Handbook is quite different from that of Henry Jenkins and of the New Media Literacies group.”  Or, as Henry writes, “We have not always agreed and, indeed, we’ve sometimes had heated disagreements.”  As a result, their thoughtful exploration of their differences, and how it produced the curriculum, is a fascinating look at two of the key players within MacArthur’s Digital Media and Learning Initiative (disclosure alert: DMLcentral is part of the same MacArthur Foundation initiative) and the intellectual tensions within this broader project.

In Steven Johnson’s Everything Bad is Good For You, he takes the reader on a thought experiment: imagine a world in which video games were invented and popularized before books.  Now imagine, suddenly, books arrive and are all the craze.  Johnson’s intention is to help the reader escape from a book-centric world view and treat games as a medium with its own unique affordances.  But it also serves to highlight the distance growing between, say, a print-based culture and a digitally-mediated culture.  This video takes Johnson one step further; as we watch a 1-year old playing on an iPad with ease, her confusion with a print magazine highlights the growing tension between these two “user-interfaces” and the importance of learning to navigate both worlds.

O to 8: Children’s Media Use in America (report)

In recent years, we have seen a new focus on understanding the hard data on youth’s use of media from the earliest of ages.  Into this space comes this fantastic study from Common Sense Media.  Their goal: “To provide publicly accessible, reliable data about media use among children ages 0 to 8, to help inform the efforts of all of those who are working to improve children’s lives.”  Among the questions they set out to answer:

Some of these are questions we’ve seen answered for older youth; some of the questions are new. In either case, what they found is important.  For example, they document a new “APP GAP”: among lower-income children, 27% have a parent with a smartphone, compared to 57% for higher-income children; 38% of lower-income parents say they don’t even know what an app is, compared to just 3% of higher-income parents.

The next three resources are all videos that highlight the power of games-based learning, but from three different perspectives: that of youth, gamers, and funders.

As programming tools become more accessible, they allow for not only adult novices to learn new ways of expressing themselves, but young students as well.  In fact, Thomas Suarez, a sixth grader, has already had two successful apps under his belt.  In this clip from his TEDx talk, you hear him discuss the importance of having a space for kids to learn how to create games and his methods of collaborating with educators.  Global Kids has always emphasized the power of game design within digital youth media programs (such as our current NYC Haunts project) but it is another thing to hear the argument made directly by a youth.

PBS Arts’ Off Book is a web-based video series that “expands the definition of art.”  In their latest offering on video games, this seven minute video features top game designers and game journalists (among them Eric Zimmerman, who has collaborated with Global Kids in the past).  As they explore the power of games and their impact on society, the visuals highlight relevant gaming examples to provide context.

A Funder’s Perspective: How Games Can Transform Learning (video)

In this short talk (below), Robert J. Torres, Ph.D, a Senior Program Officer at the Bill and Melinda Gates Foundation, explains the power of games in learning environments and how they help us understand and solve complex problems.  He explains how games create highly immersive environments where students experience a heightened sense of relevance.  Torres also highlights the recent use of a collaborative game, Fold It, that actually led to an important scientific discovery.  If games are creating conditions in which youth can participate in such remarkable activities, he says, how can we not take a serious look at games for transforming learning in the 21st Century?

Global Kids does a great job each month flagging important resources; Joliz Cedeno and Juan Rubio contributed to this month’s list. Please share what you’re reading and watching, too! Global Kids’ NYC-based programs address the need for young people to possess leadership skills and an understanding of complex global issues to succeed in the 21st century workplace and participate in the democratic process.