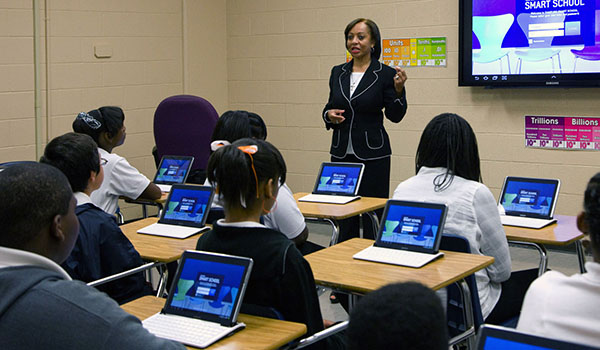 What makes a city “smart?” And, in a “smart city,” what makes a “smart school?” Designers, researchers and commercial technology companies are increasingly concerned with the development of “smarter cities,” “programmable cities”  and “sentient cities” that are augmented with big data, sensor networks, and other computationally programmable processes  and software-supported practices. The smart city is an urban environment with a computational “nervous system.” It appears to have some form of awareness, intelligence, and thoughtfulness, along with some ability to learn and to transform itself.

In many smart city programs, themes such as “smarter education” are emerging as important points of focus for various kinds of imaginings and product developments. It is surprising, then, that educational research has, to date, said very little about such data-intensive, spatially sentient and programmable cities.

This leaves a lot of questions to be addressed. What kind of educational future are we facing in sentient cities that are already becoming automated, plastered in data and augmented with context-aware devices offering mediated sensory experiences; in which billions of objects and machines can interrelate with one another via the Internet of Things; and in which the urban environment itself is able to track, trace and even “think of us?” What does it mean for people to learn in a city that can learn?

A key feature of emerging smart schools, like the sentient cities they belong to, is their dependence on big data. A good example of such thinking is a report from the Chicago Council of Global Affairs focusing on big data in the organization and governance of a future “megacity.” The report offers a vision of a future urban landscape in which the data generated by residents and city operations, twinned with the  ability to collect, analyze, and utilize data for decision making, is increasingly enabled by the prevalence of personal devices, increased connectivity, accessibility to high-performance computing and storage, and advanced analytics. An entire chapter on big data and education in such a data-driven megacity concludes that “harnessing data mining and applied analytics, big data in education can greatly increase the quality of instruction, monitoring, evaluation, and accountability.”

What might such a big data-driven school look like? The authors of Learning with Big Data: The Future of Education suggest big data will ‘reshape learning’ through ‘datafying the learning process’ in three significant ways: through real-time feedback; individualization and personalization of the educational experience; and probabilistic predictions to optimize what students learn. These changes are being brought about, they argue, through a combination of:

The publication provides a seamless image of school as a “data platform,” the “cornerstone of a big-data ecosystem,” in which “educational materials will be algorithmically customized’ and ‘constantly improved.”

The image of the smart school as a data platform in a massive urban big data ecosystem resonates strongly with images of the smart city as a real-time environment that appears more and more sentient and ‘knowing’ as instantaneous processes of data collection, analysis and feedback mechanisms are built-in to its operational infrastructure.

Smart schools are also envisioned as being highly socially networked, with learners participating in a socially connected ecosystem of learning at home, at school and online. Visions such as Microsoft’s Educated Cities program, for example, exemplify a perceived symmetry between networked technical infrastructures with the apparently natural sociality of people. Its Educated Cities white paper emphasizes the social power of mobile devices and social media platforms to enable dialogues and open new “social channels,” as well as the use of “social tools” to foster collaboration.

The student of a Microsoft Educated City is addressed as a social learner participating in new digitally mediated social configurations. It is based on contemporary preoccupations with open education, learning in the cloud, smart mobs, collective intelligence, participatory cultures and so on, and counterposes traditional schooling with the smarter possibilities of open networks, interconnected systems, interactivity and participation facilitated by social media networks.

Smart school visions like this position the social network as a model for reimagining learning. The algorithmic mosaic of calculations and connections constructed by programmers that actually constitutes a social media network is rendered invisible by these claims. Instead, it appears that social media enables people to engage in “natural” social learning activities — as if our natural sociality has demanded the affordances of social media. These conceptions are strengthened by expert claims about the “social brain,” “social learning” and “social networks” that emphasize the social nature of the individual rather than individualist self-interest.

Claims about human social nature are as politically motivated as they are psychologically or neurologically rooted. The idea of the malleable “social brain” of the “social learner” connected to others via “social networks” is not natural and pre-given. It is an expertly constructed accomplishment based on a particular theory of the brain and human behaviour, practised in places like Facebook’s data science team, which presupposes people are naturally imitative and therefore manipulable and susceptible to social influences.

Such assumptions are based partly on populist neuroscientific understandings of the brain’s neural plasticity, mirror neurons and malleability, and on claims that our brains consist of neural networks connected to, and shaped by, social networks and their effects. These qualities of imitancy, malleability and susceptibility to being socially engineered through social networking effects are precisely what Facebook’s controversial “emotional contagion” study explored.

Within the smart school, then, learners are to be addressed and managed as malleable and imitative social learners with social brains, whose behaviours and actions can be nudged, tweaked and influenced by their participation in social networks. The cerebral school is not only a sentient environment, but one where insights from the brain scan have been translated into the school plan.

Another key feature of smart schools will be that they become “sensing environments” in which a wide variety of sensor and actuator devices will constantly capture information about both school facilities and the behaviour and movement of students. Examples include wearable electronics and biosensor devices designed to allow users to track, collect and analyze data on their own activities and health—sometimes called technologies of the “quantified self” or the practice of “wearing the self.”

A market in such devices, like Sqord, are now being targeted for use in health and physical education in schools. As smart schools become sensing environments where data collection devices are worn on the body the functioning of such devices will interlace with school pedagogies and influence how students learn about their own bodies and health.

Through technologies of the quantified self, the student’s body is being redefined as a kind of programmable software that can be de-bugged, upgraded, patched and optimized. Metaphorically speaking, the quantified student is growing an “algorithmic skin,” an artificial informational membrane that continually interacts with, and is activated by, a densely coded informational environment. In the smart school, the body and behaviour of the student can be predicted and modified.

These activities are part of a wider concern with future-thinking in education that is influenced by the technical capacity of computational statistics, machine learning algorithms and predictive analytics to project probabilistic predictions of future actions. Predictive tracking and sensing technologies include learning analytics platforms that can track students’ data over time, link them to behavioral models, and then combine those data to project likely future progress, actions, and outcomes. New kinds of educational data scientists and learning analytics companies like Knewton claim to be able to collect and mine millions of data points on students, with more data on students than Google has on its users.

The quantified student is the product of a massive data-mineable industry and the subject of smart schools where they are to be continually sensed and identified through their “data points” and subjected to continuous processes of data monitoring, predictive modelling, real-time prescriptive intervention, and pre-emptive pedagogic and pastoral practices.

Many smart city programs feature a strong emphasis on the idea of “smart citizens.” The basic logic is that the economic, cultural and political functioning of smart cities will rely on smart people. There is a requirement in such urban environments, then, that people can help contribute to the monitoring and management of the city itself. Recent research from Citizen Sense suggests cities are now becoming more like “datasets to be manipulated,” with citizens as ‘operatives’ with responsibilities for “operationalizing the cybernetic functions of the smart city. …The citizen is a data point, both a generator of data and a responsive node in a system of feedback.”

What kinds of pedagogies contribute to the production of such a smart computational citizen? One way in which smart citizens might be shaped as computational operatives of the smart city is by learning to code. Learning to code acts as a kind of preparation for citizenship in a city where people are required to develop the computational skills required to become operatives, engineers and hackers of the smart city’s services and urban processes. The evidence for such an idea is in how various learning to code programs and clubs have been aligned with emerging “civic technology” and “coding for civic service” initiatives. These initiatives assume that many problems of urban management and control can be solved through the application of technical solutions and computational forms of thinking.

As such, learning to code is part of an emerging style of “political computational thinking” familiar to many smart city visions, which recasts complex social phenomena like politics, public health, and education as neatly defined problems with definite, computable solutions that can be optimized with the right code and algorithms.

Smart schools are in many ways techno-utopian futurist fantasies. But they reflect an emergent socio-technical reality in which data tracking, sensing and analysis, combined with particular behavioral models and theories of the social brain, are increasingly influencing educational administration, curriculum, pedagogy and assessment. Smart schools will mobilize the constant collection and connection of data as a form of artificial sentience, making every aspect of school performance into a real-time process of data collection, analysis and feedback.

Moreover, as educational data science methods and learning analytics become increasingly powerful through the use of machine learning algorithms and predictive modelling, based on “sensing” the activities of students acting as their computational operatives, these sentient and smart schools will become able not only to provide real-time data on student activities, but also to make “future-tense” predictions of their likely outcomes and to prescribe automated interventions that might nudge their individual and social behavior and so pre-empt their futures.