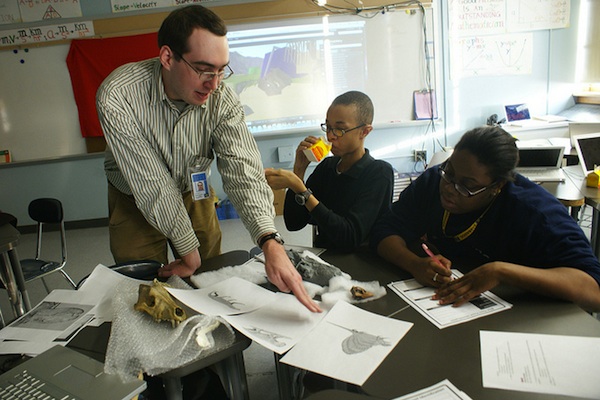 Editor’s note: Global Kids does a great job each month pointing us to excellent new resources.

Digital and Media Literacy: A Plan for Action (report)
This report by media literacy scholar Renee Hobbs for The Aspen Institute and the Knight Foundation is a call to arms. It begins with the declaration that “the time to bring digital and media literacy into the mainstream of American communities is now.” These literacies include the ability to make responsible choices, analyze messages, create content, reflect on one’s own conduct and communication, and take social action “to share knowledge and solve problems in the family, workplace and community, and by participating as a member of a community.” Both this framework for digital literacies, and its action plan for using a community education movement to bring a curriculum into both formal and informal settings, is valuable for anyone concerned about digital media, learning, and issues of equity.

Social Networking and Education (infographic)
This beautifully designed infographic takes data from a recent study to depict how social media is being used in classrooms. “With our culture’s shift to ‘social,’ companies have created tools that offer free platforms for blogs, wikis and private social networking sites…Now, parts of education are moving out of the classroom and onto the Internet…So how are these tools being utilized?” Great to use for teaching others about the benefits of Web 2.0.

Learning: Is there an App for That? (report)
This report from the Cooney Center focuses on “how new forms of digital media are influencing very young children and their families in the United States and how we can deploy smart mobile devices and applications…to help advance their education.” The report discusses new trends in smart mobile devices, the results of three new studies, and the implications these findings have for industry, education, and research. Contrast this with Global Kids’ experience in NYC, whose schools ban students from  bringing mobile phones into schools. This has resulted in youth spending from $1-3 per day storing their devices with local bodegas or specialized businesses, such as the one described in this blog post, “Area Man Cashes In On Youth’s Cell Phone Dependence.”

Canadian television host Allan Gregg welcomes information technology expert Don Tapscott, whose takes on collective knowledge, open-source higher education and technology in the classroom are among the many topics touched on in this interview discussing his new book Macrowikinomics, the follow-up to his 2007’s Wikinomics. Tapscott, a vocal proponent of the “wisdom of the crowd,” argues the unique strengths of online collaborative networks for connecting disparate stakeholders to solve global issues. Tapscott believes the Internet can strengthen civic engagement by creating meaningful opportunities for collective empowerment.

Call of (Civic) Duty: Action Games and Civic Behavior in a Large Sample of Youth (report)
A study (pdf) by Christopher J. Ferguson and Adolfo Garza of Texas A&M International University found that exposure to action-oriented video games correlated positively to online pro-social behavior, but did not predict civic engagement either online or offline. The key factor appeared to be parental involvement, which combined with action-oriented gaming, correlated with higher levels of civic engagement.

5 Hilarious TV Episodes about Tech and Social Media (video)
Social media news blog Mashable compiled five excerpts from TV episodes that reference technology and social media. You’ll see and hear Google, Apple, Facebook, Foursquare, Chatroulette, mobile phones, and other digital media referenced.  All the clips are funny and show how humorists are satirizing the use of digital media (for Hulu clips that are expired, find them on YouTube). Many of these are popular shows that young people watch, and they could be used to engage students in thinking critically about the gadgets and social media they use.

Teens and Technology: The New York Times on Distractions (and Tools) for Learning (blog)

The New York Times published a widely discussed and critiqued article on teens “obsessed with technology” at Woodside High School in Redwood City, California. The latest in “Your Brain on Computers,” a series that examines how a deluge of data can affect the way people think and behave, this article presents a glimpse of how technology is used and viewed by students and teachers at Woodside. Spotlight on Digital Media and Learning blogger Christine Cupaiuolo critiques the Times article, a reason being that it only focuses on one girl in the main story, which fails “to present any gender balance, or to recognize that teenage girls are gamers and media creators, too.” Researchers in The New York Times article suggests that because of the technology and media-rich lives that many young people live, their constant exposure to switching tasks poses a risk for them to sustain a longer attention span. On the other hand, Cupaiuolo suggests that readers also check out Virginia’s Heffernan’s New York Times Magazine column examining attention spans that encourages readers to question whether attention spans are a product of biology or culture. All interesting things to consider while designing for digital media in education.