To start my participation here in DMLcentral, I want to write about social media outside the U.S., specifically in South America. Let’s take the case of Orkut in Brazil, an interesting and relatively-unknown subject that I’ve researched and followed closely for years. Orkut is very much a cultural phenomenon in Brazil. Although Brazilians had experience with other social networking sites (Fotolog, for example, was very popular among young Brazilians in 2003 and 2004, before Orkut appeared), Orkut caused a revolution in Internet access in Brazil.  As Orkut grew quickly in Brazil starting in 2004, it became synonymous with the Internet. Being on the Internet meant being on Orkut. The question of course is, why?

According to data recently released by Ibope/NetRatings (all links in Portuguese), 73% of all Brazilian Internet users are also Orkut users. Orkut is also rated as the third most accessed Internet domain in Brazil. Because of numbers like these, some researchers even argue that Orkut played a fundamental role in popularizing the Internet in Brazil. Many people in Brazil have learned how to use the Internet out of a desire to access Orkut and, among youth, it is commonly said that, “If you are not in Orkut, you don’t exist.”

What is it about Orkut that has attracted so many young Brazilians? How do Brazilians use Orkut? What are the implications of this growth? In my first series of posts, I’ll explore the Orkut phenomena in Brazil, including some of the explanations for, and the implications of, Orkut’s growth. First, Orkut’s appropriations and effects.

The most important practice that emerged from Orkut usage in Brazil was social browsing and, closely connected to this practice, is the usage of the social network site to build identity through performance.  Brazilians use Orkut as a way to show who they are to others. They carefully choose their communities, their pictures, the messages they will publish, in order to display the personal identity they want others to see. Orkut has become a place of personal narratives, where users tell their friends about their personal accomplishments, their families, and their lives. It is a place to keep in touch with friends, but also a place to show others, including strangers, who they are and what they’re about.

Profiles are carefully built in order to show aspects of users’ personalities. 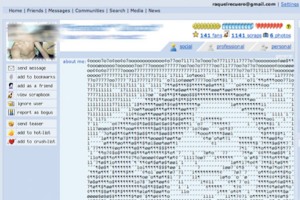 In pictures, users pose with everything that is important to them, using elements that communicate the values of their communities and friends.  However, these elements vary according to the social group the user belongs to.  For example, in the images here, we can see users posing with their guns. The gun is a power display among poor communities in Brazil and its display is made to create an impression of power among friends.  For other groups, this is equivalent to showing a picture of yourself with your new ipod. Different social groups represent themselves with very different value statements.

Language is also a point of differentiation. Users explore slangs, symbols and oralization of the written language as a way to create identity and to build bonds within their groups.  With this example, we can see a profile personalization with ASCII art, showing Bob Marley. 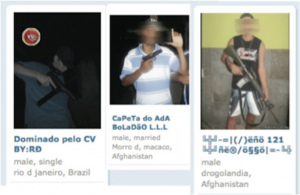 
The growth of Orkut in Brazil has important implications. On one hand, it helped Brazilians to connect with each other, to start using computers and the Internet, to share pictures and to create new social practices. More people started using the Internet – learning its potential – and some even used Orkut to help with their studies. One famous case involved a homeless young man who relied on Orkut (in cyber cafes and in places with public Internet access) to do research and was later selected for a job in a public bank. On the other hand, because people spent so much time on Orkut, many schools, universities and telecentros (public centers maintained by the government with Internet access points) began to block its access.  Criminal usage also emerged, creating fear and turning public opinion against the social network site. For example, the number of criminal and civil legal complaints involving Orkut communities and profiles that focus on racism, Nazism, child pornography and other crimes has increased in the Brazilian courts. Several non-governmental organizations, such as Safernet, have worked to track the complaints and help authorities and users prevent crimes and wrongdoing.

Now, it is becoming common for many users to set their data to “private” (a relatively new Orkut feature). This prevents access to a user’s profile and personal information unless they are directly connected to the user. However, in a somewhat contradictory behavior, people who block access still want to be able to view others’ personal information. The upshot of this user cycle is that a case can be made that Orkut is losing its “social utility.”

To me, Orkut’s potential usage and impact in education and sociability in Brazilian society are not fully understood and are worthy of investigation and discussion. My next posts will focus on Orkut’s role in education and the relevant cultural differences between Orkut and Facebook.