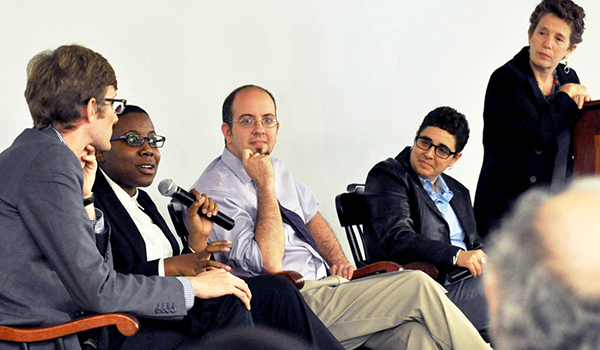 Moya Bailey brings her enthusiasm for transforming the digital humanities and her interest in asking critical questions about basic conditions for digital community engagement to her position at Northeastern University. Bailey has been an integral member of the #transformdh hashtag campaign to promote digital inclusion efforts to prioritize born-digital materials and complicate the potential meanings of “access” to technology.  As a core team member of the newly founded Center for Solutions to Online Violence, which received start-up funding from the recent DML Trust Challenge, she has been seeking innovative approaches to combatting the online sexism and racism that terrorizes so many participants in digital culture and drives them away from asserting greater roles in civic leadership.

In an interview with DML Central, Bailey described how she brings together many aspects of her personal experience, starting with her earliest interactions with computers.  As she explained, “I am technically a millennial, which I despise as a term.  My sixth-grade teacher had a Performa, so I wanted a Performa for Christmas, which was my first introduction to having a computer at home.”  She described how this teacher used “assignments that incorporated digital games and invited students to learn how to use computers in the class.”

Rather than use the label “millennial,” a term that I hate as well, she suggested that “Oregon Trail generation” may be a much more accurate characterization: “I grew up in classrooms where digital learning occurred through games.  In “Oregon Trail,” we would get caught up with shooting the buffalo and then learn you could only carry 400 pounds, which was supposedly a lesson in rationing and managing resources, but we didn’t quite get that message (nor did our predecessors).  We also did journals where we pretended we were on the trails ourselves and had different names and families.  It was a good integration of both digital and analog methods.”

When asked what is succeeding and failing in initiatives to make STEM fields more inclusive, Bailey opined that “one of the things that is working is having young people meet other people of color in their fields. Black Girls Code and other programs bring people together where they can actually imagine these possibilities for themselves.” She also cited the example of Kaya Thomas, who created a smartphone app for finding fiction both with and by people of color. “She coded it herself as a college student.  I would love for coding being part of education for everyone: reading, writing, arithmetic, and coding.  It could be a way of taking away stigma and not making programming so specialized.  If it’s just another language you are learning, it doesn’t have to be inaccessible.”

Bailey also expressed reservations about programs to promote digital literacy that ignored the larger context in which learning happens. To Bailey promoters of computer-centric education “seem often not to take into account the total environment or situation.  It is hard to prioritize coding when there is a lot going in [young people’s] lives. Coding needs to be part of the general curriculum for students who do not have extra time or for whom time is so limited and fragmented.  We need to think about coding as one of the things that saves us all rather than a specialized domain.  From coding, kids learn critical reasoning skills that will help in any field, including tech.  It’s not just about learning a particular tool but learning what is beneficial about that mindset.”

Quirky Black Girls was another formative experience for Bailey.  “I attended Spelman, where I met a lot of strange, weird, different kinds of black girls who didn’t fit standard expectations of them. These were folks not in alignment with the mainstream narrative of who they should be. I created a Ning website, which was a niche social networking platform where you could build for people with certain affinities.  It functioned like Facebook for our community, and people invited their friends and had conversations. When Ning moved to a pay structure, we moved to Facebook, but I liked having that initial platform.  It really helped for people to find each other and know they weren’t alone and develop tools and community that they would not otherwise have had access to.”

Bailey also explained how she became involved with the CSOV.  “Jacque Wernimont and I had been working on a couple of projects before. We had a shared interest in how women and feminists are negotiating online spaces and how to do it more efficaciously and with less harm just by being online.”

Bailey focused on facilitation for the Digital Alchemy group.  In this role, she was able to build on her experiences working with the Crunk Feminist Collective, although in her online writing she has acknowledged the challenges of this kind of work resolving conflicts with many different personalities and the intense labor of being a community manager.

Bailey’s background combining online activism and scholarship also has been applied in her collaborative work with Digital Alchemy.  “I had started working on a book project.  I wanted to make sure that I was communicating and collaborating with the social media cultural leaders, who were people I knew from Twitter and Tumblr.  We were interested in collaborating in a way that feels mutually beneficial.”  She asserted the importance of acknowledging “the different communities that exist online and the different types of violence.  Women of color  have had different campaigns and have mobilized activism and particular hashtags.  They have really worked to create tools and learning guides and educational materials specifically about this question of violence online as it affects women of color.”

Bailey worried that many anti-cyberbullying programs targeted at K-12 students overlook key aspects of online violence. “Sometimes, I think cyberbullying sounds not as intense as what is actually going on. ‘Bullying’ has childish connotations, while ‘violence’ is dangerous and has legal ramifications.” For Bailey, using the right language is part of acknowledging “the harm that they are causing other people” and encourage” a real conversation in schools about what it means to be using technology.  Unfortunately, educators don’t have time, and parents don’t know the tools. But, we all need to make more of an effort to bring that into focus, not just for a privileged few but integrated into childrearing in 2016.”

Bailey also insisted that a new code of research ethics was needed for scholars to engage with research subjects online. “I think that if scholars do more to build their relationships with the people they are working with, I think it might make for less material that is coopted or appropriated. The researcher might get something from it, such as publications, and the community can answer questions that the community wants answered. There’s a history of community-based research in public health and social sciences.” She observed that these joint efforts of researchers and research subjects could be models for other disciplines. “Everybody benefits, and it doesn’t become a situation where researchers profit and communities do not.”

Bailey talked about how her dream university might take award-winning black science fiction writer Octavia Butler as a model for inspiration. “She understands the things that excites the utopian futures that we imagine and sees the limits of our utopian fantasy. For example, in the Parable series, she asks what if we had a hyper sense of empathy. Would that make us more caring and loving? Through her utopian vision, people are people and take advantage of that situation, so there is more exploitation and not less. Butler lets us think through the possibilities and not assume we have all the answers. We can think through and problem solve and understand we are always changing and adapting to our environments.”

“I am really interested in breaking down the barriers between the academy and the world outside. Afrofuturism moves the theory forward.” Bailey pointed to a recent event at Princeton called “Ferguson is the Future” and praised the work of Dr. Ruha Benjamin and Dr. Ayana Jamieson. “It was a coming out event for artists, activists and scholars” who were working together to explore “activism as a form of speculative futurism, activism, as a dreaming of the future that is not the future we have now.  It’s exciting to see the people who collaborated moving in new directions and to keep this conversation between each other moving forward.”