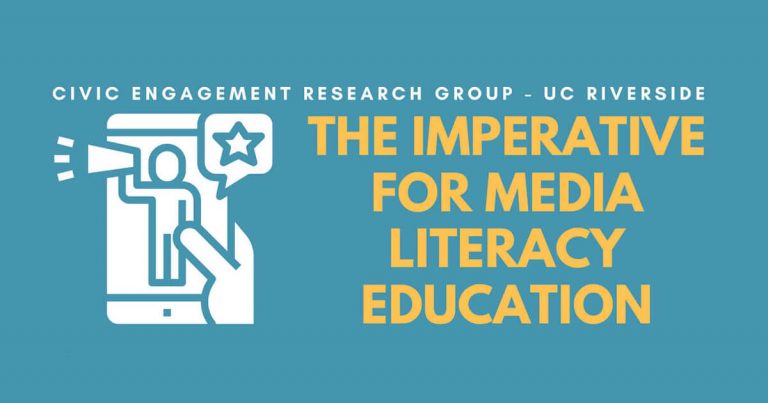 Youth, through efforts that leverage the power of social media, are often driving many of the most important social movements of our era — from the #Dreamers, to #BlackLivesMatter, to the push for gun control and #NeverAgain. These efforts are fueling national dialogs as well as democratic action and are testimony to the power and importance of youth voice. Indeed, young people have been such a big part of online efforts to push for social change that some may conclude that there is no need for educators to help. They would be wrong.

In fact, while some youth are deeply involved in online civic and political activities, most youth participate very rarely, if at all. Our analysis of a publically available nationally representative survey of youth, which we conducted with Cathy Cohen and her team at the University of Chicago, found that 60% of youth had not engaged in a single online civic or political act in the prior 12 months. Since all youth should have a say when it comes to the issues that currently shape their lives and will shape their futures, it’s worth asking whether educators can help.

Good news: they can. In fact, a study I conducted with Ben Bowyer found that the impact was quite large (see: Can Media Literacy Increase Digital Engagement in Politics). We surveyed a nationally representative group of several hundred youth over two years. In addition to asking about the various ways they were involved politically, we also asked how often, both in and out of school, they had digital-engagement learning opportunities where they learned how to effectively create and share media related to societal issues. Youth who were exposed to digital-engagement learning opportunities were far more likely to be politically engaged online – even controlling for prior levels of online political engagement, prior digital-engagement learning opportunities, and relevant demographic variables. Specifically, youth became much more likely to circulate, create, or comment on political content and they became at least three times as likely to participate in a political pressure campaign – one in which they contacted a government agency, nonprofit, or business to express their views.

Similarly, there’s a vanguard of teachers in schools that are working to develop students’ civically oriented media literacies as part of their curriculum. In Oakland, for example, teachers Jason Muniz, Johanna Paraiso, and Nina Portugal have been working over the past several years with my colleague Erica Hodgin to develop students’ capacities to blog for social change. These efforts often start in modest ways, with students reading and then commenting on other students’ blogs – using either Edublogs or Youth Voices. Over time, students do their own research and blog about the civic issues they care most about (see video of these teachers and their students here.)

Though these results indicate that efforts to teach digital engagement literacies can be impactful, it is also important to highlight some reason for concern. Sixty-four percent of the youth we surveyed said they did not have any opportunities in school to learn how to effectively share digital content tied to a social or political issue. In short, when it comes to providing impactful educational opportunities, there is plenty of room for improvement. And by expanding opportunities in both community organizations and schools we will have a much better chance to equitably and effectively serve all youth.

A second concern is also worth raising. Some have worried about promoting online engagement since youth (like adults!) sometimes participate online in problematic ways. To us, this signals the importance of helping students learn to use their voice powerfully, thoughtfully, responsibly, and effectively. And learning to employ these educational approaches effectively will take some work. Fortunately, toolkits and related resources are increasingly available (see for example, the 22×20 Toolkit, the Digital Civics Toolkit, Civic IDEA, and KQED Education).

So, despite the challenges and complexities, it is critical that all youth have access to high quality forms of civic media literacy education. By developing learning experiences where youth create, circulate, and reflect on civic media, educators can help youth leverage the power of digital media as they work to create a better world.