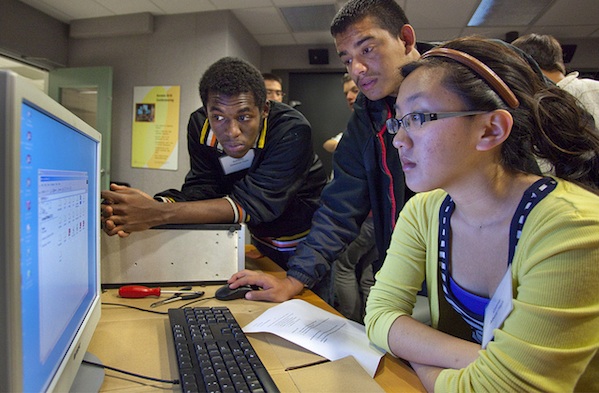 Like many, I spent part of my summer catching up on books I’ve been meaning to read and haven’t committed the time to do so during the rest of the year. Along with fun genre fiction, one book I finally picked up was Walter Isaacson’s biography of the late Steve Jobs. I should note that I am typing this post on a MacBook Pro, that I regularly rely on an iPad Mini for writing while traveling, and that much of my leisure “reading” today comes from playing audiobooks (at double speed no less!) on my iPhone. The legacy of Steve Jobs’s design and development vision clearly impact how I do work everyday. That being said, throughout the book I was most struck by three facets of Jobs’s life that educators should consider as the new academic year begins: privilege, petulance, and passion.

Perhaps more than any other factor, the way white privilege directly led to Jobs’s early success was striking to me. As a teacher who worked only with black and latino youth when I worked in south central Los Angeles, I felt like many of the decisions that Jobs and his parents made simply would not be possible for my former students.

In middle school, Jobs was sent to a school that was plagued with violence. As Isaacson writes:

Jobs was often bullied and in the middle of seventh grade he gave his parents an ultimatum. ‘I Insisted they put me in a different school,’ he recalled. Financially this was a tough demand.

Even though it was a burden for his parents, Jobs is able to move beyond the class-based challenges of school violence, bullying, and social struggle that continue to plague inner-city schools.

Similarly, Jobs wasn’t challenged in school and found ways to continue sharpening his mental acuity: “I was kind of bored for the first few years, so I occupied myself by getting into trouble.” The kinds of pranks Jobs pulled off weren’t always harmless either. For example reflecting on antics dating back to third grade he said, “One time we set off an explosive under the chair of our teacher, Mrs. Thurman. We gave her a nervous twitch.”

Taken as part of a legacy for one of the most successful tech innovators, these pranks are read as endearing and playful. The reader should like Steve Jobs even more knowing he was somewhat of a rapscallion as a child. However, I struggle thinking about what happens to trouble-making boys today. In particular, young men of color who might have similar dispositions for mischief would not be afforded the same kinds of opportunities; they would likely follow a statistically significant pathway of youthful trouble to incarceration that is found in today’s school to prison pipeline.

Helping to keep Steve Jobs on the right track he had vocal parents who advocated for him and bent to his will. Responding to teachers about Steve’s behavior, Isaacson noted that his parents told teachers, “If you can’t keep him interested, it’s your fault.”

And even as they encouraged Steve Jobs to pursue learning in his own pathway they also were unable to curb all of his behaviors. When Jobs’s father found marijuana in Steve’s car he was furious:

“He wanted me to promise that I’d never use pot again, but I wouldn’t promise.” In fact by his senior year he was also dabbling in LSD and hash as well as exploring the mind-bending effects of sleep deprivation.

To be clear I am not condemning his drug use. Instead I believe it is important to highlight the ways white privilege was pivotal in shaping Steve Jobs’s formative adolescent years. As I read the book I could not easily imagine that the same chances afforded to Jobs would be available for many of my students of color today. Being enrolled in low performing schools, flirting with drugs, and getting in trouble are the stereotypes of youth of color. And yet, for Steve Jobs they act as tribulations which he was able to overcome.

I’ve talked with a lot of my former students over the years and I am struck by the ways these students persevered in adversarial-downright horrid-school conditions. The schooling my students experienced – from expired lunch meals to year-long library closures to constant teacher and administrative turnover – was not fair or equitable. Steve Jobs was able to navigate beyond these challenges and developed a powerful skill along the way: petulance.

Whether it was the design of the latest computer or a move to become CEO of Apple, Jobs was really good at being a brat (at least according to myriad interviews within Isaacson’s book). A product is not shaping up as Jobs hoped? The solution is simple: call the product “shit,” the designers “bozos,” and throw a fit until people see it his way. Time and time again this was part of how Steve Jobs created successful products.

While I would not directly ascribe this trait to Jobs’s white privilege, I do think that the way he was able to wield his privilege in empowering ways as a young man led to his feeling confident in his ability to throw fits as a power play. However, I would also add the caveat that Jobs didn’t throw fits whimsically. At the heart of these whining tirades? Passion.

Privilege and petulance aside, Steve Jobs wouldn’t be someone we would be reading about (or watching Ashton Kutcher impersonate) if it were not for his passion. Isaacson’s book makes it clear that Jobs really cared about the products Apple put out, the films of Pixar, and improving the standards of everyday design. Passion isn’t teachable and it is a testament to Jobs’s roaming behavior that he was able to develop and create spaces to fuel his passion rather than be plugged into settings that killed it.

So what does any of this have to do with today’s students? In particular I think it is important for us to ensure we keep in mind how white privilege can enable and hinder success and innovation for young people.

Several years ago I watched a good friend, Travis, work with ninth graders and unpack lessons from Elie Wiesel’s Holocaust memoir, Night. I asked Travis to recollect what happened in a discussion about setting the context of the Holocaust. He writes:

I said, “Imagine that people of color got together and decided that white people of European descent have had control of this land for five hundred years and have not done much to preserve its resources or benefit most of its people. Therefore, as of tomorrow, all white people and people of white descent will be rounded up for deportation. Their property will be redistributed amongst people of color.”

I offer Travis’s anecdote to remind us of how white privilege seeps into the consciousness of all youth. I finished reading Isaacson’s biography of Steve Jobs with an appreciation of his innovation and vision. Jobs made a lasting contribution on my personal livelihood, as I mentioned above. And yet, I don’t think that the same chances to innovate for what one loves will be available for the urban youth of today anytime soon.