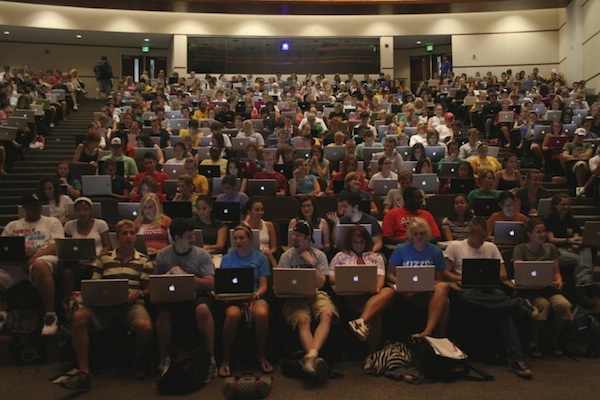 Here’s the punchline: The humanities in the U.S. are in crisis for the same reason that STEM is in crisis – not because of STEM (Science, Technology, Engineering, Mathematics).  And vice versa.  The crisis comes from declining or at least stagnant numbers of students in these areas.  Faculty members are panicking and making snide, demeaning, and sometimes insulting comments about one another instead of coming to terms with the basic issue of why students today aren’t flocking to these subject areas.  To my mind, therein lies one of academe’s biggest problems.  We’re better at defensively placing the blame elsewhere than at constructively looking at how to change ourselves.

Let’s start with jobs.  Jobs are thrown around in just about every conversation about higher education today.  But, when you listen to the different arguments in the humanities and in STEM, you have to conclude that the jobs rationale for declining interest is chimerical at best.  Academics in humanities fields often insinuate that students are going into STEM fields because that’s where jobs are.  Defensively, humanists insist that the real and important mission of higher education should be enlightening and informing the whole person, infusing them with historical knowledge and critical thinking skills, with imagination and depth and vision.  Higher education, humanists insist, should not be reduced to mere “job training.”   Meanwhile, STEM faculty can’t use the lack of jobs as an excuse; in fact, they tell us over and over that there is a shortage of qualified STEM graduates for all the tens or even hundreds of thousands of jobs available in STEM fields.  So clearly jobs aren’t the issue for STEM academics.  They too often say that STEM is “difficult,” and students are rushing into “soft” and “easy” fields in the humanities and social sciences instead.

What a mess of rationalization and fingerpointing.  If jobs were the issue, we’d have no one in the humanities and everyone in STEM fields.  And if taking “easy” courses were all students cared about, everyone would be rushing into a major where they could be reading and writing critical essays about lightweights like Kant, Derrida, and Mbembe.

In a digital world where technology and technological change and the personal, social, and political changes wrought by technology are ubiquitous, shouldn’t STEM be an easy sell?  In such a tumultuous world, where we need every shred of history, ethics, philosophy, critical thinking, creative expression, and imaginative articulation to help us, shouldn’t there be deep yearnings of the human soul that only the humanities address?  One would think so.

In an era where everyone is spending more time looking at and producing texts, images, and sounds online, in an Information Age, certainly the English Department (my home discipline) and the Computer Science and Engineer schools should be exploding with activity and enthusiasm.  Not.

So maybe the problem isn’t external but internal.  Having spent a day randomly scanning the webpages of humanities and STEM programs at about twenty universities, I must admit that much of what I’m seeing resembles all too closely the curriculum when I was an undergraduate, in those distant days before the Internet.  Even worse, a lot of the distribution requirements I’m seeing in STEM and even more so in humanities departments seem like Rube Goldberg inventions wackily engineered to make sure as many students as possible hit as many of the courses taught by current faculty in as many scattered disciplines as possible.

Only at a few institutions am I seeing carefully conceived thinking not just through and among scattered general education requirements but with exciting pathways from those foundational courses into and helping to shape an understanding of that more specialized work.  It’s almost as if the liberal arts are a matter for lip service, not foundational to the mission of the whole undergraduate learning experience, inside the classroom and out.

Legacies die hard.  Especially when they are our legacies.  It hurts to give them up and, sometimes, we cannot even see a way from what we know to what our students urgently need to know.

To that end, starting in January 2014, HASTAC is launching one gigantic, open, and open-ended worldwide thought experiment:  we’re going to try to galvanize excitement about thinking together, students and faculty, about “The History and Future of Higher Education.  There will be open and public-facing onsite and online courses, webinars, workshops, demonstrations, tools, and resources, including some built on wikis so that everyone might contribute ideas.  The sky’s the limit and everyone with constructive, imaginative ideas is invited.  So far, some fifty teachers and professors have joined in, from all kinds of institutions (community colleges and elite private universities, massive public universities and liberal arts colleges).  You can click on the “Suggest an Addition” button and fill out a brief form and have your own course listed and get yourself on a list serv.  We’re building tools to host ideas for pedagogical and institutional innovations as well as a community-built resource page.  I’ve also created an evolving public Google Doc where anyone can add comments.

Here’s one project I’m going to host in my own class and I hope others might join in.  Students in my class on “The History and Future of Higher Education” will work in project teams to create three or four very different fictive universities, from scratch.  What would it look like if there were no legacies from medieval traditions, Enlightenment epistemologies, or Industrial Age requirements, regulations, departments, majors, minors, distribution requirements, professional schools, or standardized assessment metrics?  Who would our students be?  What prerequisites would they have?  What would we want them to learn?  How much would they pay?  Who would pay—and how?  How would we ensure diversity?  Where would the school be located?  Would it be in a building, online, take a whole city as its campus, or maybe the whole world?  How would knowledge be organized?  How would we know when/how it was mastered?  What would constitute “graduation” from our institution?  Who would judge?  By what standards?

Those are the kinds of big questions most institutions do not ask of themselves.  And students will lead the way.  It can only be useful and certainly interesting to be imagining answers without boundaries, if only to test the limits of what we think to be boundless.  Talk about a challenge!

We’ll be putting up our fictive universities on open public websites throughout the winter and spring of 2014.  Anyone who wishes will be invited to modify, amplify, or post their own model universities.  I’ll also be “teaching” a Coursera MOOC on the same topic starting Jan. 27, and I’ve been told to anticipate tens of thousands of students worldwide.  My face-to-face class will be meeting at the same time as and coordinated with courses taught by David Palumbo-Liu at Stanford and Christopher Newfield at UC Santa Barbara.  My students will post their model universities on the Coursera Forums.  They will invite that huge international community to dream away too, and we hope it will generate one enormous conversation that will help all of us think through new paradigms for higher education.

Maybe the exercise of having thousands of people engaged in the endeavor of unfettered imagining will help us get past the banal fingerpointing, and also help us past the Massive Online Open Course format which too much replicates massively the same structures we’re stuck in now.  If we can come up with some truly exciting and innovative ideas, maybe we can stop blaming one another for the crisis.  Maybe, together, we could even come up with some ideas to end it.  Until we do, we’ll keep rearranging the deck chairs on the educational Titanic – not thinking of far better, smarter, safer ways to traverse the globe.

Will a massive thought experiment really transform higher education?  Maybe.  Maybe not.  We may not change a single thing but our own minds.  If there are enough of us willing to take that chance, that’s already a victory.