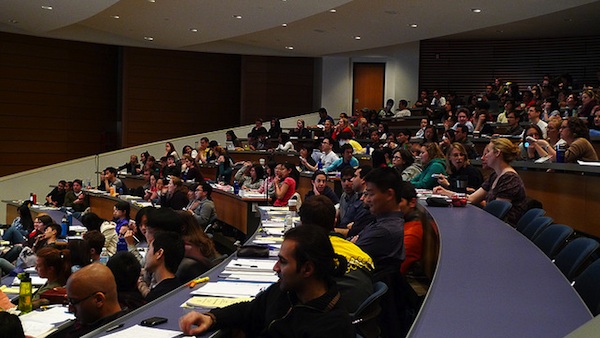 When I think about the “ethics and responsibilities of the 21st century classroom,” I think not only about our ethical responsibilities toward students but about our ethical responsibilities toward teachers.  I am very concerned that the drop-out rate of K-12 teachers is even higher than the drop-out rate of K-12 students in the U.S. and in many other countries around the world.  As I’ve gone around the U.S. and abroad talking with teachers, I’ve seen over and over how beleaguered they are: by (a) too many rules, (b) too many constantly-changing systems and theories, by (c) too many “learning objectives,” by (d) too much pressure to deliver “content,” by (e) too many expectations about high test scores (on standardized tests that often do not measure real learning and content), by (f) ever-escalating and rigid standards of “accountability,” and, added to all of this, by (g) too much faddish, expensive new technology dumped not only on kids but on teachers as if the technology itself magically will take care of a, b, c, d, e, and f.

That won’t happen.  Technology requires serious, thoughtful reflection about how it can promote real learning.  And that, to me, is the first ethical responsibility we need to address: Rarely are teachers given the time, the training, the support, or even the opportunity for peer-support and peer-collaborations that allow them to conceive of the best way to use those shiny new iPads or the latest software that promises “results.”

To paraphrase Steve Jobs, “technology alone is not enough” in our schools today.  We need a massive paradigm shift if we are going to save our schools, our kids, and our teachers.  My own verdict is that we are at an incredible moment of opportunity, a transitional time, but that right now, in 2012, we are courting an Epic Fail.  We are expecting too much of the wrong thing.  We are judging classroom success by antiquated, arbitrary, and confusing standards that, in themselves, fail our kids and their teachers—even in those schools around the world where kids’ test scores are superb.  The test scores (whether high or low) are part of the epic fail because the tests themselves too often replace real learning as the point and purpose of education.  If we are going to talk about ethics and responsibilities in the 21st century classroom, we can’t just “add on” new digital tools but we have to rethink the basics of connected, interactive, participatory learning.

Most recently, I talked about all of these things in Bangkok, Thailand, where I was honored and delighted to deliver the keynote address drawn from my book Now You See It, at the March 28-31 teacher’s meeting of EARCOS (#earcos12), the East Asia Regional Council of Schools.  EARCOS is an organization of 130 primary and secondary schools that mainly use English as the language of instruction.  These include AP and IB schools and a number of other private schools.  My argument to the 1500+ teachers at the meeting was that we currently are in an avalanche of conflicting, even overwhelming institutional requirements for students and teachers because we are caught between centuries.  We are using nineteenth-century institutions to grill and prep and test youth on twentieth-century content — and we are missing the key interactive, connected, and participatory requirements of the 21st century world that we all actually live in.

In addition to the keynote address, I also gave three workshops at EARCOS.  The first was on “How We Measure,” and looked at new forms of assessment, and particularly the Finnish idea that we should be aiming for the best way for every student to attain an equal, high standard of knowledge.  This flies in the face of the way most of the rest of the world judges educational success, by a relative, competitive, and extrinsic metric determined by how they do on standardized tests.  And of course the punchline is that, when the OECD asked Finland (which all but abolished standardized testing in the 1980s), to take the same tests everyone else takes, the students, who had never seen such tests before, came out on top, as detailed in Pasi Sahlberg’s Finnish Lessons.

The second workshop was on “Peer-Learning and the Peer-Generated Syllabus,” where I talked about my “This Is Your Brain on the Internet” course at Duke where students lead the classes, generate the syllabus and assignments, and learn how to give one another feedback towards individual and collective mastery of the course content.  Workshop participants wrote out their own successful experiments in peer-learning on notecards and included their email address.  They then turned to someone they didn’t know, explained their experiments to one another, and exchanged cards.  Everyone left with at least one contact person to connect with if they ever felt despair that their learning experiments were under-appreciated by local administrators or parents, itself a lesson in connected learning.

Each of these workshops was vital and engaging.  I learned far more than I taught — as always happens in a successful workshop.  And the keynote and these workshops were all designed to lead to a third collaborative workshop framed as an “Innovation Challenge.”  In this workshop, we worked together on a public Google Doc.  Some members of the workshop were familiar with this tool and others were using it for the first time so we worked in peer teams where everyone could learn from someone else.  I wrote a Preamble on the topic of “The Ethics and Responsibilities of the 21st Century Classroom,” with the challenge being that, at the end of our ninety minutes together, we would emerge with a collectively produced document, a guide offered by us to other teachers and administrators concerned with the best and most responsible ways to introduce digital media into the classroom.

The bulk of the workshop happened in small groups, with people writing together around shared laptops, with some breakout time for discussion by the whole group, and then more huddling and writing at the laptops.  Over the next twenty-four hours, individuals also went in and added more bullet points and edited the document.  I offered to go back in and do a final “clean up,” editing for syntax, parallelism and so forth.

The final document is intended as a helpful guide to others, and encouragement to teachers and administrators to step back, take a deep breath, and instead of piling on more requirements, really rethink what we need in our 21st century classrooms.

Our grandest hope is that our collective document, collaboratively produced in a very short time at one workshop at one conference in Bangkok, might serve as a catalyst for others, at schools in communities worldwide.  Together, we hope we can begin to think about what is needed, now, to make real, ethical, responsible institutional change.

The next blog post will be our document, “The Ethics and Responsibilities of the 21st Century Classroom: A Collaborative Guide to the Best Digital Learning Practices for K-12 Teachers and Administrators.” Here’s a link to the public Google Doc that, at the moment, is open to anyone.  We invite you to add your own concerns to the preliminary list we generated.  Remember: this document is a collaboration, the result of one very brief, public conversation among teachers who began as strangers but ended as colleagues, connected and learning together.  We hope you will join us.