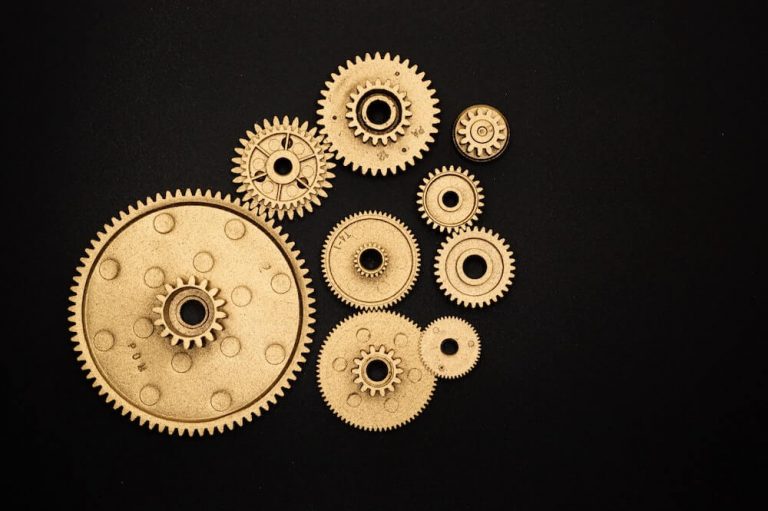 For anyone interested in how to better connect with teens, here’s an idea: stop starting conversations with how “terrible” social media is, and instead ask teens about their grinds. Last summer, I worked with Project Zero researchers and other teens to design “The Grind” – a way of thinking and talking about the different pressures we as teens feel, and how social media can accelerate them. It’s both a reflection tool and a way to spark better, deeper conversations.

Social media usage can speed up grinds at an especially high rate. Every teen I’ve talked to has grinds, and their grinds are the direct result of their individual experiences. The image below shows a mindfulness activity that our team created: the empty cogs are intended to be filled in with whatever grinds a person is currently facing and feeling. 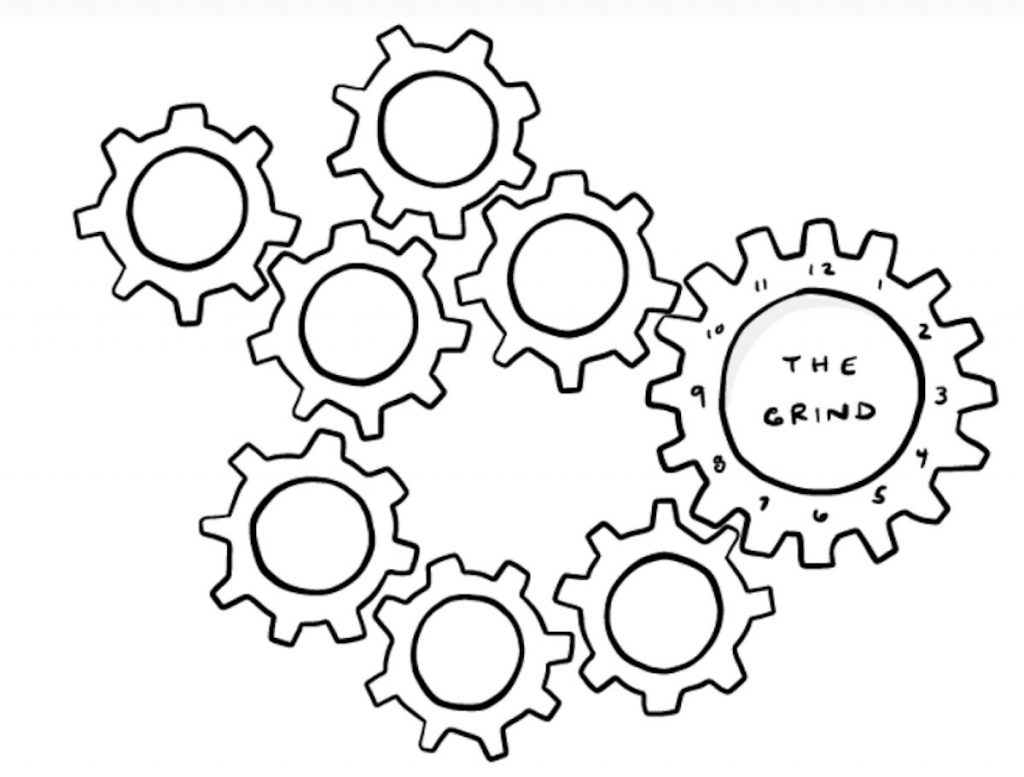 In the year since we designed the grind activity, we’ve had the chance to collect and test out the grind with different groups. Below is an example of one teen’s grinds: 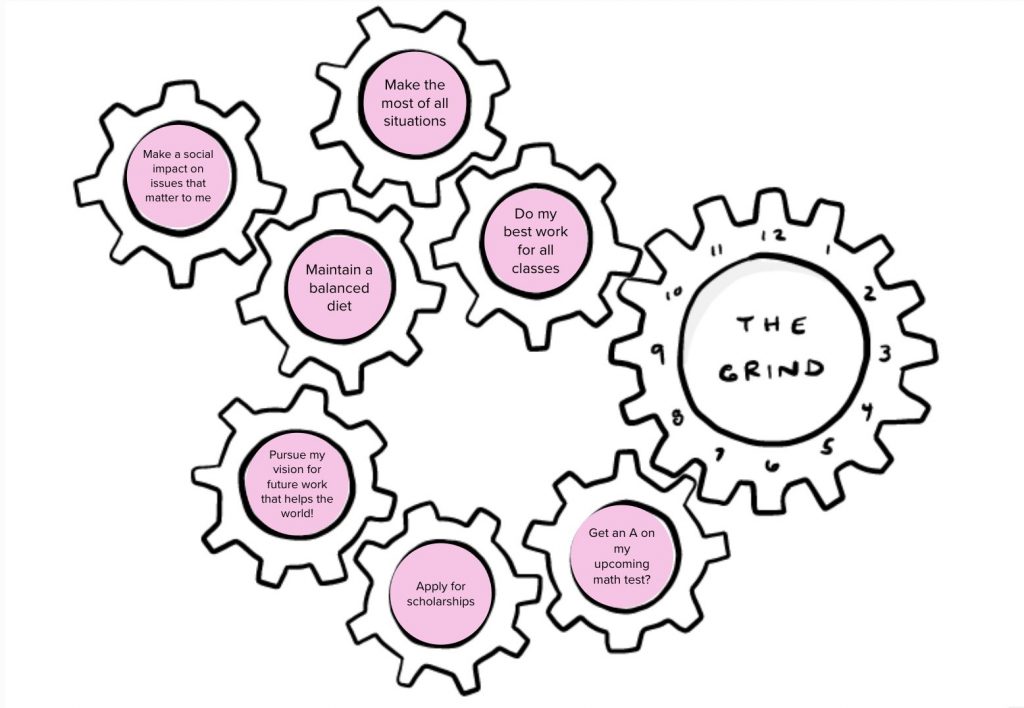 Many examples like these – cogs filled out by teens from all different backgrounds – helped the team identify a number of recurring grinds. They play out differently for different teens, but core grinds include:

As a rising high-school senior, my life is buzzing with different grinds. A boom in socializing during the summer, preparing my college applications, and the looming threat of Calculus next year are all creating pressures to maximize my time and spread myself as thin as possible.

Many grinds I’ve experienced are accelerated by my social media use. For instance, as a queer person, social media’s lopsided representation of the LGBTQ+ community accelerated my “Appearance Grind” and my “Persona Grind.”

During the summer before Junior year, I devoured queer romance films such as Love, Simon and Call Me By Your Name. I’d only recently declared my queer identity publicly and was interested in delving into queer media. Within these films, I found solace. The characters openly expressed to the audience their struggles in accepting and expressing their identities. They were vulnerable, and their exploration of their identities was anything but seamless. Although the storylines were dramatized for theatrical purposes, I found that these films accurately portrayed the struggles and hesitation I faced when learning to accept my queerness.

I did not experience any accuracy in the portrayals I saw on social media. Around the same time, whether or not by coincidence, my TikTok ‘For You’ page began to sprout videos that discussed, praised, and criticized these films. I engaged with these videos by liking, commenting, and sharing them with my friends. Then, videos by queer influencers started to infiltrate the content I was seeing. However, these videos were not 2+ hour films that explored the trials and tribulations of living openly as a queer person. Instead, they were mainly comprised of gay, masculine, white couples who only displayed their lives through a utopic lens. Also, rather than discussing real issues within the queer community or exhibiting queer art, the videos were displays of their shopping excursions, date nights, and TikTok dances.

The algorithm showed me one narrow side of the LGBTQ+ community, and almost every video I saw from a queer creator was made up of this robotic formula. There was almost no identity diversity within the LGBTQ+ umbrella, only the cisgender, happy-go-lucky, gay couple. Even though I would press TikTok’s “not interested” button each time one of these videos, I continued to be bombarded by these shallow videos. As I continued to watch these videos, they warped my perception of how to be a valuable member of the queer community.

The forceful consumption of mindless LGBTQ+ media I was seeing activated my grinds, and I started to doubt myself. Almost every queer person on TikTok looked the same: toned body, clear skin, and a pearly white smile. I know that these features are stealthily heightened by ring lights and excessive artificial filters which create a false sense of how to look; however, seeing the videos still activated my appearance grind. I consumed more of these videos, I began to wonder if my queerness was complete without a “perfect” relationship. Thus, they also activated a kind of “Persona Grind” for me. The “grind” includes the pressure to succeed and adhere to certain unrealistic standards, and social media is consistently one of the leading accelerators for teenagers’ grinds.

Finding strategies to slow down the cogs in your “grind” is not a one-size-fits-all situation. For some teens on our design team, “self-talk” mantras were key and helped reinforce their self-worth. For me, I find the most success and validation from talking to other teens who have shared experiences. As soon as I realized that the queer media I was consuming was having  subtle negative effects on my mental health, I started to talk to my queer peers about the lack of diversity within queer media, which dictates the “right way” to be queer. Through these discussions, I learned that social media also displays lop-sided narrow narratives for other groups within the LGBTQ+ umbrella, such as the lesbian and transgender communities.

The “block” button helps, too. On TikTok, I’ve found the “not interested” button doesn’t seem to have enough impact on filtering out triggering content. After clicking the button, the algorithm keeps sending similar content anyway. Blocking someone, on the other hand, completely prevents me from seeing their content. While there is no option (as far as I know) to block a triggering subject matter or sound, users can block individual users from appearing on their feeds.

Tiktok influencers generate an endless stream of content. Simply put, there’s no shortage of TikTok videos. Now, whenever I see an account that activates my “grind,” I press the block button and engage with a new video that has a different subject matter. There are plenty of other videos out there that can contribute positively, so if an account has any negative impact, I eliminate it completely from my sight.

When social media gives a heavy dose of just one side or version of an identity, it feels like it’s imposing a standard. It’s definitely not just about LGBTQ+ identities. For example, at one point I was seeing a neverending slew of political videos and articles that only displayed one side of the political spectrum. This reinforced the sense there’s a “right way” to be politically active, and a “right” set of opinions to have. Seeing continuous videos of heavy dieting and extreme fitness gives the sense that there’s a “right” physique and even the path to get there.

“The Grind” as a concept and activity is a tool that can help teens reflect on themselves, talk to each other, and share with adults specifically what’s hard for them and how social media affects mental health. Whatever your grinds are, it’s worth considering how social media is making them better or worse.

Eli H. is a High School Senior and a teen advisor to Project Zero’s Reimagining Digital Well-Being project, and has worked closely on a number of research initiatives.