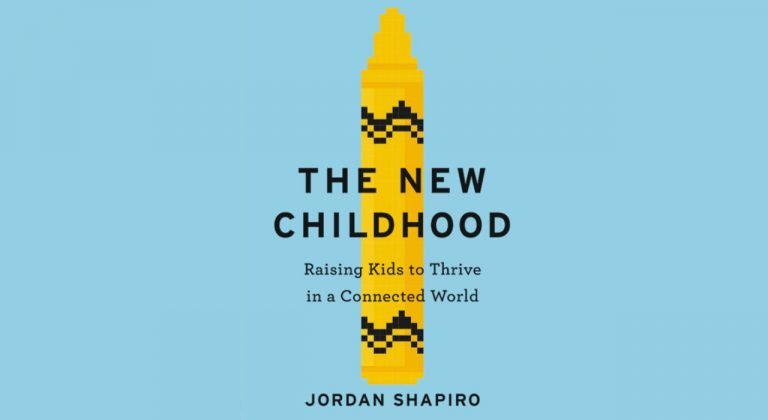 At the beginning of this year, Jordan Shapiro published the book, The New Childhood: Raising Kids to Thrive in a Digitally Connected World. For those who are unfamiliar with Shapiro’s work, he is a senior fellow for the Joan Ganz Cooney Center at Sesame Workshop, a Brookings Institution nonresident fellow at the Center for Universal Education, and a teacher in the Intellectual Heritage Program at Temple University.

Prior to this conversation, I had previously interviewed Shapiro for Edutopia. But having known Shapiro for several years now, I felt like I still had much more to ask, particularly the intersection of his research with that of the Connected Learning Alliance.

Farber: In a connected world, how do we teach digital literacy?

Shapiro: What we almost always mean when we say digital literacy is an understanding that the fact that media can be persuasive or coercive and that you can recognize those agendas. With movies or television, we are usually asking, “Have you thought about who paid for it?”, “Who are the sponsors?”, “Have you thought about how it is constructed so you can understand what it is trying to do?”

I don’t know any better way to teach than to ask kids to construct media themselves. What we really need to do is to get the humanities teachers and literature teachers to include digital persuasion and rhetoric into their classes. That’s where we learn [traditional] literacy, where we learn to understand ideas in books and argumentation and persuasion.

Farber: I’ve heard you ask, “How can we expect Twitter to get smart if we never taught anyone how to use it smartly?” Can you explain what you mean by that?

Shapiro: For almost 25 years—until I became adept at the craft—people have taught me how to write a sentence. They’d say things like, “This sentence is not meaningful enough.” Or, “How could this sentence be better?” We don’t do anything near that for digital media.

In the humanities, we want students to know The Odyssey and Catcher in the Rye. But we also want students to know how to analyze symbolic representation. Humanities classes need to include other forms of narrative media such as games, memes, tweets, and other social media. Imagine if Mark Twain had social media? We’d be analyzing his social media nowadays. It’s time for us to already be doing that. We need to find people who are using social media in positive, thoughtful, and intellectual ways. That will give kids a model, a way to think about social media positively. Then we will end up with less things like cyberbullying because we would have taught them to use these tools in better ways.

Farber: Why should kids in today’s connected world learn coding?

Shapiro: I buy into the conspiracy theory that the reason there is such a push for coding in schools is because tech companies want cheaper labor. So, if we give grants to schools, there will be so more coders in the next generation. Then we won’t have to pay our US staff as much as we do.

Where I do think learning how to code matters is the tech literacy point. It is very important that kids understand how code works because it is what underlies almost everything. It is not going to be possible to teach tech literacy, or new media literacy without learning coding. It won’t even be possible to teach topics like feminism if you don’t understand how coding works, because it is now embedded into predictive algorithms. Analyzing culture without analyzing predictive algorithms is frankly kind of crazy at this point.

To me, the integration coding is that we integrate the ways of thinking that underlie a connected world. And that’s not about coding because we’ve had algorithmic thinking long before we had machines that connected us through algorithms. So, no, we don’t need expert coders. In the same way we don’t turn people into expert poets, we still make sure they’ve written a few poems in their lives, so they understand a bit about what poetry is.

Farber: Where do you see the intersection of connected learning with schooling?

Shapiro: Being able to bring the wisdom of a connected world into an education model is not about mastering a platform. It’s like with coding. We want to make sure people understand how to think in ways that are aligned to our connected values, not that they know how to use tools. Tools are the easiest thing in the world for humans. As you know, if you are willing to focus for a couple of hours, you can master any tool, like Canvas [the learning management system].