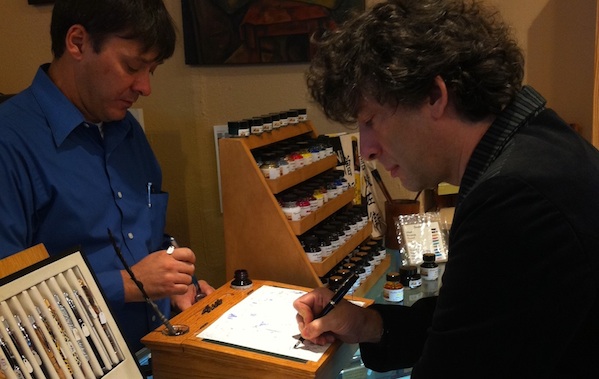 The Telegraph recently published an article announcing that, in the age of Facebook and Twitter, “ancient communication technologies” like handwriting “are current like never before.” The title of the article — “How Twitter made handwriting cool” — is a little misleading in that there isn’t much in the article to suggest how Twitter has any impact on the “coolness” of handwriting. Rather, it stands in as a representative of social media, against which the handwriting “movement” establishes itself as cool by rebelling against this new fad.

Besides establishing this kind of knee-jerk binary between handwriting and new media, there is a lot to nitpick about the article. However, I do think the author, Kevin Braddock, is on to something when he explores the relationship between writing and the joy of tool use. In one sense, the popularity of handwriting and stationary shops can be see simply as examples of nostalgia. Yet nostalgia doesn’t make people write. What makes handwriting enthusiasts write is the physical pleasure of the event. Because a person relishes the experience of writing in a notebook or on paper in general — either because of the physical experience itself or the way in which that experience recalls some past event — the act of writing is performed in order to reproduce that experience. That is, the writing produced by the new interest in handwriting and its accoutrements is a product of the author seeking out the joy of the activity.

Physical and Digital Can Both Inspire

All of which leads me to think that the implication of Braddock’s article — that handwriting is a joyous activity while typing is not — is false. It’s not just the use of pencils and pens that is “a physical experience” or which result from the “body doing something,” as he describes it. Typing at a keyboard or on a phone are also examples of the “body doing something.” The distinction is not between the physical — pencil & paper — and the digital — typing for the screen. Rather, the question is how these activities bring some people joy, and how that sense of pleasure impels them to write. There are numerous examples of authors who develop similar attachments to other writing technologies. Paul Auster has written a book-length essay on his relationship with his typewriter, and the novelist Richard Powers dictates all of his writing. In each case, these authors sometimes describe their attachment to their preferred writing technologies and their writing process with the same sort of ardor that Braddock relates from his handwriting aficionados.

So what does this mean for educators in a world where students coexist with pencils and paper, computers and smartphones? Perhaps our goal for young writers is not to establish one or another category of fetishized objects — pens, notebooks, typewriters, iPhones — but rather to discover the objects which motivate their writing. That is, not for us to claim that pen and paper makes one more productive, but to encourage students to find the particular tool that makes them more productive.

Needed: A Library of Writing Tools, From Pens to Keyboards

One reason I’m a fan of teaching students to be adept with all forms of technology, from pencils to tablet computers, is that such experience is the only way in which they can learn which technologies suit them. Perhaps what schools need is a kind of library of technology, a collection of notebooks, pencils, and fountain pens, electric typewriters and word processors, and other technologies that students can experiment with to find what physical experiences motivate them. How else will students know what technologies best fit their learning styles if they are forced to write everything out by hand (or type everything in a computer)? Some students may find that they do their best note-taking with pen in hand, enjoying the period of rediscovery when they read through them again later, while others may want to type those notes directly into their computers where they can be archived and searched, and accessed via mobile devices. Braddock points out that Moleskines don’t make one more creative; rather, they make one “feel more creative.” Can there be anything wrong with encouraging this feeling in writers?