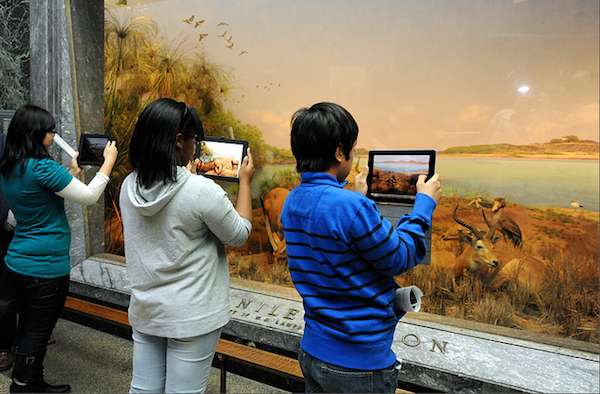 The Pew Research Center’s Internet & American Life Project published a recent report after surveying the role of the internet and social media within arts organizations that have received grants from the National Endowment for the Arts. They found that “the internet, social media, and mobile connectivity now permeate their operations and have changed the way they stage performances, mount and showcase their exhibits, engage their audiences, sell tickets, and raise funds.” Some interesting findings:

The 2013 Mooshme Survey: Looking Back, Looking Forward (survey)
At the beginning of the year I conducted an informal survey, primarily among those in science and technology museums. I wondered what the highlights had been in the past year in the intersection of digital media and museum-based learning. At the same time, I wondered what trends I needed to watch in the coming year in my role as associate director for digital learning at the American Museum of Natural History in New York City. People mentioned all sorts of things, but mobile tech came up time and again, as did many of the technologies mentioned in the NMC’s Horizon Report discussed below. Much of the recent work of the MacArthur Foundation could be seen, from digital badges to learning labs. For 2013, respondents discussed such things as 3D printing, MOOCs, bar scanning…and, of course, mobile. As my colleague Helene Alonso, Director of Exhibition Interactives and Media, put it, it’s worth paying attention to “anything that allows the visitor to gain control over his/her museum experience.”

“Scaling skunkworks projects in museums: radical innovation and sustainable business” (blog)
Jasper Visser wrote a fantastic post on his blog, “The Museum of the Future,” addressing the challenge of bringing radical innovation through digital media into museums. The big question is how one can organize teams to spur innovation. In summary he notes that (1) “Many of us quite grasp the immensity of the challenges that lie ahead of us in this century as cultural institutions” but recommends that we (2) need to eschew ambitious vision statements and working groups since ”most visionary ideas I’ve come across in the past year were epiphanies under pressure, not the outcome of our structured process” and even questions whether (3) radical innovation and sustainable business are opposites on the same spectrum. So how can one do this? His main advice (that I will keep in mind in my new role) is “I think the only needed skills are that you easily make friends with everyone.”

Reflections on a Weekend with Ze Frank and His Online Community (blog post)
Nina Simon, executive director at the Santa Cruz Museum of Art and History, blogged about their recent exhibition about Ze Frank’s current participatory project, A Show. Ze is a force, and if you are lucky you have been swept up in one of his massive online collaborative projects in recent years, from putting the world in a sandwich to contributing to a spontaneous group song (yes, they are ALL hard to explain). His most recent line of videos about “True Facts” about animals launched in December and has received more than 10m YouTube views). As part of the exhibit, the museum hosted “Ze Frank Weekend,” “a quickie summer camp of workshops, activities, presentations, and lots of hugging. It was an opportunity for people who participate with Ze Frank’s projects online to come together in real space and connect with him and with each other.” This is a fascinating idea — bring into the museum an online collaborative community and a ring-leader like Ze and see what happens. So what happened? “It was pretty freaking amazing,” Nina writes. “About 700 people participated over two days, including some who had traveled to Santa Cruz from London, Indonesia, and across the US.” Nina writes about the event but, of more interest, describes what she learned about Ze regarding how to create participatory experiences in a museum (Nina’s area of expertise), like “To get lots of participation, always celebrate the human quality of the work.” A post worth reading and a project worth watching.

Tomorrow’s world: A guide to the next 150 years (infographic)
An infographic, from the BBC, on what the world will look like over the next 150 years, categorized by the areas of computing and robotics, politics and business, science and nature, society, and technology, organized from most likely to least likely. Definitely fun to read and ponder, and not to worry about too much as none of us will be here to see it (or will we?…)

The NMC Horizon Report > 2012 Museum Edition (report)
Every year the New Media Consortium prepares a handy guide to the role of digital media and learning. Recently they have begun to dig deeper into specific communities, museums being one of the latest. The 2012 Horizon Report (museum edition) followed the formats of the others: six technologies described, two expected to rise to prominence in the next year, two more within two to three years, and two others within four to five years. This year they identified mobile apps and social media as crucial for museums in 2012, augmented reality and open content in 2013 and 2014, and the Internet of Things and natural user interfaces for 2015 and beyond. The report describes these six as well as the top six emerging technology topics (followed by key trends and critical challenges). To learn more about how digital media use has changed in museums over time, I interviewed NMC executive director Larry Johnson to get the big picture. You can download the entire report for yourself for free or just check out their latest approach: summing it all up in a nifty video offering. If you only have time to read one thing in this month’s list, you’ve found it.

Barry Joseph, associate director for digital learning at the American Museum of Natural History, writes occasional updates on his observations on the intersection of digital media and museum-based learning. You can follow Barry on Twitter or his personal blog Moosha Moosha Mooshme.