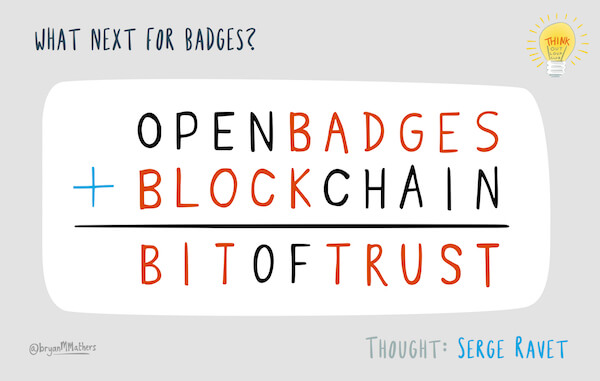 In March 2015, I wrote “Peering Deep into the Future of Educational Credentialing” for DML Central. In it, I explored the potential for the blockchain technology (best known for underpinning Bitcoin) to add an extra layer of trust and verification to Open Badges. Now, a year later, we’re a lot closer to that reality than I originally envisioned. The diffusion of innovation has moved so quickly that even government ministers are excited about the possibilities afforded by the blockchain.

Let’s back up a bit first. The great thing about the Open Badges Infrastructure is that it’s a distributed, evidence-based system of credentialing. There are no gatekeepers; anyone can issue, earn, and display badges. Similarly, the blockchain is a distributed, open “ledger” to which anybody can add evidence and information in the form of cryptographic hashes. Long story short, pairing blockchain technology with Open Badges allows for trusted credentialing on a level usually reserved for international banking.

We’re already beginning to see some innovation in this area. For example, Holberton School announced that they were the first school in the world to deliver their certificates using the Bitcoin blockchain. Likewise, Stampery has started issuing certificates using blockchain technology. MIT Media Lab is also exploring something similar.

Using the blockchain for mere digital certificates is like strapping a rocket onto a Model T Ford. It may allow you to go faster in a straight line, but doesn’t afford you any new options. It is perhaps what is usually called a “sustaining innovation.” Using Open Badges with the blockchain is a much more disruptive proposition. What if everyone had the keys to the kingdom?

There are two main ways in which I think using Open Badges with blockchain technology will lead to interesting developments. As Serge Ravet has written one of these is to engender what he calls “bits of trust.” In other words, the levels of authenticity that the blockchain can prove, when coupled with a gatekeeper-less credentialing system, may lead to the disintermediation of educational institutions as we currently recognise them. In plain English: blockchain plus badges equals rocket fuel for verified, trusted credentials. Everyone gets to point to a rock-solid “proof of learning” that they can use anywhere.

The other major development is a reduction in the cost of issuing of Open Badges at scale — effectively to zero. While there is no cost to issuing a few badges here and there using one of the many badge-issuing platforms, doing so at scale requires an “enterprise level” plan, or development of your own system. Both cost in terms of an off-the-shelf subscription, or paying developers. Once badges are on the blockchain, the financial cost of securely storing the data associated with each badge is, in real terms, reduced to zero.

Open Badges is a maturing ecosystem and community. Likewise, although Bitcoin has been around for longer than badges, it is only recently that the true potential for blockchain technologies is being realised. There are many blockchains and approaches to using the technology. Perhaps it is time for someone, possibly a government, group of universities, or non-profit NGO, to step in to offer blockchain badges as a service?

I’m increasingly optimistic about the future of Open Badges when used in conjunction with other emerging technologies. The opportunity for anyone to issue cryptographically-signed credentials with the proof in a public ledger sounds like a geeky thing to be excited about. However, as with many developments in technology and society, some of the most interesting things happen behind the scenes.

Many thanks to Eylan Ezekiel, Oliver Quinlan, Kerri Lemoie and Doug Levin for their comments on earlier drafts of this article. Their expertise has been invaluable, but any errors remain my own.