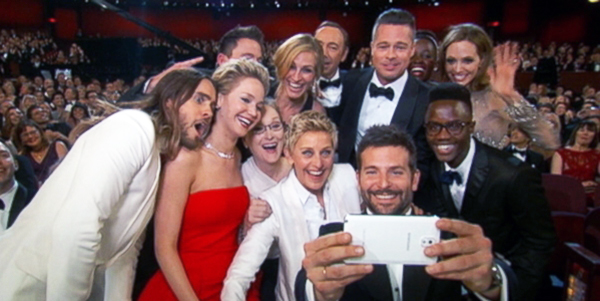 Random autobiographical story: When in school, as part of our elocution classes, we had a dragon for a teacher, who used to prowl around with a menacing looking wooden measuring scale, as we obediently enunciated our words and practiced tongue twisters in an attempt to improve our diction and pronunciation.

“She sells shellfish on the sea shore” the class chanted in a well-trained chorus. Every voice a whimper, trying to find comfort in remaining anonymous. But, in the middle of the group chanting, the scale rose and there would be silence. One petrified kid was stared at, like Smaug at Bilbo in his lair. The victim was asked to recite the tongue twister all alone, separated from the shelter of the crowds.

“Selfies is not a word” the dragon snarled, invisible heat plumes rising from the nostrils. The kid, who still has occasional nightmares of those raps on the knuckles, feels like Cassandra. It would be funny, he thinks with dark irony, if somebody these days said that ‘selfies’ is not a word.

Brief summary of things as they have been: In my last post, we had looked at the irritation and bafflement that the ubiquitous discourse and presence of selfies seems to produce for the study of digital objects. I argued that selfies embody the paradox of digital objects where they hide more as they reveal more. As they become objects in the service of Big Data, adding to the streams that make our data self, they also hide the Big Analytics, which decide the architectures of circulation, the protocols of control, and the filters of visibility that get flattened under the glossy surfaces of the selfie.

Click-bait introduction: In this second post of the three that I want to explore the selfie through, I am going to talk about how the selfie is selfish (and you are free to wonder about whether shellfish have selfies). There has been much talk about the selfie as indicative of a culture of self-indulgent narcissism that the social web is producing. The selfie is inward looking — a perversion of the great innovations of the camera to capture the external reality, positioning the picture taker as not only the creator but also the subject of the picture. And yet, it is not a critical reflection of introspection into the inner mechanisms of the self. It is empty. It is momentary. It is formulaic and memetic.

While I do not subscribe to any of these accusations that the poor selfie is constantly submitted to, there is perhaps another way to read the selfie as selfish. And this is not about the human. It is one of the banes of contemporary digital cultures that eventually, we boil down to looking at the human; making the digital only an excuse for entering the discourse — need to pout and apply flattering filters. I posit that the selfie marks an aesthetic shift which makes it an object in service of itself — and hence, selfish.

No more wise-ass titles. Stay calm and keep reading: In most studying of the selfie, it has been easy to see that the framework that it has been studied through is one that we borrow from older visual practices and meaning-making practices. The frame of representation and visuality is so strong that we look at the selfie as we have seen all preceding still images, analysing the different content-based and representational information that the image betrays. However, this is not, strictly speaking, the vocabulary, grammar or syntax of the digital universe that the selfie occupies. While the digital has a continuum with older media cultural forms, it does provide a very strong sense of rupture. Take the notion of a website in our Web 2.0 worlds — the website, as we understand it, from its early days of Geocities (which was more than 2 decades ago, btw) — to the new information management portals, has changed dramatically and drastically.

I am now, only mansplaining, when I remind us that the website might have representational objects but in itself, it is not a representational object. So, when you go to your Facebook page, for instance, you know that it does not exist. There is no such thing as an original Facebook page that your page represents. Similarly, like the flowing river, you can never go back to the same Twitter feed twice. A Tumblr post, by the time you return to it, has changed. The websites post-Web-2.0 revolutions do not represent an external reality. They are in a state of simulation. Where, they simulate themselves. The Facebook page does not have an original that it tries to re-present. In fact, it references and simulates itself, much like Wikipedia, which is also a completely self-contained and self-containing universe.

The selfie, then, even as it might look like an older representational object (like the photograph from a photo album or indeed, like the deformed self-portraits of angst ridden painters), needs to be understood through simulation. The selfie, not as an extension of older forms or representing an external reality. The selfie, as a simulation of itself. This can happen only when we distinguish between the form of the selfie and the content of the selfie. It might be possible to narrate the selfie so that we can look at the individual elements that make up the frame of that particular image. We could make discerning and insightful observation about the class, society, consumption, youth cultures etc. But in doing so, we are subjecting the selfie to a framework that is not its own. To really look at selfies, to study and understand them, we are going to have to study them as born digital objects, and largely selfish — only explaining themselves through their endless loops of circulation and instant digital deaths as they get buried under incessant information flows on our data streams.

The selfie is a selfish object — an object of circulation, an empty signifier that prompts and generates a particular sociality,  the focus point of gathering data rather than meaningful in itself — and is perhaps the best studied in the recent cases around revenge pornography that have taken such a huge share of public and legal attention around the world.

In the landmark law that was passed in California in 2013, bringing down Hunter Moore and his acquaintance Garry Evans, propelled by the mother and daughter duo of Charlotte and Kayla Laws, who prosecuted them, images of Kayla found their way on this website, offering some interesting prompts to understand the nature of the selfie as a form rather than as content. While the law did ban IsAnyoneUp and Moore and Evans are facing multiple criminal charges, has a particular caveat that is worth mentioning: The case against Moore and Evans was won, not on grounds of moral reprehensibility or hate speech and violence against women. It wasn’t even won on grounds of protectionism or safety and security of the victims who were invoked on these websites. Eventually, the court case was won, because Moore and Evans were found guilty of hacking into Kayla Laws’ computer and taking images of her which she did not put into circulation. These were images taken by somebody else, which had been stolen, and that led to a downward spiral for Moore and Evans.

Tellingly, despite the indictment of the nefarious duo, the law does make a clarification that selfies — nude or sexual pictures of one’s own self, will not be given the same protection as would be given to others capturing images of you. So, if a third person has taken sexual images of you and is circulating them on the Internet with the express purpose of exposing and shaming you, then you will be protected by such a law. But, if you took a selfie of yourself, then you are at everybody’s mercy. The selfie cannot be contained in a frame. The selfie is not the same as an image taken by somebody else. The selfie does not have an original beyond itself. The selfie is not a reference to anything, according to this law, that is your own, your personal, or your bodily. It is, in fact, a reference to the networks of circulation it is going to enter. It is in never-ending, always stretched temporal and physical space and cannot be regulated or protected through older laws that cover visual practices.

This is how selfies are selfish. They create self-referential loops of infinite but decaying circulation, spreading through viral contagion and then, rather than infecting anything else — the networks they travel on, the devices they are stored in, the clouds that they dwell on — they kill themselves. And, immediately, are replaced by something else, that looks and feels like the older selfie, but is still different. The selfie is dead! Long Live the selfie!

This shift that the selfie invokes, from representation to simulation, has, then, very clear ramifications for our narrative structures of representation politics and rights based discourse that always imagine that the self-in-storage is the creator of information and that protecting and governing that information, as well as granting the self-in-storage more access and better control would ensure an informational democracy and equality. The selfish selfie, reminds us, in its inwardness and flatness, that it is not even about us. It is about itself. And this mode of approaching this born digital object has interesting challenges thrown up for how we think about ourselves in the limbo of the interwebz.