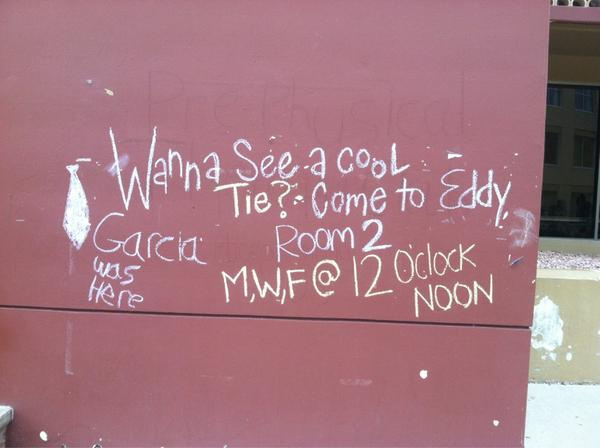 I want to talk about the nature of writing in today’s age of participatory media. In particular, I want to talk about how writing within my classroom has helped foster community amongst the students. In fact, the subtitle of this post could be, “How Wearing a Tie to Class Spurred Community Building.”

For one of my undergraduate composition courses, my students and I meet three times a week in a small computer lab with LCD projections on all four walls, a smart tablet for the instructor and a document camera for displaying anything that might not be on students’ screens. The contrast from my previous environment, a parade of high school classrooms all in disrepair, is startling and speaks volumes to equity issues affecting public education for students of color more than fifty years after Brown Vs. Board.

For the first time in my teaching career, I am in an environment where the on-campus technology, at the least, rivals the kinds of technology available to my students at home and in their pockets. As a high school teacher, I struggled dealing with the school’s limited digital tools while often disregarding school policies to allow students to utilize mobile devices within my classroom. This deliberate insubordination was my effort to give my students the tools necessary for critical English education in the 21st century. Now, as an assistant professor at Colorado State, my students’ lives are just as saturated with media, but they are also able to harness their digital literacies easily within the classroom setting. In looking at the writing opportunities and pedagogical pathways opened up, I want to argue here that the use of these digital tools in my classroom has meant that the writing I ask my students to produce is:

The first two of these attributes were components of the writing practices I asked of my high school students. It is the idea of encouraging public and provocative writing that I feel is different about how my current classroom operates. I want to underscore that these changes aren’t because of the prevalence of technology in our classroom but because of the ways technology has shifted my class’s relationship with writing in general. By way of explanation, I want to describe some of the digital and non-digital writing my students are engaged in this semester.

A bit of background about this class: Composition 301d, “Writing in the Disciplines” is a required course for undergraduates who plan to become English educators. The focus is on the elements and style of writing. As I designed my syllabus for this class, I wanted to make this a class focused on writing publicly and on preparing preservice teachers to be able to advocate and articulate their expertise.

In setting up my classroom practices within the media rich environment of my composition course, I was determined to integrate the technology that I find important in my day-to-day practice as fluidly as possible. This meant that the class shares and writes on a shared Google document that acts as a depository for each class’s agenda. It also meant my students and I established a class blog to continue our writing exploration outside of the time restrictions of an all-too-brief fifty minute class period. And, as it is something I tend to rely on throughout the day, we established a class backchannel and Twitter hashtag.

At first the sheer amount of URLs and places for students to write was confusing and overwhelming. I wanted to provide as many opportunities for different kinds of writing within the class as possible. Though there was some initial resistance, my students dutifully joined Twitter and began sharing posts and commenting on work using our course hashtag.

What I found striking about the class use of our backchannel (a basic chatroom using TodaysMeet.com) was it primarily functioned as a social space. After the first day that I introduced the backchannel to the classroom, the only comments generated on the board (aside from administrative notices from me) were complimenting the ties I wore:

Just to be clear, I think this is great. Not only because my clearly excellent fashion sense was acknowledged but because the backchannel helped an unfamiliar class with ‘that new professor’ become slightly more welcoming. Though the backchannel wasn’t used to elucidate the academic discussions we were conducting, the discussion of my wardrobe choices helped elicit smiles from students and helped soften the rough corners of classroom community. In short, the inside jokes of our class backchannel helped foster a familiar and inviting space for students to share writing and critique. Further, from a classroom management point of view, I also appreciated that the off-task talk about clothing was relegated to a digital space–the class remained focused on the daily agenda while also being able to socialize in ways tangential to their learning.

And then, one day, the backchannel discussion went public.

Chalk: The Hyper-Local Twitter Channel
It started like this: I saw a message in chalk on the building adjacent to where our class meets: 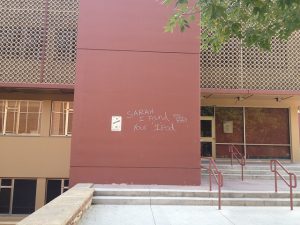 I was fascinated by the way the purposeful and public writing effectively delivered a message for a very small audience of one person. In some ways, the public writing here mimics the online practices I see on my Twitter feed: I see friends asking for advice and conversations held in public. A digital space simply amplifies this conversation beyond the present eyes of wandering college students. My curiosity got the better of me and I texted the number on the wall, asking if Sarah had claimed her iPod. A few minutes later the reply arrived: 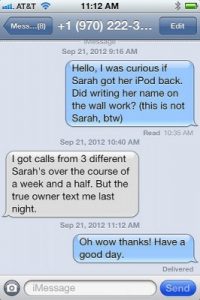 Inspired by the very college-y phenomenon of attacking walls and sidewalk with chalk, I armed my composition students with small buckets of chalk and told them to go forth and write. The prompt was intentionally vague and open ended: “Grab a partner. Have one? Good. Now, grab some chalk or post-its or tape, or whatever you think you’ll need. Go outside and critique or proclaim something publicly. Take a picture of your writing.”

The results reimagined the Colorado State University campus in exciting ways. One group used their chalk like a teacher’s red pen and edited and critiqued pre-existing chalked statements. 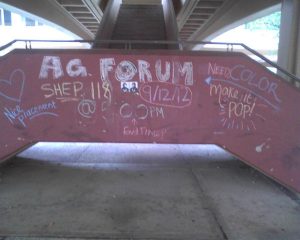 Another group highlighted an individual soaking up the sun and playing the harmonica. 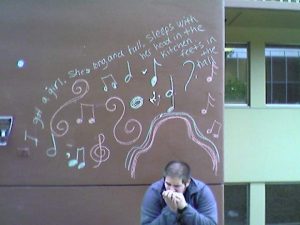 One pair of students seemed to like the name of the person our department’s building was named after. 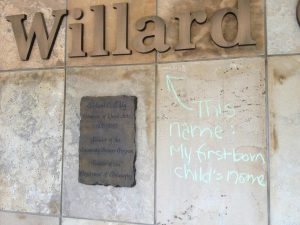 And one group … well … they brought our class jokes about my persistent wearing of ties (half-Windsor, if anyone is wondering) to the public (see banner image).

Since then, a @GarciasTie Twitter account updates the class about ties worn, faculty have inquired about the advertisement for my class, and–on Halloween–the entire class wore ties to school. To be clear, wearing ties was never a focus of the class curriculum, as our course goals have made clear, the time we spend in this class focuses on writing, audience, and argument. However, the playfulness of purposeful and public writing ultimately yielded the greatest gains within the classroom. Having something silly to laugh at in each class, whether in a backchannel, on Twitter, or on the walls of our campus, has helped bring the class together.

Public Writing For Community Development
Class inside jokes are common. I am reasonably certain that if I run into students from my first ESL class eight years ago and say the word “clown,” they will still giggle. There are three key differences between how my class references my tie and traditional class jokes:

These differences speak to the potentials of playful yet studious application of writing and composition in public ways. While I realize that, compared to topics that may vex and plague the DML community, a lengthy conversation about an isolated class joke may seem inconsequential, it is important to consider the larger pedagogical implications of what transpired in my classroom. While the importance of digital literacies and the importance of shifting teaching practices in a participatory culture are being more broadly acknowledged, the social components of these changes are likely ignored. The new digital literacies and the kinds of writing dispositions they promote bring with them new ways of building and cultivating community within a classroom. In my charge of guiding my students towards public writing in various genres and with various technologies, my class and I discovered that these tools can also be used to empower students toward familiarity and comfort within a classroom. If the first step toward powerful learning is acceptance of and within a community, the digital and public writing that my tie yielded are invaluable.