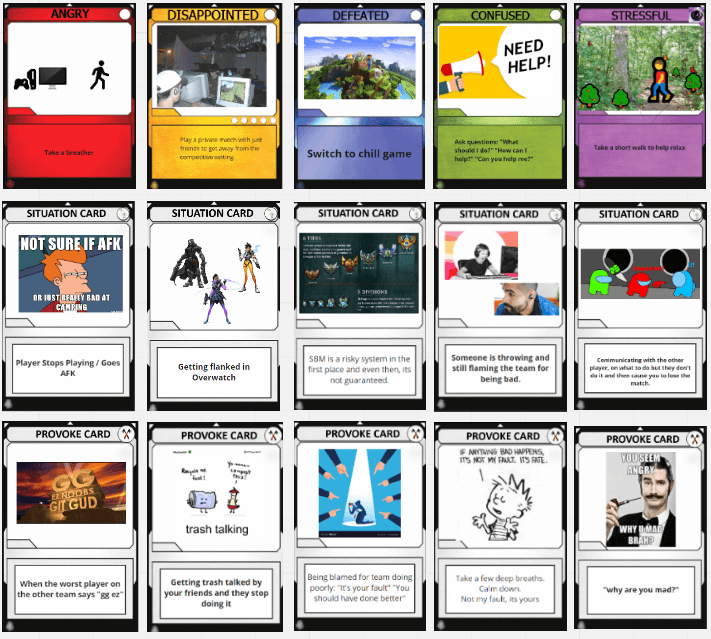 Working with youth and games is something that we are passionate about. Our research team (GAMER Group and Digital Youth Lab) have led multiple projects at the UW Information School focused on co-designing with youth to support youth and their communities, including co-designing with youth in public libraries and co-designing VR content with teens to support their mental health and wellbeing. We were very excited when we were approached by Katie Salen Tekinbaş’s research team at UCI about an opportunity to contribute to the project between the non-profit Connected Camps, the North American Scholastic Esports Federation (NASEF), and The Seattle Public Library.

The project came to us at a perfect time. The Husky Union Building (HUB) had recently opened the Esports Arena and Gaming Lounge to serve as a center for supporting students interested in esports at UW, and the GAMER Group had been interested in exploring ideas to support the esports program. I was previously the chair of the task force and collaborated with a group of faculty, students, and staff to create the Community, Inclusivity, and Healthy Gaming Recommendations for UW, which further motivated me to find ways to support esports players for more inclusive and healthy gaming. We were excited to use our research expertise and experience and involve teen esports players, UW esports players, coaches, and librarians in the co-design process to explore ideas to support players’ mental health and wellbeing.

During the program we ran a total of 16 codesign sessions that explored different aspects of esports gaming, such as how players and coaches think about health and wellbeing in the context of gaming, toxicity in gaming, sleep, and tilt. The codesign team consisted of 5 researchers from University of Washington; a Wellness expert and 6 coaches from Connected Camps, the non-profit we partnered with on the project; two librarians from the Seattle Public Library, and 15 teen players from the Rainier Vista Youth program. The sessions were held between August and December 2020.

Screenshot of the zoom co-design session

In this post, I provide an overview of Tilted, a card-based game focused on helping players learn about different strategies for managing stress and anxiety during gameplay, communicating with their teammates about how tilt affects them, and thinking collaboratively about how to best support each other as teammates. The game emerged from co-design sessions with youth, which were led by our University of Washington team.

The last eight codesign sessions specifically focused on tilt, its impact on players, and relevant strategies to manage tilt. Tilt refers to a specific mental state of players that occurs when they get frustrated and angry about the gameplay, and these negative emotions further deteriorate their performance in the game. Tilt occurs commonly in the context of competitive esports gaming and affects many players, including our players and coaches who participated in codesign sessions. We wanted to explore if there were ways we could help teen players think about and manage tilt. Most importantly, we did this with input from the players themselves.

We wanted the teens enrolled in our esports program to be part of the design in order to inform us about how they really feel about their mental health and wellbeing, and also influence what we design. Our research team collectively has a lot of experience working with youth in codesign projects. However, one of the biggest challenges we had to face in this particular project was not being able to see the youth in person due to the COVID-19 pandemic. All of our sessions were conducted online and thus, the in-person interactions that typically help build the rapport between the adult and youth participants were not possible. Furthermore, many youth participants opted to keep their cameras off for various reasons, which also hinders building rapport. Because of this, we scheduled some hangout sessions before the codesign activities that were dedicated to informal conversation and games (like Jackbox games) which the youth participants were excited about. This certainly helped getting to know the players better, and loosened up the environment so that the youth were more willing to speak up during codesign sessions. 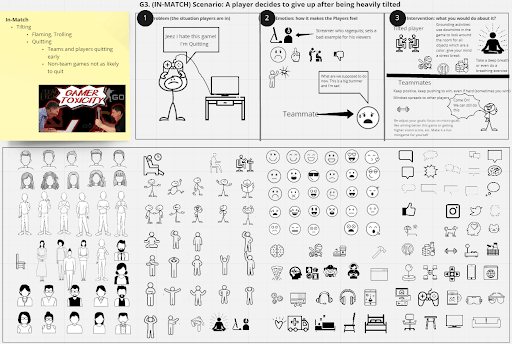 Over time, the concept of a “tilt deck” emerged. A “tilt deck” is a set of cards that can be used pre-practice or pre-match by players and coaches to anticipate situations that may tilt players, which helps them to discuss strategies for managing the consequences of adverse gaming situations. The deck, which is being developed into a more formal digital card game “Tilted”, includes three card types: “situation cards” depicting various situations that can cause someone to tilt, “heal cards” showing a wide variety of strategies that can be employed in such situations, and “provoke cards” that could worsen the situation that is already tilting. 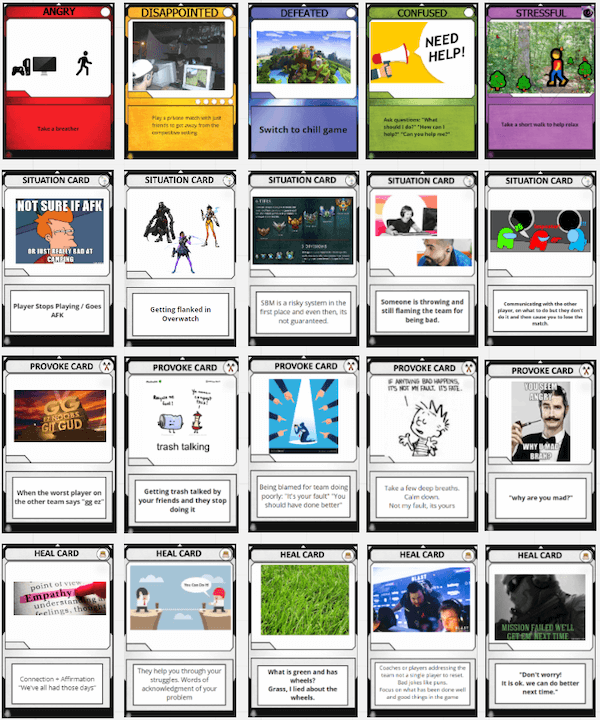 Examples of draft tilt cards created in the codesign session

The game is currently undergoing additional playtesting so that we may understand how teen players respond to it and the extent to which it is effective in helping players expand their emotional management strategies when they experience tilt. Our key takeaways include a recognition that 1) not all strategies work equally for all players and in all the situations (e.g,. humor can work really well for certain people, but it can backfire for others), 2) people generally deal with being tilted through individual coping mechanisms rather than communicating with others, and thus 3) it is often difficult for coaches and players to help others when someone gets tilted, despite the fact that group strategies are critical in team situations. We have found that playing the game also has additional benefits, such as: exposing players to a wider variety of strategies and prompting players to think about ways to creatively employ different strategies to address certain situations. 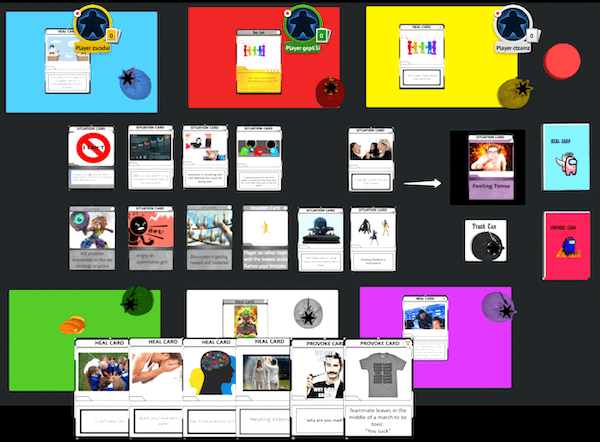 We will continue to refine Tilted based on data and feedback generated from playtesting throughout the summer. After conducting playtesting, we hope to distribute it more widely so that those who are interested can play it. Our plan is to continue to collect playdata and user feedback, which will not only inform us about how to improve the game itself but also provide insights as to how much players and coaches understand and communicate about being tilted. It is our hope that this game can support players and coaches to strengthen their teamwork by allowing them to talk about tilt and forging opportunities to support each other when they get tilted. Furthermore, we will continue to explore ways to support the mental health and wellbeing of esports players and other gamers by focusing on solutions that are social and collaborative.