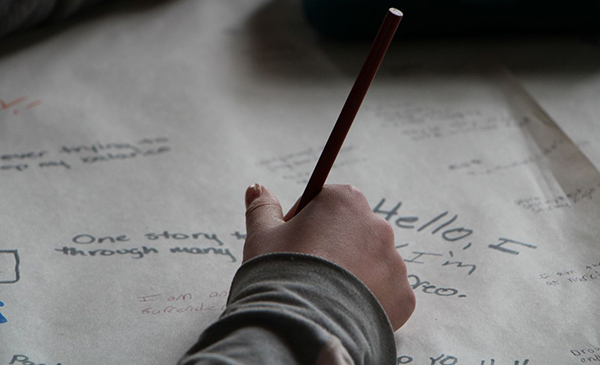 When their writing is read and praised by others, “bullies become class leaders — they want attention, acknowledgement, appreciation. In this case, appreciation of creative risk.”

Journalist-turned educator Geoffrey Gevalt is speaking of the Young Writers Project, an online writing magazine and community by and for more than 3,000 young people: “This site is a community that provides peer, mentor and professional support through reactions to individual posts, projects (youth-led, artist-supported initiatives) and, formal learning Playlists — offered for a small fee (or free if you can’t afford it.) This community has only one rule — RESPECT — which creates one of the most civil spaces on the Internet. We value that; if you know that your ideas will be supported, it’s easy to try something new, to take a risk.”

This online writing community is rooted in Gevalt’s belief that students learn writing and more when they have an opportunity to write about things that matter to them, outside their school assignments, and give and get feedback from peers, not just grades from their teachers. Gevalt was a reporter, editor, and newsroom leader for 33 years, mostly for newspapers, but also with the Associated Press. He was a juror for the Pulitzer Prizes in Beat Reporting for two years and won the George Polk Award for two investigative series.

The Young Writers Project began as an independent nonprofit in 2006; since then, the site has seen more than 400,000 posts, “almost all of which have been respectful and civil. We do not moderate; that handful that were slightly over the edge became teaching moments, were revised by their authors and republished.” YWP has published the best work of more than 17,000 young people in newspapers, on radio and TV, on news websites, and in their monthly digital magazine, The Voice. Every month, the community offers three to five new formal interactive learning workshops in writing and digital media: “This month’s highlighted workshop has been a playwriting class taught by a Middlebury College playwright and his advanced playwriting class.”

Don’t take Gevalt’s word for it: check out (and use!) YUP’s Schools Project digital classroom, digital teachers site, huge collection of writing prompts (most of which came from the community’s Youth Organizing Committee), the responses to the prompt “fierce urgency of now” (from a speech by Martin Luther King, Jr.). Recently, the Doris Duke Foundation for Islamic Art’s Building Bridges Program announced a $90,000 grant to YWP for “a project led by youth, including Muslim Girls Making Change, to engage Muslim and non-Muslim youth in Vermont with storytelling, performances and publication of work that expand their understanding of Muslim cultures and related social justice issues.”

Clearly, Gevalt and colleagues are hugely successful in encouraging young people to take risks with their writing, share their efforts with peers, and tackle issues that matter. Watch my interview with Gevalt to get more – directly from the mouth of a master teacher.