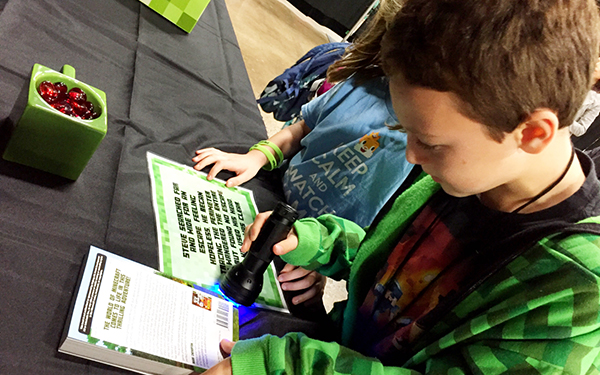 Escape Rooms first came to America in 2012-2013 from Asia and Europe, quickly spreading across the country. As defined by Professor Scott Nicholson, “escape rooms are live action team based games where players discover clues, solve puzzles, and accomplish tasks in one or more rooms in order to accomplish a specific goal (usually escaping from the room) in a limited amount of time.” It should come as little surprise, but before long, innovative educators were adapting the escape room format for a wide-range of content. 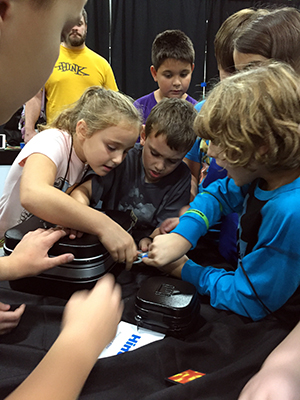 Last year, at Minefaire, I met Adam Bellow. Adam was honored by ISTE in 2011 as Outstanding Young Educator of the Year. He founded both eduTecher and eduClipper. At Minefaire, however, Adam was doing something new: running a Minecraft-themed escape room, promoting his growing company Breakout EDU. Supporting educators to bring escape rooms into learning settings, Breakout EDU offers kits and curriculum for an emerging community of games-based learning educators.

Before long, we developed a program at my day job (the American Museum of Natural History)  to work with youth to create a prototype for an escape room, with an astro theme, using mixed reality (a Microsoft Hololens). Between advising sessions, Adam and I sat down to talk about the history of escape rooms, education and digital learning.

Adam, for the uninitiated, just what is an escape room?

Escape rooms are physical spaces that started popping up around the world about a decade ago where small groups of people (usually 4-10) get locked into a room and are challenged to solve a series of puzzles in order to escape. While the theme of the room and the particular scenarios vary drastically, from things like “Escape the Zombie Hospital” to “Escape the Prison,” there are usually a few key similarities between all the games.

In most games, the players have a 60-minute time limit to escape. Players are encouraged to collaborate and work as a team — even if the group is made of strangers. Players are watched by a facilitator (usually on closed circuit TV systems) and can make use of a limited number of hints when needed. These rooms have become quite popular and can be found in most major cities around the world.

I went to my first escape room a year and a half ago with some friends. It was a blast but I couldn’t see how the puzzles might work in a museum context. A few months later, at the Games, Learning and Society Conference, I experienced a version of a room that had been developed by Scott Nicholson, at a historic fort in upstate New York. This time, the puzzles had historical resonance, connected to the history of the fort, and the way soldiers in the revolutionary war had used cryptography. Hazzah! Escape rooms could be used for public education. When did you first come across escape rooms, and when did you realize they had educational potential?

Scott is a great guy and has been a big fan of Breakout EDU.

His White Paper on escape rooms is invaluable and a great place for anyone to start.

I personally found out about escape rooms the week after my friend and co-founder of Breakout EDU, James Sanders, went to one. He was telling me about how he had gone to an escape room with some educators and students. He had never seen students work so hard to solve really difficult problems in the classroom and wanted to harness that excitement and level of grit to be part of the school day. That is when Breakout EDU was born.

James told me about the idea and I have to admit that I had my doubts. But, they were all removed when I had the privilege of having my first experience of an escape room as a player of the very first Breakout EDU experiment — where there was a locked bag and teachers had to solve a series of complex puzzles in order to break into the bag. Over the following few months, James and his friend Mark Hammons helped to codify the idea and the rest is history. It was clear from the first minute of the game that this was lightning in the bottle. I was immediately on fire with ideas on how this platform in the hands of educators and students would help to change education.

So what is Breakout EDU? How is it helping educators teach content?

Over the next several months, the idea of creating a Breakout EDU box was solidified, a physical kit that could be locked with numerous and different kinds of locks relating to academic puzzles. We began creating and selling these kits in addition to developing an online platform where we could host (and allow others to create and host) games using the materials that we were selling. What started with a small handful of games has grown into a wide-ranging online library of educator-created and shared games that work with the Breakout EDU kit. There are games for all ages and targeting all subject levels. If there isn’t a game that is perfect for your classroom, then the option is always there to use our templates to create one that is and we love to see those games shared back to the community of educators on the site.

Let’s explore the intersection of escape rooms and digital learning. Where do you see the two come together?

Almost all of the Breakout EDU games have both physical and digital elements. Whether it is using the black light to illuminate coordinates that can be researched on the Internet or using automated forms and digital puzzle elements that work in tandem with the real world. We recently launched a series of computer science games that focus on coding problem solving skills. The future is bright for more higher tech puzzle elements. For example, we love games like “Keep Talking and Nobody Explodes” that engage players in VR and the real world at the same time.

The idea of incorporating elements like blended reality into escape rooms and Breakout EDU is something that we are starting to see and experiment more with. Like all other game elements, when done well, it enhances the experience for the players.