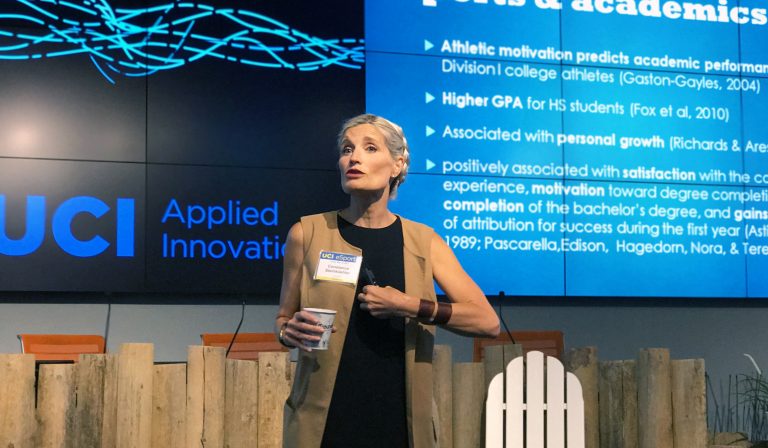 In fact, video games and esports “leverage and require an incredible amount of cognitive intellectual labor,” she said at UC Irvine’s eSports Symposium. “Video game play actually leads to higher problem-solving skills. And, those higher problem-solving skills actually lead to higher academic grades…. You can start to see where games, rather than being in competition for so-called intellectual pursuits or academic performances, actually are enhancers.”

The UCI professor of informatics and president of the Higher Education Video Game Alliance gave an overview of research findings from studies conducted over the past decade. Among the results:

Stereotypes that video game players are anti-social are untrue, emphasized Steinkuehler, who is part of UCI’s Connected Learning Lab. “Game play is done in collaboration and in tandem with other people. Even when you play on one screen, you tend to rely on a community of interests that actually drives your performance.”

When looking at athletics and academics, she said, research shows that athletic motivation predicts academic performance. In other words, Steinkuehler said, “kids who really want to be good at competitive athletics tend to be really good and competitive in school. You see higher GPA (grade point average) for high school students. Team sports are associated with a long list of positive impact, such as personal growth, motivation toward degree completion, persistence, grit, tenacity, internal locus of control, the belief that your performance is based on how much work you do and that it’s a skill you can improve. Sports amplify academic success.”

As for esports, she said, not much is known. That’s why she and her UCI research team is launching a study of UCI’s video gamers in the fall. The study will be asking how students’ game play aligns with what they’re doing in school and how it amplifies in ways that endure. Scholars interested in helping conduct the research are invited to contact Steinkuehler by email at const@uci.edu.