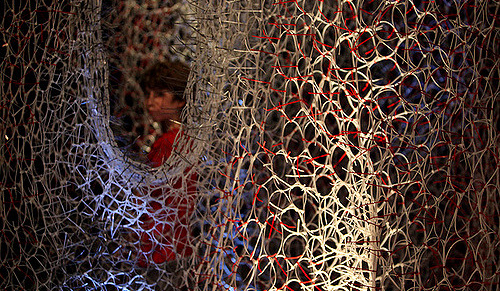 Earlier this year, I began to detect a growing interest in the idea that “neurotechnologies” such as brain-scanners and Brain-Computer Interfaces (BCIs) could be applied in education. A new field of “ed-neurotech,” I wrote, seemed to be emerging as part of a wider “neurotechnology revolution.”

Ed-neurotech brings together educational technology development with aspects of educational neuroscience to monitor students through neural data. Some new developments suggest “neurofeedback learning” software might be used to train the brain, “neurostimulators” might improve cognition, or that “neuro-adaptive” software could be used to enhance personalized education.

Students’ neural information and brainwaves have become a seemingly legitimate focus for data-mining and a target of neurotechnology-enhanced learning. What neurotechnologies are now being applied to education, and to what purpose?

Scanning and Sculpting the Learning Brain

The academic field of educational neuroscience research itself is growing fast. Many of its practitioners use established neurotechnologies such as brain scanners to study the brain as it learns. A distinctive (albeit controversial) contribution of ed-neuro is its claim that the effects of poverty can be scanned from the learning brain.

Evidence from brain-imaging suggests socio-economic status is correlated with the volume of certain parts of the brain related to learning. Scans of the “neurocognitive profile” of socioeconomic status indicate a causal link whereby “growing up poor can keep a child’s brain from developing.” Meanwhile, “the brains of those with higher family income and more parental education had larger surface areas than their poorer, less-educated peers.”

Ed-neuro is also driven by concerns that education systems are not adequately preparing students for a complex digitized world.

According to a recent editorial on brain science, education and learning, “the fourth industrial revolution is pressuring us to develop a wider range of multifaceted, multidisciplinary, complex, and integrated competencies, for which many education and learning systems are yet to be ready. … Brain science is now providing new discoveries about the basic mechanisms of learning…. Thus, understanding the ‘learning brain’ can provide an additional tool … to facilitate students’ learning and development.”

As the editorial added, for educational neuroscientists, learning “at a neurobiological level literally means changing the structure, functioning, and connectivity of young brains,” and, therefore, some are seeking tools and methods to “‘sculpt’ the unique brain of an individual learner.”

The idea that students’ brains can be sculpted to cope with contemporary sociotechnical change has catalysed efforts to harmonize ed-neuro insights with ed-tech development. As Jessica Pykett, Selena Nemorin and I detailed, the understanding that the learning brain is “plastic” and malleable has begun to inspire technology companies to develop systems that can not only scan the brain but sculpt it, too.

Wearable Brain-Computer Interface neurotechnologies are the next frontier for brain scanning and sculpting. They rely on electroencephalography (EEG) sensors that can detect brain activity from electrical signals when neurons activate. At the cutting edge of BCI R&D, MIT Technology Review reported, “recording from large numbers of neurons is essential if engineers are ever to create a seamless, high-throughput data link between the human brain and computers” in order to “make a ‘brain modem’ really possible.”

BrainCo is a spin-out from Harvard University’s Center for Brain Science and Graduate School of Education. The recipient of a substantial $20 million investment, it has developed the Focus One BCI headband to record brainwave information through noninvasive sensors. The company claims to be the first producer of a neuroheadset specifically to be marketed to schools.

The Focus EDU application of the headband is designed to report real-time student brainwave data to a teacher’s dashboard to indicate levels of attention and engagement. It claims it “accurately translates brain signals into attention level,” and that teachers can use the brain-data dashboard to “easily reflect on their teaching methods and content to achieve further improvements in class performance” and “optimize student engagement in the classroom.”

According to EdSurge, the ambition of BrainCo is to translate brain data into text — “brain typing” — and to compile the “world’s largest brainwave database” so that it can quantify the “invisible metric” of student engagement as brain data.

Moreover, by compiling a database of brain activity from large numbers of users, its founding CEO claimed to EdSurge, BrainCo intends to “use artificial intelligence on what will be the world’s largest database to improve our algorithms for things like attention and emotion detection.”

In other words, BrainCo plans to use students’ brainwave-data as a training set to optimize its algorithms for enhanced student engagement detection. It is seeking to augment the gaze of teachers to see inside students’ skulls through a brain-data dashboard. In this way, teachers are encouraged to become experts of engagement who can gain student attention through pedagogies and instructional materials that measurably stimulate the brain.

Another brain-sensing headband has been used to reduce problematic classroom behaviours by promoting “mindfulness” in schools.

Muse, a “personal meditation system,” is a commercially-available neuroheadset with EEG sensors and a neurofeedback app to alert users in real-time to their personal brain activity. In the event that the sensors pick up indicators of stress or anxiety, the app provides meditative training content to focus the user’s attention. It references neuroscientific evidence that mindfulness meditation can positively influence brain growth, that EEG-neurofeedback can optimize cognitive performance and that “brainwave training” can result in neuroplastic changes.

Muse is, in short, a neurotech-based wearable mindfulness monitor and neurofeedback learning app which “motivates you to change your brain.”

Researchers at Kansas State University used the headset in a trial study with more than 400 8th-grade middle school students. The study, which took place over 20 weeks, concluded the headset and app improved the focus and concentration of these students, as measured by office referrals for disciplinary action, through the application of mindfulness-based neurofeedback.

The company behind Muse, Interaxon, said, “the Muse brain-sensing headband uses EEG sensors to detect brain activity in users as they meditate. It then provides real-time feedback via an app, prompting users to re-focus their attention. Over time, repetitive training on re-focusing helps users develop stronger mindfulness and focus as well as better stress control and improved mood.”

In addition to a quantitative reduction in office referrals after using Muse, the researchers claimed students reported a change in qualitative experiences. They noted students used words like “soothing,” “calming” and “relaxing” to describe the experience and indicated they could focus without the headset after the meditative exercises.

With its emphasis on meditative exercises, the Muse study is evidence of how the current movement to promote social-emotional learning in schools is now beginning to encompass neurotechnology innovation. It makes emotions quantifiable as brain-data, and then applies mindfulness training as a pre-emptive disciplinary technique. Muse is an automated pastoral care practitioner tasked with training students’ brains for docility and the correct discipline.

While the Muse study is concerned with docile mindfulness, the US Defense Advanced Research Projects Agency (DARPA) is exploring the use of neurotechnology in military training. In particular, DARPA plans to boost the acquisition of skills and learning through its Targeted Neuroplasticity Training (TNT) program. TNT is developing noninvasive technologies for activating synaptic plasticity — the ability of the brain to connect neurons which is understood to be the neural requirement for learning.

According to the TNT website, “Targeted Neuroplasticity Training (TNT) seeks to advance the pace and effectiveness of a specific kind of learning — cognitive skills training — through the precise activation of peripheral nerves that can in turn promote and strengthen neuronal connections in the brain. TNT will pursue development of a platform technology to enhance learning of a wide range of cognitive skills.”

The striking claim of TNT is that it will “advance capabilities beyond normal levels” — indicating how some neurotechnology applications are intended optimize existing neural capacities for cognition, thinking and acting.

DARPA’s proposed platform will make use of techniques of neurostimulation. Neurostimulation technologies can be used to increase cognition, behavioural performance, strength and motor function. The application of electrical currents to the scalp stimulates neurons to fire more easily and produce a stronger signal without actually causing neurons to activate.

“The TNT program seeks to use peripheral nerve stimulation to speed up learning processes in the brain by boosting release of brain chemicals, such as acetylcholine, dopamine, serotonin, and norepinephrine,” claims the TNT website. “These so-called neuromodulators play a role in regulating synaptic plasticity, the process by which connections between neurons change to improve brain function during learning.”

TNT is ed-neurotech weaponized, a program to sculpt military personnel to operate “beyond normal levels.” Although military in origin, DARPA’s R&D clearly indicates how the scientific and technical possibilities of neurotechnology are being taken up in relation to education, training and learning in ways resonant with the wider aspirations of ed-neurotech. For ed-neurotech advocates, producing “beyond normal” human qualities is a strategic objective.

Organizations that seek to influence government policy have begun to consider the potential and implications of neurotechnology in education. The World Economic Forum, as part of “The Future of Neurotechnologies and Brain Science” program, has begun to promote “brain-wearable technology” and BCI applications for “optimizing education,” notably by “dynamically adjusting learning” according to real-time brain scanning of individual students.

Such developments could open up a new horizon for brain-personalized learning, with educational courses tailored according to brain-data analytics conducted on neuro-adaptive learning platforms. With personalized learning a hot topic of development and debate, neurotech-based adaptive learning might appeal to ed-tech companies looking for a unique pitch, or policymakers seeking a fix for long-term problems.

Unanswered questions remain, though, about the accuracy of brain-sensing technologies in the complex context of the classroom, and how neuro-adaptive platforms might impact on student cognition, emotions and behaviour.

According to bioethicists Marcello Ienca and Roberto Andorno, we are currently in the middle of a “neurotechnology revolution.” In coming decades, they argue, we might expect neurotechnology to “become pervasive and embedded in numerous aspects of our lives and increasingly effective in modulating the neural correlates of our psychology and behaviour,” raising all sorts of questions about neural security, ethics, and human rights.

Emerging examples suggest the first stirrings of an ed-neurotech revolution, but as yet there is little debate about the potential implications for individuals or education more widely.

Although BCIs, wearable EEG, neurofeedback learning apps, neurostimulators and neuro-adaptive learning platforms are by no means yet pervasive and embedded in educational environments, ed-neurotech is now the subject of growing interest and optimistic speculation. Students’ neural data and brainwaves are becoming the source for organizations that wish to manage and optimize students’ cognitive capacities, behavioural performance and emotional discipline.