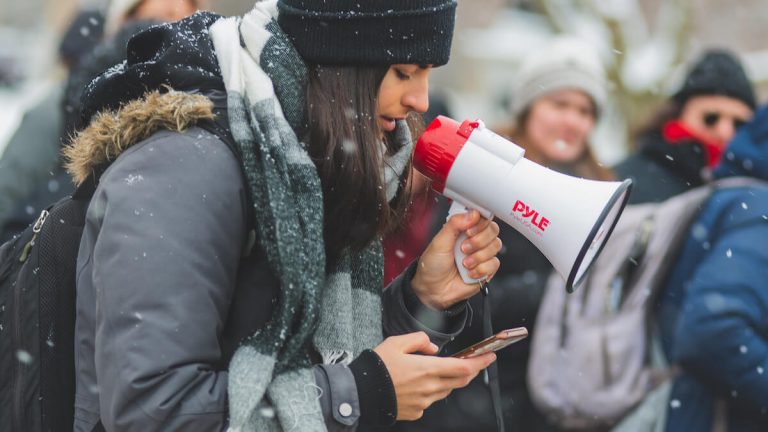 Is creating a TikTok video really an example of civic engagement? How about changing your Facebook profile image in service of a cause? Are young people really as disconnected from their civic spaces as the steady decline in traditional measures of civic engagement might suggest? How do we even begin to wrap our heads around the idea of what “civic engagement” may look like in today’s digital environment?

In our current COVID-19-dominated world, in which traditional in-person acts of civic engagement — from group gatherings to the simple act of voting – are suddenly prohibited or accomplished only at dire risk of one’s health, these questions resonate more strongly than ever. When I and my coauthors at UNICEF’s Office of Global Insight and Policy started to dig into the published literature around this topic last year in order to create our new policy brief, Rapid Analysis: Digital Civic Engagement by Young People, we had no idea that we as a society would soon have to contend with these questions on a scale never before encountered.

Thankfully, there is a large corpus of existing research that can help us think through this current moment with regard to the relationship between the civic, the digital, and (not exclusively) youth. My coauthors and I scoured this research, synthesizing key trends with an aim to present them in a useful and accessible way for policy makers, administrators, and anyone else interested in this topic.

Two of the highlights from this Rapid Analysis that resonated with me the most:

I’d venture to say that most everyone who works in this space has confronted the pessimistic “clicktivist” critique before: “Yeah, but how does any of this matter in the real world?” Rather than romanticize the good old days of on-the-ground civic engagement – which, at least in the current moment, are actually gone – and dismiss digital acts writ large, we found several research-backed analytical frameworks that could be used to both qualitatively and quantitatively evaluate digital civic acts across varying contexts.

Ethan Zuckerman has proposed that we understand digital civic engagement across two overlapping axes: Thick <—> Thin on one axis and Voice <—> Instrumental on the other. Instead of dismissing one’s change of a Facebook profile image as meaningless, it may be more useful to understand it as a “thin” act of “voice.” We know that, especially for youth, acts of voice are profoundly important in and of themselves as identity builders and may also be stepping stones for “thicker,” instrumentalist action down the road.

Likewise, Literat et al. have proposed several axes to evaluate digital civic engagement: Aims, Actors, Contexts, and Intensities. Each of these axes have specific spectra; for example, “Aims” can range from “individual” to “collectivist”; “voice” to “instrumentalist”; “process-focused” to “product-focused.” So, when the queer nightlife industry folks I follow on Instagram, suddenly out of work and physical community due to COVID-19, post daily rundowns of virtual community offerings from yoga classes to drag shows, we might say these are “collectivist” acts of “instrumental” aim to both generate community in a “process-focused” sense as well as generate revenue via donation in a “product-focused” sense. How refreshing to have this vocabulary!

What we want to avoid in thinking through this topic are assumptions that everyone has access; that even if you do have access, it is equal; and to disregard, because of the digital, the specificity of local context and embodied user identity. Research has found something interesting: in social contexts where digital access is commonplace across demographics (usually in wealthy democracies that have an open public sphere where dissent is not penalized), digital civic engagement is more equitable across race and class lines than traditional civic engagement such as voting.

In other contexts, particularly where gender is a dividing line to youth access, digital civic engagement is far from equitable, and in fact may be an extension of inequality. In a stark 2018 report from the Vodafone Foundation and GirlEffect, boys around the world are 1.5 times more likely to own a mobile phone than girls (when bracketing out the US). Furthermore, intense social pressure on girls consolidates onto the mobile phone and mobile internet access, often resulting in outright familial use bans due to concerns about purity and moral panics. At the same time, one study in Indonesia found that young Muslim women in fact turn to online spaces for civic engagement because they may be precluded from participating in the “street politics” of young men. Clearly, local and embodied specificity are paramount when we talk about youth digital civic engagement and must be heeded in any research.

There is a lot more in our Rapid Analysis, including great stories of agentic youth making change in the world as well as a discussion of the need to heed the risks of privacy, surveillance, and disinformation. I hope you find it useful.