Retired Supreme Court Justice Sandra Day O’Connor and her iCivics team recently convened a thought provoking conference, Educating for Democracy in the Digital Age. In partnership with the Aspen Institute, Georgetown Law, and the MacArthur Foundation the conference raised a number of questions regarding the state of civic education. Concerned about the declining state of civic education in American schools, Justice O’Connor assembled a team to create a digital platform, iCivics, for use in formal and informal learning environments. iCivics is a games-based platform and civic curriculum designed to meet students where they are—in the gaming and digital media world. With the rise of mobile devices—iPods, mobile phones, and tablets—casual gaming is a routine part of young people’s media ecology. There is growing optimism that education-based gaming platforms like iCivics represent an ideal way to engage young learners.

During the conference Justice O’Connor expressed concerns about the poor state of civic education today and the implications for our democratic future.  At one point the Justice joked, “when you ask students what is the Declaration of Independence, they do not know the answer…and the answer is in the title of the document!”

Like many other challenges our society will face, educating for democracy will have to grapple with the social and technological transitions that are remaking the very fabric of American life.

Notions of civic literacy, that is, what students should know about the American democratic experiment have evolved as a result of various social, political, cultural, and economic pressures.  David Tyack and Larry Cuban write that throughout much of the early 20th century, educators “tried to transform immigrant newcomers and other ‘outsiders’ into individuals who matched their idealized image of what an ‘American’ should be.”  Historically, civic education targeted toward immigrant, non-English speaking, or racially and ethnically diverse students has been designed to construct loyal, obedient, and patriotic citizens.  In the wake of the 1960s and 1970s, uprisings around racial and sexual equality civic education—especially issues like who and what topics should be included in civic and history textbooks—began to reflect the push for greater inclusion and diversity in our civic imagination.

While teaching students about the structure and distinct functions of our three branches of government is important, the scope of civic education must grapple with the historic shifts remaking our nation’s student body.

Some of the most striking trends documented by the 2010 U.S. census are the profound population transitions happening among young Americans.  Since 2000 Latinos, Asians, and immigrants drove nearly all of the population growth in U.S., according to the census.  In California, roughly half of the age 18 and under population is Latino.  Enrollment data from the Texas Education Agency reports that for the first time ever half of the state’s public school population is Latino.  Two of every three public school children in Texas are non-white. Another stunning census finding: for the first time in America’s history fewer than half of three-year-olds are white.

These and other social transitions illuminate how the nation’s student body is changing and why civic education, in order to remain relevant, must evolve too.  As William Frey of The Brookings Institution notes, “these shifts in the racial and ethnic profiles of our child population…present both opportunities and challenges.”

This is certainly true in education and raises the questions, what should civic education in U.S. schools look like in an age of social and technological change?

Traditional civic education has required students to memorize basic facts about American government, call it the what, who, and when model for civic literacy.

The primary source of information has been textbooks, a source of literacy that has not always been the most accurate or inclusive.  And while books (in various forms) will certainly continue to play a role in civic education emerging digital media platforms will be key in the effort to engage, invigorate, and create an informed citizenry.  The rise of digital media offers a unique opportunity to add a more experiential dimension to civic education.  Digital technologies can, of course, be used to teach kids basic civic facts, but they can also serve as an entry point into “doing” civics.  This happened in a Minneapolis third grade class I visited earlier this year. 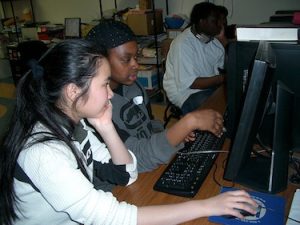 Third Grader: “We have a right to technology in the Classroom.”

During my visit I noticed that a student was using iCivics.  When I asked her what she was doing, it took her a while to respond.  She was too busy playing the game.  In this particular case, iCivics was providing a game-based lesson about the rights of individuals to challenge laws or practices they believed were unfair.  It was an especially appropriate module for the class considering what had happened the previous year.

When I asked the young girl’s teacher, Mr. Sinha*, why he used iCivics to teach his third graders civic education, he told me it was an engaging way to connect kids to the key participatory principles of democracy in a way that was culturally relevant—games—and likely to have impact—experiential learning.  He knew from personal experience that some of his students were weaving some of the lessons they had learned from iCivics about democracy, citizenship, and rights into their lives.

One episode that he shared with me was a powerful example of how civic education through digital media can register real and discernible impact in young people’s learning.

While teaching a unit in social studies about Rights and Responsibilities, Mr. Sinha was struck by a student claim.  “We have a right to technology in the classroom,” said the third grade student.  When Mr. Sinha challenged the student’s expectation to technology in the classroom, he explained that the various tools they used—laptops, Nintendo DS, voice recorders, digital storytelling programs, online games, etc.—were not legally mandated.  In fact, he used his own resources to acquire many of the devices that the students were using in class.  Mr. Sinha saw a teaching moment.  “Realizing that such a right was not in the actual law, and knowing that historically, no rights were ever actually acquired or appreciated until they were lost or acquired through a struggle, I proceeded to remove all of the technology in the room soon after he said that,” the third grade teacher told me.  What ensued was a real life lesson about civics.

The students, Mr. Sinha noted, were absolutely incensed with his decision, and argued that it interfered with their learning and the goal he had set for them to end the year at the fifth grade level.  The next day, one student introduced a petition against Mr. Sinha.  Where did the idea for this kind of civic engagement come from?  Mr. Sinha believes it was based on her knowledge from playing iCivics games and other readings they had done in class.  That evening, the young girl shared her concerns with her parents and with their help crafted a petition to win back the “right” to have technology in the classroom.

The next day in class other students helped to edit the draft before submitting it to Mr. Sinha.  Confident he had made his point, the teacher relented and brought back the tools his students had come to expect as part of their learning.

Since integrating social, mobile, and digital media in the classroom, he had personally witnessed how technology had engaged students and made learning relevant, immersive, and impactful.

Through interactive play, games, and simulation a group of third grade students began to develop a much richer, personal, and communal understanding of civic education and engagement.  Since that experience, the students have posted the petition on the class website to make their case that access to technology in the classroom should be a right for all students.  Local reporters and state officials have visited the class, and now a local debate about technology and learning is gaining a bit of momentum.

And just think; it all started with a group of third graders playing a game that helped them to reimagine what learning and doing civic education could be.

* All names in this piece are pseudonyms