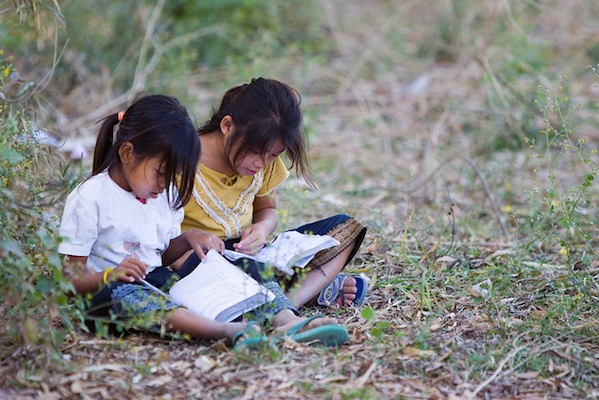 When Frederick J. Kelly invented the Kansas Silent Reading Test, now known as the “multiple-choice test” or the “bubble test,” he was looking for an efficient way to pass students through the U.S. public education system during the teacher shortage of 1914.  With the advent of World War I, men were off to the frontlines in Europe, women were working in war-time factories, and there was a population boom of new immigrants flooding into the schools.  Taking his inspiration from Henry Ford’s assembly line, Kelly came up with a way to standardize learning and assessment for maximum speed and efficiency.  He admitted that “One Best Answer” testing only assessed what was called “lower-order thinking,” but you can’t be picky during a crisis.

Kelly would be appalled to know that a century later his bubble test would be the gold standard for entry into higher education and even into graduate or professional schools.  He himself went on to be a Deweyesque proponent of integrated learning and project-based constructive teaching.  He would have been dismayed to find that scores on bubble tests would be the 21st century’s primary way of ranking global educational excellence.

The mode of assessment we use as our “standard” of intellectual achievement is really about what we count as important and how and why.  The bubble test was modeled on the assembly line and it is the perfect way to inculcate the values of the Industrial Age where the division of labor, the atomizing of different branches and kinds of expertise, and the emphasis on formal credentialing were part of a push to replace older, agrarian and artisanal forms of labor.  Taylorist “scientific labor management” became “scientific learning management,” and standardized tests were the metric of that form of learning.

But our world changed in April 1993 when the Mosaic 1.0 browser was released to the general public.  We need new forms of education.  We need to reform our learning institutions, concepts, and modes of assessment for our age.  Now, anyone with access to the World Wide Web can go far beyond the passive consumer model to contribute content on the Web.  We can customize and remix, alone or in collaboration with others, located anywhere on the Web.  That Do-It-Yourself potential for connected, participatory, improvisational learning requires new skills, what many are calling new “literacies.”

I have a basic literacy to add to the last century’s 3 R’s of “reading, ‘riting, ‘rithmetic.”  Let’s add a 4th R: “algoRithm.” (Yes, I know that’s a fudge, but writing and arithmetic aren’t perfect either.)

The Case for Learning to Code

Let’s start emphasizing our 4th R in kindergarten, even preschool, since, like the other literacies, algorithmic thinking is foundational.  Wikipedia defines “algorithm” as “a set of rules that precisely defines a sequence of operations.”  It is a step-by-step approach to calculation.  You use algorithms to program a computer or for Webcraft.  It is almost the opposite of bubble-thinking.  It provides an alternative to fact-based mastery and proposes, instead, iterative, process-oriented, constructive, innovative thinking.

In the most general sense, algorithms can be child’s play: a five-year-old customizing his Pokemon characters and game is already engaged in algorithmic thinking.  Free, open-source programming languages like Scratch, developed by the MIT Media Lab, allow kids to learn introductory computational skills that lead to interactive animations, narratives, games, music, and art that they can post to the Web.  They develop both design and problem-solving skills, alone or within a world-wide community.  Hackasaurus, developed by Mozilla, allows youth to remix their favorite Web pages, and simultaneously develops “skills, attitudes, and ethics that help youth thrive in a remixable digital world.”  Again, this is almost opposite of the educational values standardized by bubble testing.

What is marvelous about algorithmic thinking and Webmaking is that you can actually see abstract thinking transformed into your own customized multimedia stories on the Web, offered to a community, and therefore contributing to the Web.  Algorithmic thinking is less about “learning code” than “learning to code.”  Code is never finished, it is always in process, something you build on and, in many situations, that you build together with others.   Answers aren’t simply “right” guesses among pre-determined choices, but puzzles to be worked over, improved, and adapted for the next situation, the next iteration.  You look at examples, you try your own, you run the program, you see if it works.  If it doesn’t, you see where you started to go wrong, return to that place, and try something else.  The better you become, the more possibilities open for you.  Your motivation for learning isn’t to score in the 99th percentile on your end-of-grade exam but to have more complex, surprising, or beautiful results that you can work on and share with your friends.  Isn’t that what all learning should be? 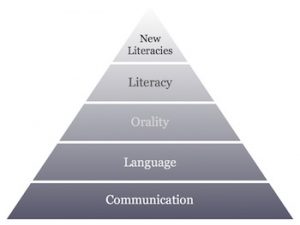 There are other intellectual and social benefits from this 4th R.  The 20th century’s division into “two cultures”—with the human, social and artistic disciplines on one side and the scientific and technological on the other—makes no sense in the world of Webcraft.  In fact, algorithmic thinking is so much about process, invention, and customizing that, in some circles, there is still a healthy debate about whether writing code is an art form, a craft, or engineering.  Is it thinking or doing?  Is it writing or making?  Is it theory or practice?  The answer is “all of the above.”  And that is what makes it such a radical alternative to bubble thinking where knowledge–subject matter, questions, answers—are discreet and disconnected one from the other.

If every elementary school child learned code, it would help them understand that the World Wide Web is vital for everyone because we make it.  And if every child learned to code the way it is expected that they will learn the other R’s, we might have a side benefit of greater diversity in our tech worlds.  I’d love to see Dora the Coder to encourage girls to play at Webcraft—and a Dora who could be of any race, from any culture, from any country, rich or poor.  Our Web is better from full, open, democratized participation—and so is society.

Of course, to actually make this 4th R a reality, we would need to be teaching the 4th R online, in Peer-to-Peer Preschool, perhaps taught by adult learners in online non-profits such as P2PU.  Since you learn best by teaching, why not peer mentors?  And we also have to get into our schools and make a radical transformation happen there.  It would require a vital, energetic Webcraft Teachers Corp, with volunteers in every school, from the least to the most privileged school, from preschool to graduate school.  In primary grades, volunteers could go in perhaps going in a few hours a week to work with the kids.  Imagine if all teachers had three or four hours each week outside the classroom, to work together toward rethinking how to redesign schools for the actual Web-engaged kids they see in their classrooms, not the standardized model current testing norms address.  Algorithmic thinking would be part of the process, as would increasing attention to peer-to-peer co-learning and team learning.

How would we assess the results?  The point is that there is no one standard, no one bubble test, no set of right answers, but, intrinsically, good code is working code so it doesn’t need an extrinsic test.  On the other hand, if we needed national standards, we could adapt badging, the reputation system that the world-wide community of web developers have evolved for crediting not just excellence at Java Script or C++ but communication skills, collaborative skills, the ability to take a project to completion.  Teachers could think together about how such systems could be adapted to schools.  It would take some work building new systems of assessment and no one expects it to happen over night.

It took from 1914, when Kelly designed the first multiple-choice test, until 2002 when No Child Left Behind enacted, anachronistically, a law that made standardized testing into national policy.  We can improve the current system lots faster than that, especially since a cooperative global online community of professional educators and concerned parents could work together to gather ideas about how to reshape educational values in an interactive, algorithmic way.

Utopian, yes, but so is the World Wide Web.  Use it or lose it, build it or someone else will own it.  We need to be training youth who have a passion for contribution and participation, a passion to keep the Web open, and a passion and practice of democratized participation.  That is their 21st century inheritance.  Some day they will be our leaders.  The least we can do is help them have institutions that help them to thrive in their future—not in our past.

That’s the vision.  I look forward to talking more about this on Feb. 1, at a Fireside Chat hosted by the Mozilla Foundation’s Executive Director, Mark Surman.  You can join us at:  “Teaching the Fourth ‘R’:  Webmaking as a 21st Century Skill.”  We all need to be part of the challenge of learning the future together.