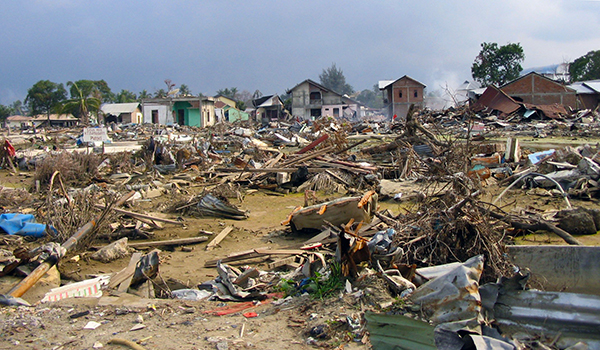 Editor’s note: The following post is a summary of a provocation delivered at the Umeå University HUMlab’s “Genres of Knowledge Production” conference on Dec. 10, 2014. (Watch video, starting at 14:18)

That from which we act and project, the grounds of work, productive and representational. Platforms are usually presumed to be steady, stable, solid platforms, then are taken for granted, the givens of production and performance, the base or basis — infrastructures, some would say — of knowledge production and circulation/distribution, availability and access.

First, platforms are presumed to be flat (though of course they don’t have to be). Thomas L. Friedman’s insistence that the world once again is flat — if not exactly in the pre-copernican sense — is in part an implication of the plat forming world. “Platform” etymologically pertains to flatness — “plat” in Germanic derivative languages meaning flat. So, one could speak of the flatness of form as much as the form of flatness on which claims stand or from which they are projected. While there is much to be said about this, in the interest of time let’s just shorthand it by saying that as platformed worlds shape the stability of our knowledge making in the manner projected here, the worldings of platforming upends this conception. Just as a flat world was an illusion, its service as knowledge and production platform now is a delusion.

That worlds are made and remade through assertion — stating — and contestation-implies that there is no single world, no uniform planetary platform as flatulence presupposes or at least insists. There are worldings — varieties of world-making, as Nelson Goodman put it. The implication of worldings as proliferated makings entails the transforming, moving, surging character of worlds just beneath the surface of their seeming stability. Enduring form gives to a world its sense of stability over time within the boundaries of which small shifts and changes proliferate, transforming at the point those shifts add up to transformative force. Platforms — that flatness of form — is a step or two away from being rendered shaky, if not undone altogether (in what we sometimes come to see as revolutionary change).

Platforms, thus, themselves are built on more or less unstable — moving, shifting — grounds. The ground beneath her feet, as Salman Rushdie once memorably put it about the history of rock ‘n’ roll, is but an event away from an earthquaking shake, a fiery explosion, a tempestuous sea. The story we have told ourselves of the stability of the platform, the securing foundation indeed of the worldly platform, rests on increasingly fragile, vulnerable grounds. The turn to naming and analyzing this sense of vulnerability — the very shakiness of the now not so metaphorical ground beneath our feet — in terms of the Anthropocene gets at these rumblings.

The Anthropocene, it could be said, is to be the “natural social” implication of not just our epistemological but also the ontological antifoundationalism of the past half century. The Anthropocene: collapse of nature-human-anthropological and technological, of subject-object, of agency and passivity, mobility and stasis. We see its effects all about us today in the human making and breaking of environments, and the environmental ACTING — exercising Agency — on us. The Anthropocenic, in short, represents, the “new man,” after all the literal meaning of the term, the emergence of a new anthropos. Instability, thus, has become our default in habitation, our habitus, our being in the world.

The point and its implications are even more obvious in thinking of digital platforms. Their sought after stability and sustainability is the holy grail of the digital moment. But, if anything, the digital has exacerbated worldly instabilities, heightening speed, circulation, flows both in time and intensity so much so that the seeming stabilities of the infrastructural are more or less instantaneously undone.