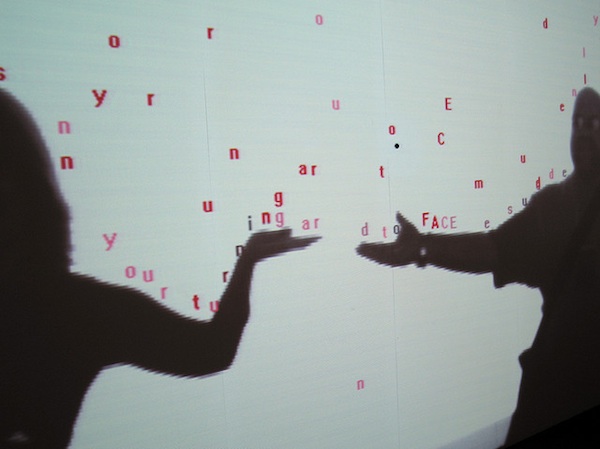 We are all quite familiar with interactive writing. Business writing is a nearly constant stream of emails and memos that reply to and reference other texts. Teachers and students engage in a dialectic of writing, response, and revision, using tools from electronic texts to margin scribbles. The Internet is built on the back of blogs and comment threads and message boards, while everyone from teenagers to the Pope send texts and tweets. If we expand our understanding of writing to include not just words on paper or a screen but also verbal communication practices like leaving voicemail messages and conversation, then most of us spend most of our days crafting interactive communication.

Yet this interaction is, for the most part, cognitively painless. While the business owner may carefully choose her words in the company-wide memo or the student might stare blankly at the screen wondering how he should respond to a teacher’s comment, most of our interactions are effortless. We rarely think about what we will say next in a conversation, or how to respond to that voicemail, or what comment to leave on a blog post. Sure, when it’s possible to revise what we write, we will go back and check our words and occasionally rearrange them, but we rarely agonize over such writing in the way we might, for instance, agonize over a term paper.

Despite the relative ease of interactive communication, however, writing for interaction is much more difficult.

By writing for interaction, I mean writing that is meant to be interactive for a reader, not simply in the sense that reading is an experience created by both writer and reader, but rather that the decisions made by the reader change what is read. That is, reading practices that enable responses from the text. It is one thing to write an email expecting a response and react to that response. It is another to write a book or other text for a broad audience that is designed to react to the reading choices made by individual members of that audience.

Part of the reason this writing is difficult is technological. We do not yet have robust tools for creating interactive reading experiences. Apple’s iBooks platform advertises its “widgets” as “interactive magic,” but few of these widgets do more than reproduce print features in the form of an electronic book. Embedded slideshows, galleries, callouts, and multimedia are only interactive in the same way that turning pages or pushing play on a VCR are interactive: the user controls when they stop and start. The ability to rotate 3D models is great, but, again, is essentially dynamic, like pausing and rewinding a video, rather than interactive. Quizzes, with different questions and real-time reaction to answers are interactive, but few would argue that this behavior represents the true promise of interactive communication. The promise of location-aware books suggests one way in which books can provide more interaction, but they have yet to become widespread.

Another reason writing for interaction is difficult, particularly in the context of eBooks, is that culturally we think of books as being static things, and all the more serious for their solidity. After all, Choose Your Own Adventure books are for children. Because books are supposed to be permanent, it is hard for us to imagine a “book,” even an eBook, that deviates from this norm. Tools like the ability to share highlights and notes on Amazon’s Kindle platform are attempting to add a layer of interactivity to traditional reading, but they have yet to gain wide popularity. At the time of this writing, the most popular highlight in a Kindle book has only been noticed by just under 18,000 readers.

While I wouldn’t argue that we should ignore the value of traditional texts, the growing availability of tools—like location-aware books—make writing for interaction possible, and thus something we would prepare for. I would suggest, following Kellan Sparver, that true writing for interaction will begin to follow the model of complex, story-driven video games, where a player’s actions within the larger narrative determine how the story develops. In my next post, I’ll discuss some implications of this observation and the ways it might affect writing and learning in electronic environments.