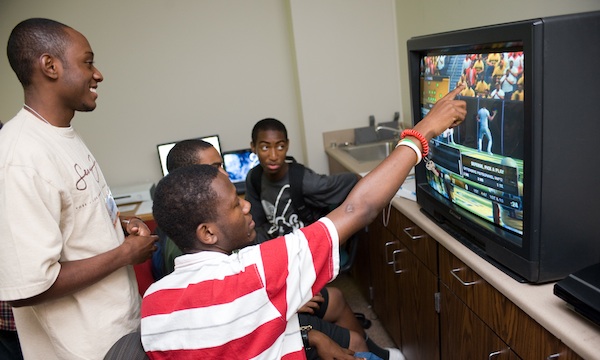 A recent report on educational achievement among young black males describes a “national catastrophe” in primary, secondary, and higher education that is reinforced by policy failures and funding shortfalls. “A Call for Change: The Social and Educational Factors Contributing to the Outcomes of Black Males in Urban Schools” uses data largely from the U.S. Department of Education to paint a grim picture of an achievement gap between black and white students, reinforcing the message of recent books like Pedro Noguera’s The Trouble with Black Boys: Race, Equity, and the Future of Public Education. While the Obama White House has become known for promoting video games as a way to teach science, technology, engineering, math, and as a method to promote healthier eating and exercise among kids with sedentary lifestyles and pop culture habits, often the Presidential message targeted to African-American urban youth emphasizes traditional print culture literacies in reading and writing. Researcher Betsy James DiSalvo from the Georgia Institute of Technology is taking a different approach to the achievement gap. Her work is focused on understanding the role that video games play in urban African-American youth culture.

DiSalvo engages African-American teenage boys with video game design and seeks to provide them intensive college and career counseling that “A Call for Change” argues they might not be getting in school despite a desperate need for intervention. She also takes advantage of the fact that video games can bridge the digital divide in African-American homes, because “game consoles often are the most powerful computational devices and the only Internet-enabled devices in our participants’ homes.”

Unlike other after-school programs with technology labs, DiSalvo’s “Glitch Game Testers” treats students as paid employees rather than charity cases. Participants have part-time jobs during the school year and full-time jobs during the summer that provide economic as well as educational incentives to pursue careers in computer science and other STEM-related fields. The program makes a long-term commitment to mentoring and economic support and tries to tailor services around stated needs. According to DiSalvo, other programs “parachute-in” with a rescue mentality that shows little respect for existing attitudes in African-American communities. 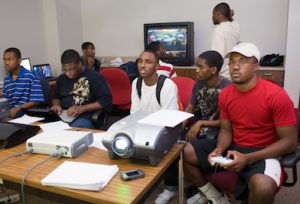 DiSalvo has come up with a pragmatic series of solutions designed around symbiotic relationships between corporate products and consumer populations to foster STEM learning around sports video games that are usually not seen as particularly educational. She recruits Atlanta-area youth attending schools that are 99% African-American and where most students are well below the poverty line as play testers for commercial video game companies to search for bugs in new video games. Local mentors from Georgia Tech and historically black Morehouse College are also part of the Glitch Game Testers team and serve as both coaches and role models.

In her work, DiSalvo finds that video game play practices such as “hacking, cheating, and modding,” which provide powerful informal learning practices among self-described “geeks” destined for careers in technology, are often treated with disdain by African-American teenagers. For many black urban youth, DiSalvo says, their notions of masculinity are defined by codes of idealized sportsmanship and pure physical embodiment, rather than the so-called “hacker ethic” that emphasizes subverting systems and authority.

DiSalvo’s advisor, Professor Amy Bruckman, has been known for her research on gender and computer gaming that stretches back for more than a decade. (Bruckman also wrote seminal essays questioning cyber-utopianism that were written in the nineties, such as “Finding One’s Own in Cyberspace” and “Cyberspace is Not Disneyland“).

In an interview for DML Central, Bruckman praises DiSalvo’s work because it is “specifically targeting African-American teenage boys” in a larger research environment in which the discussion about gender and technology has often been focused on “women and this, and women and that” without enough serious research on masculinity and how “cultural groups have unique challenges.”

By thinking about “games as a motivator” rather than as a means of what The Chronicle of Higher Education has recently called “stealth assessment,” Bruckman argues that researchers can find out a lot more about learning and its relationship to cultural norms and that “looking at masculinity” might provide a fundamental “key to understanding.” 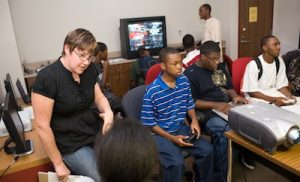 Bruckman also asserts that other researchers interested in how young people make “the transition from interest in games to an interest in computer science” should be thinking more about “theories of the body” and why an ideology that seems to devalue sports and sportsmanship might be repugnant to some groups. The stereotype of “the computer scientist who doesn’t eat and doesn’t sleep and drinks Jolt cola” represents a “denial of the body” that probably seems alien to those young people for whom “the body is first and foremost in identity” and the epitome of success is defined by “owning” people in athletic competition.

Challenging the Narrative on Games and Learning

As Bruckman puts it, “I think that the discourse on games and learning is filled with assumptions that I don’t buy.” For her, “Betsy is using games in a way that makes sense . . . to take the passion that African-American boys have for sports video games to build confidence in creating a learning environment.” According to Bruckman, DiSalvo’s work on play testing emphasizes a “different side of computer science” rather than a campaign to change African-American youth culture in transferring their interest from “entertainment to intellectual discipline.”

More generally, Bruckman warns that many who are devoted to making educational games are part of a larger enterprise that is “ill-motivated and doomed,” because it is based on the simplistic assumption that “if it is fun, then they’ll love it” without asking the most basic of questions: “What is fun?” Bruckman titled one of her essays from the nineties “Can Educational Be Fun?” and it has been a theme in her work since then. “Going to a whole classroom of people and assuming that you will find something that everyone likes” is naïve, Bruckman insists. “You have to think about the culture that people come from first.”