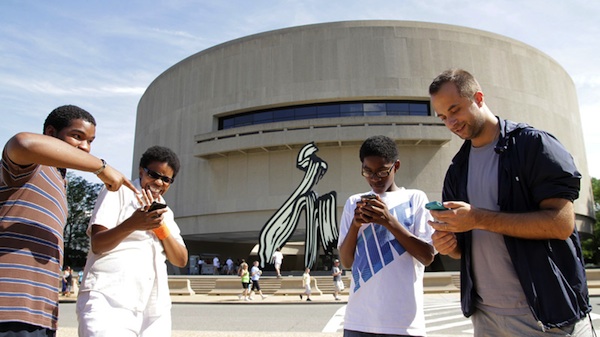 Peals of laughter ring across the room as teens watch other teens maneuver to avoid being hit on the head. There are no bullies here – actually, game designer Kaho Abe is presenting a video clip of a game she created where the goal is to avoid being hit on the head while staying within a designated circle. The game is intended to inspire thought about design constraints, and it appears to be working as students raise their hands to inquire about how difficult it is to stay within a ten-foot diameter, and wonder aloud about how they would design the game differently. Such discussions are typical of those that go on at Click@MOMA – a workshop about digital media and game design for teenagers at the Museum of Modern Art in New York.

During week one, Nunez highlights the basics of game design and its intersection with art. Students are introduced to Piet Mondrian’s Broadway Boogie-Woogie and challenged to relate the painting to game design. Kara Tong, a senior at the Baccalaureate School for Global Education, is able to make the connection, as she sees the grids on Mondrian’s painting forming maze-like patterns that become her inspiration for a board game she creates in her first week. In week two, students go to Central Park, where they play a game using iPads that helps them understand how location-based technology influences game dynamics.

Sixteen-year-old Georgia Troch, a student at Millenium High, is excited for week three because she is collaborating with Kara to create a game incorporating elements from J.K. Rowling’s Harry Potter. Using Atmosphir, a 3-D game making tool, Georgia and Kara create a maze where the goal is to get away from the ultimate villain, Voldemort. (Avid Harry Potter fans will remember the maze from the 4th book in the series, Harry Potter and the Goblet of Fire, that led Harry straight to Voldemort). Sitting a table away, Gabe Issa, a senior at Poly Prep Country Day School, contemplates ways to integrate philosophical concepts into his game. He decides to design a game where the player starts on a split road symbolizing morality and must choose a path leading to heaven or hell.

The complex nature of the students’ games prompts Nunez to introduce GameSalad during week four. Nunez emphasizes that GameSalad, a tool that allows non-programmers to design games and requires some higher-levels skills, like logic and math. These skills come into play in weeks five and six, when students develop and revise their own games, which will be on display at MOMA for two months beginning on Aug. 13. Nunez hopes that the concepts the teens learn during the workshop will allow them to imagine games as creative tools that intersect with a wide range of ideas and social concerns. He poses the questions, “Do games have to be violent?” “Do they have to be pure entertainment?”

Leah Gillam, program manager for Informal Learning at the Institute of Play, shares Nunez’ passion for expanding the parameters of what games can do. Gillam and designers from the Institute of Play also collaborated with ArtLab+, a digital media studio, to organize the ArtLab+ Game Design summer camp, which ran from July 11 through July 14 at the Hirshhorn Museum in Washington D.C. The camp aims to introduce kids to the myriad nuances of the art-making process through the lens of game design. “We wanted to move beyond talking about the art-making process as a one-to-one system and talk about it in ways that incorporate game-design principles as part of a comprehensive art-interpretation system or process.”

Twenty-four students – 13 years old, on average – begin their first day by participating in Capture the Tag, a game designed for Hirshhorn’s Sculpture Garden by the Institute of Play. The game is played with an eye on observing design constraints and leads into the camp’s modding and hacking workshop. The workshop teaches students the techniques of game modification, such as content additions and bug fixes, and then challenges students to modify games. All of this is intended to galvanize students to develop their own games for other youth visiting the Museum.

The ArtLab+ Game Design summer camp culminated in a digital showcase on July 14 during which visitors to the Hirshhorn Museum were invited to play the students’ games.

Guest blogger Razeen Zaman is a volunteer at the Institute of Play who is passionate about using game-based strategies for social development and change.