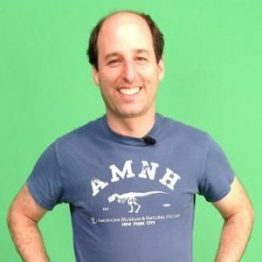 Barry is Associate Director For Digital Learning at the American Museum of Natural History. He has developed innovative programs in the areas of youth-led online dialogues, video games as a form of youth media, the application of social networks for social good, the educational potential of virtual worlds like Second Life, the educational application of mobile phones and alternative assessment models. In his position at the AMNH he works with out-of-school, on site youth programs to explore the intersection of digital media and museum-based learning, with a focus on science and cultural topics. His work can be followed at mooshme.org and on twitter at @mmmooshme.
Before his time at AMNH, he did all sorts of fancy pancy things. He served on the initial steering committee of the MacArthur Foundation’s Digital Media and Learning initiative and his writing appears in the Foundation’s Ecology of Games volume. (In fact, his desk is just down the hall from the room where the Foundation first launched the initiative in October, 2006). He founded and directed for twelve years Global Kids’ Online Leadership Program, when he combined youth development practices with the development of high profile digital media projects that advance 21st Century Skills and New Media Literacies. During his time at Global Kids, Barry also successfully launched Games For Change and the book project Give Me Seltzer.

This summer at the Games For Change Festival, the Game Jam Guide e-book was released, sharing advice from a range of experts on how to lead game jams. One of those experts...

Why Museums Should Dive Into VR

As a young child, I took this photo, of the Franklin Museum’s Giant Heart, my way of expressing my love for this immersive, interactive experience. A few decades later, last month, I...

Disclaimer: The Tate Modern is one of my favorite museums. My previous apartment held a place of honor, above the couch, for a poster I picked up there. And, in 2014, I...

Last year, I was gob-smacked on a trip to D.C. by the temporary WONDER exhibit at the Renwick Gallery (and wrote about it here). Last fall, I was excited to see the...

Does Digital Media Have a Place in Hands-On Science Learning Space?

I reached out to Rebecca Bray, the chief of experience development at the Smithsonian’s National Museum of Natural History in Washington, D.C., to learn about how the museum developed and now runs...

Augmented Reality and Learning in Museums

When I read Camillia Matuk’s The Learning Affordances of Augmented Reality For Museum Exhibits on Human Health, I knew I wanted to speak with her about AR and learning. Camillia is assistant...

Escape Rooms first came to America in 2012-2013 from Asia and Europe, quickly spreading across the country. As defined by Professor Scott Nicholson, “escape rooms are live action team based games where...

This past October, I had the pleasure of presenting in Irvine, California at the new home for the Digital Media and Learning Conference on digital learning at museums. With my colleagues Eve...

How are Digital Learning Educators Made?

Last year, I read Elizabeth Green’s “Building a Better Teacher” and it changed the way I understood education in America. Fundamental to this essential history (of recent efforts at education reform, not...

Augmented Wearables and the Future of Museums: An Update

A year ago, I wrote “Augmented Wearables and the Future of Museums” for DML Central. Back then, most everything was in the conceptual realm. Tools were not yet for sale and most...