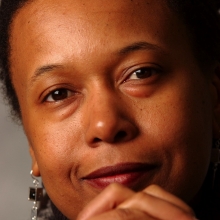 Cathy Cohen is the David and Mary Winton Green Professor of Political Science at the University of Chicago. Cohen is the author of the book The Boundaries of Blackness: AIDS and the Breakdown of Black Politics (University of Chicago Press, 1999) and the co-editor with Kathleen Jones and Joan Tronto of Women Transforming Politics: An Alternative Reader (NYU, 1997). Her work has been published in numerous journals and edited volumes including the American Political Science Review, GLQ, NOMOS, and Social Text. Cohen is also editor with Frederick Harris of a new book series from Oxford Press entitled “Transgressing Boundaries: Studies in Black Politics and Black Communities.” Her general field of specialization is American politics, although her research interests include African-American politics, women and politics, lesbian and gay politics, and social movements. She is Co-Principal Investigator on The Youth Participatory Politics Survey Project.