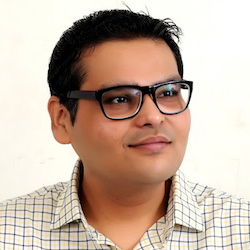 Nishant is the founder and Director of Research for the Bangalore-based Centre for Internet and Society. His doctoral work at the Centre for the Study of Culture and Society, examines the production of a Technosocial Subject at the intersections of law, Internet technologies and everyday cultural practices in India. As an Asia Scholarship Fellow (2008-2009), he also initiated a study that looks at what goes into the making of an IT City in India and China. He is the series editor for a three year collaborative project on “Histories of the Internet(s) in India” that maps nine alternative histories that promote new ways of understanding the technological revolution in the country.

Nishant’s current research engagement since 2009 has been with the possibilities of social transformation and political participation in young peoples’ use of digital technologies in emerging ICT contexts of the Global South. Working with a community of 150 young people and other stakeholders in Asia, Sub-Saharan Africa and Latin America, he has co-edited a 4-volume book titled Digital AlterNatives with a Cause? and an information kit titled D:Coding Digital Natives. Nishant writes regularly for The Indian Express and GQ India to give a public voice to the academic research. He is currently also engaged in a project that seeks to articulate the intersections of digital technologies and social justice within the higher education space in India.

Nishant designs Internet and Society courses for undergraduate and graduate students in the fields of Communication, Media, Development, Art, Cultural Studies, and STS, in and outside of India. He is a founding member of the Inter Asia Cultural Studies Consortium and has also worked as a cyberculture consultant for various spaces like Yahoo!, Comat Technologies, Khoj Studios, and Nokia.

Care and the Teacher’s Role

In my last post, I drew from my classrooms to suggest that the biggest challenges that the emergence of new political structures of hatred and vengeance posit is to our pedagogies. Finding a...

Toward a Pedagogy of Repair and Care

Note: This is the introduction to a four-part mini-series that looks at a growing dissonance between the politics that we espouse in our classes and the realities that our students observe in...

Against the Ampersand: Hyperlink Politics for the Future

The Politics of Reticence: Beyond Number Games

Politics by numbers is a funny game. It allows for large structures like universities to reduce the question of diversity, plurality, dissent, and acceptance into quantified rubrics of access, inclusion, and representation....

From Intersections to Encounters: What the University Can Stand For

#StandWithJNU Politics of Hope is a dreadful thing. The cruel algebra of necessity kicks in, when you are contemplating the possibilities of the future — not possibilities for the future, but of...

From Cross-roads to Intersections: Hashtags for the Future of Learning

Note: This is the first of a four-part series that introduces three hashtags that seek to punctuate and puncture the techno-utopian policies and social perceptions of the forms, formats and functions of...

Editor's note: This blog is the third in a series of four on digital learning (Part 1, Part 2). In our day-to-day work, we come across a vast range of blog entries,...

The Power of Decentralization in the MOOC

Editor’s note: This is the second in a series of four blogs on digital technology (Part 1, Part 3). Nishant Shah’s Annotation: In the last entry, I had suggested that instead of...

The Role of Technology in Digital Learning

Editor’s note: This is the first in a series of four blogs on digital learning (Part 2, Part 3). In their accidental and ironic hit Youtube song, “What does the Fox say?”,...

The Reader in Digital Humanities

The Reader in Paradise Lost DIgital Humanities When Stanley Fish wrote his magnificent treatise on the role of the reader in John Milton’s epic Paradise Lost, he was making an argument that the real fallen...