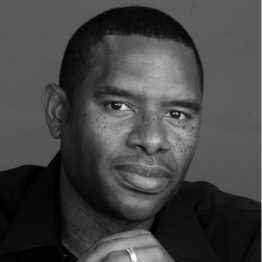 S. Craig Watkins is a Professor and Founding Director of the Institute for Media Innovation in the Moody College of Communication at the University of Texas at Austin and the author of four books, including Don’t Knock the Hustle (2019).

His book, The Young and the Digital: What the Migration to Social Network Sites, Games, and Anytime, Anywhere Media Means for Our Future (Beacon, 2009), is based on survey research, in-depth interviews, and fieldwork with teens, young twenty-somethings, teachers, parents, and technology advocates. The Young and the Digital explores young people’s dynamic engagement with social media, games, mobile phones, and communities like Facebook.

His other books include Hip Hop Matters: Politics, Pop Culture and the Struggle for the Soul of a Movement (Beacon Press, 2005), and Representing: Hip Hop Culture and the Production of Black Cinema (The University of Chicago Press, 1998).

Addressing issues that range from the social impacts of young people’s participation in digital media culture to the educational implications, Craig has engaged a dynamic mix of communities. Among them: the National Institutes of Health and the National Institute of Drug Addiction, IBM Center for Social Software, SXSW Interactive, the National School Boards Association, Smart Mixed-Signal Connectivity, the Austin Forum on Science and Technology for Society, Facebook, iCivics, and the MacArthur Foundation,

Craig served on the conference committee for the 2011 “Designing Learning Futures” conference and was chair of the conference’s Youth, Digital Media, and Empowerment track.

He is a member of the MacArthur Foundation’s research network on Connected Learning. Among other things his work in the network will include leading a team of researchers in an ethnographic study of diverse teens, participatory practices, and social ecologies. Craig is also developing a project that looks at the connection between mobile technologies, youth, and civic engagement. Finally, he is conducting a series of case studies that look at how educators are using social and digital media to redesign learning in schools.

For updates on these and other projects visit his website, theyoungandthedigital.com.

Hustle and Grow – Making a Creative Career in the Digital Economy

Over the last six or seven years the three of us were part of the Connected Learning Research Network finding out how young people in the US and the UK were using...

In a recent trip to Sub-Saharan Africa, Facebook CEO Mark Zuckerberg spent time seeing up close the country’s burgeoning technology and social innovation-driven ecosystem. During his visit to countries like Nigeria and Nairobi, Zuckerberg...

The Spread and Evolution of Learning Labs

For much of its duration, the Digital Media and Learning (DML) initiative has made a serious investment in not only reimagining learning but also remaking the kinds of institutions and places that...

Millennials live in a world of contradictions. They are the most educated generation in U.S. history and yet they earn less than the previous generation of young workers. They live in the richest economy...

Parenting in a World of Social and Technological Transformation

The Spread of Innovation

Tens of thousands from across the U.S. and around the world will settle in Austin this week to join in the big festival known as South by Southwest (SXSW). For two weeks, it's a...

The United States Census Bureau has been tracking computer use since 1984 and the use of the Internet since 1997. Not surprisingly, much has changed over that span of time. Even though...

The fatal shooting of 18-year-old Michael Brown in Ferguson, Mo. began dominating the national headlines instantly. One of the biggest factors, as Newsweek's Elijah Wolfson points out, was the use of social media by...

A few months ago, I met the city of Austin’s Chief Information Officer (CIO) and we soon discovered that we had several mutual interests, especially related to young people, technology, and a...

For nearly four decades, economists have been discussing what is generally referred to as skill-biased technical change. That is, the degree to which technological transformations — computerization and automation — privileges high-skill...