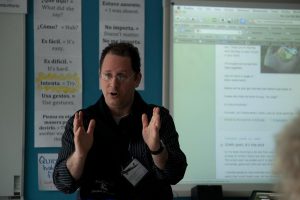 Darren Kuropatwa, director of learning for Hanover School Division in Manitoba, Canada, remembers how he was first drawn the pedagogical potential of the Internet. When he noticed that the professional development day devoted to technology offered by his school in 2004 listed workshops on using email, Excel, and Word: “I felt that we ought to get beyond teaching simple applications to educators, so instead of complaining I approached the organizers and asked if I could do a workshop on harnessing the power of the Internet.”

Kuropatwa admits that he had not been aware of blogging until he started researching for his workshop: “And I was welcomed by a community that, at that time, was small but incredibly warm and open. I learned tons in the first two weeks.” He started blogging with his own class in January 2005, which led him to “people like Alan Levine and Will Richardson,” who connected Kuropatwa with the intensive peer learning that was brewing ten years ago in the then-small community of edu-bloggers. Kuropatwa’s background is teaching high school math, “So I was curious about other math teachers who might be blogging with their classes, and I had trouble finding them. Then one day I read a post on Anne Davis’s blog about a math blog. I found it fascinating – and then I realized that what she described was me and my blog with my students. Seeing how someone half a continent away is reading about what is going on in my little classroom in Winnipeg and sees value in it – instantly, in that moment, it all connected for me. That emotional impact, that experience I was undergoing – that’s what I want my kids to experience.”

That was the beginning of Kuropatwa’s’ “focus on how to orchestrate the learning ecology so that my students can develop this kind of experience, the kind of connections I was making. This change of focus changed the character and culture of the classroom all for the good.” At first, Kuropatwa’s math blog was primarily his voice. Almost all the posts were written by him. He picked up a practice from an English teacher who instituted a “daily scribe” exercise in his classroom – every day a different student summarized and reflected (on paper) on what had gone on in class that day. Kuropatwa assigned his students to answer the question “what did you learn today?” in the form of a blog post. Each student who posted was responsible for choosing another student in the class to continue the thread the next day. 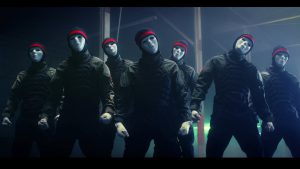 “Daily Scribe blogging turned out to be a profound assignment, although I didn’t realize it at the time. By requiring students to report on their learning every day, they created a challenge to me to ensure that there was something to report on. Because their voices were driving everything, they ended up taking ownership of that online space.” He recalls how the Jabbawockeez, a popular dance troupe, inspired an entire episode: “These guys were amazing dancers. They wore white masks and hoodies, so you couldn’t tell who they were. So on the blog, the students decided not to show faces. One kid got a mask and took a bunch of pictures of himself taking different dance poses, pointing at different aspects of math, as he explained what he learned that day.” The next day, discussion erupted. “The students said that we ought to change the name of the blog from “precalculus 40S” to “JabbaMatheez” so right there in front of them I logged in and changed the title of the blog. For the kids, that was the pivotal moment – they saw that I really meant that it was their space to do with as they wished.”

Kuropatwa’s students started blogging in January 2005. By March 2005, he started a blog to share his thinking with other educators – “A Difference.” As he thought in public about ideas he wanted to in his classroom, which Kuropatwa had started thinking of as a laboratory as well as a class, one of his posts received a comment from an obviously young person. Following the links back, Kuropatwa saw that it was a fifth grade student in Georgia – who, to Kuropatwa’s astonishment, also commented on Kuropatwa’s own grade twelve precalculus student blogs. So Kuropatwa left the student a long reply, encouraging him to continue to explore math.

“So when I come into class the next day, all the kids are asking ‘who’s Eddie?’ I said, ‘let’s follow the links.’ So my students in Winnipeg trace the links back to a fifth grader in Georgia. The next thing I know, my students are commenting on this class blog and Eddie’s friends think he’s a superhero. He’s so excited that his teacher captures a short podcast of Eddie talking to his school principal. He can’t contain himself. You can hear the excitement in his voice. The word spread around the school district in Georgia, which led to an invitation Eddie from the superintendent. Eddie’s encounter with the superintendent was recorded as a podcast and posted on their blog, which I discovered when I got home from work that day. So the next day I had to tell my grade twelve class about what had happened.”

Kuropatwa reminded me that I have often stated that social interactions online can provide the glue for connections that facilitate peer learning. So where is the math in all this? “The math is what came out of it for Eddie and my students who now feel that their online audience is real – and who had to make sure that their twelfth grade mathematics had to be blogged in language clear enough for a ten year old to understand.” 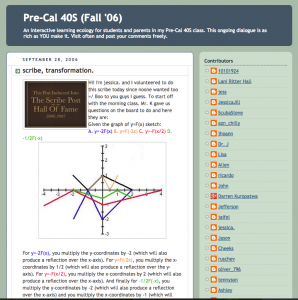 Another student who took Kuropatwa’s math class wrote a “daily scribe” post of some length. Other students responded with comments, pictures, animations videos. But she was struggling in class and eventually dropped it. Unknown to Kuropatwa, BETT, a conference in the UK, showed Kuropatwa’s student’s blog post as an example of high-quality educational blogging in mathematics. It was the student who had dropped the class. She was still in the same school, so Kuropatwa found her and invited her back to class, which she passed the following the semester. “So yeah, these connects that we build with each other online, they can have an impact.”

Kuropatwa was immediately enthusiastic about blogging, but didn’t see utility in Twitter at first, until he told Alan Levine that he wasn’t getting how Twitter’s lightweight banter could apply to learning and education. Levine replied” “Ed tech is not a spectator sport. You don’t learn by watching. You learn by doing.”

Kuropatwa remembers how small the community of education bloggers had been a few years earlier, and by 2007 he was discovering that other educators had made lists of teachers to follow on Twitter. “One of the things that flipped the switch with me with Twitter was when I started using it just to report on what was going on around me – and of course I received immediate responses. We got a smart board in my classroom and I tweeted about working to keep my classroom student-centric and received very good advice from a sixth grade teacher in Australia.”

Another time, a student was working out a problem on the board. Kuropatwas’s desk was at the back of the class. He watched and kept quiet in class, but tweeted about what he was seeing. The student working through the problem in front of the class hit a snag. She asked for advice. Different students chimed in with different ideas. She called up another student to give her a hand. Another student joined them. Eventually four students were at the board, working out the solution with the collaboration of the whole class. All through the process, Kuropatwa tweeted his observations, trying to be objective without commentary. People on Twitter started responding in real time. At the urging of his Twitter network, Kuropatwa turned his tweets into a blog post.

By 2010, Kuropatwa’s students are finding and sharing resources around a class hashtag. One night, the students started using the blog as a chat space through a comment thread. One of them commented that she wished they had a tag board. Darren didn’t know what that was, but he found out, and provided one for his students.

Kuropatwa worked for the Department of Education Manitoba, supporting high school teachers across the province in trying similar things in their classes, as curriculum coordinator at a school division that was starting a digital learning initiative. Now he works for the Hanover School Division as director of learning, responsible for K-12 assessment and instruction, professional growth of teachers and administrators. “Once you have the infrastructure in place so kids can get online, it’s hard to overestimate the amount of professional development that teachers and administrators need. Once you all understand that educators of all stripes need constant support and learning of their own in order to do effective digital learning.”

Social media has its pitfalls and its horror stories, which Kuropatwa interprets to mean that students need guidance because moral decision-making isn’t something they are likely to know when they first get online. “If you think in terms of Kohlberg’s stages of moral development, young people to around twelve or thirteen years old have essentially two moral principles – ‘might makes right’ and ‘if no one sees me do it, it’s okay.’ As they grow morally and ethically, they begin to appreciate that doing the right thing is the right thing to do even when no one’s looking. That’s a rather sophisticated moral stance that comes later. As parents and teachers, we try to help our young people develop a more sophisticated morality and ethics. It’s not just about not doing bad things. We need to talk about how and why to make positive contributions.” Kuropatwa’s next step is to write a book about how and why to go about digital citizenship: “The working title is ‘Persistent Kindness: Teaching Digital Ethics and Citizenship,’ because the fundamental question addressed by the book is ‘how do you as a parent and teacher respond to adversity in a way that opens the door to learning and growth?’”