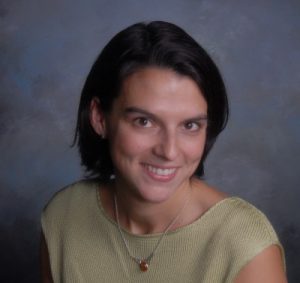 I’m a big fan of DS106, the radically open and learner-centric course that emanates from the University of Mary Washington. Jim Groom and Alan Levine get a lot of credit for it. They are both larger than life personalities, and Groom is the quintessential pedagogical extrovert, but the discerning reader will notice that they are always quick to credit the less publicly known Martha Burtis, Director of The Digital Knowledge Center at UMW within the first couple sentences of any interview about the pioneering course. I had the pleasure of workshopping with Burtis a couple years ago, when we first started planning what turned out to be the Connected Courses MOOC, and I heartily concur – here is an educational technologist who really knows both the pedagogical and technical sides of connected, open learning.

Burtis was a student when it was Mary Washington College in the early 1990s, graduating in 1996 with an English degree. An early modern literature class introduced her to the web, which charmed her, but at that time there weren’t other opportunities to learn much online – the web as a communication platform rather than a publishing medium was just getting off the ground. She got a job as a program assistant at the Folger Shakespeare Library in Washington, D.C. Although English literature was her first love, Burtis was faced with the tough job market for graduate students in the mid to late 1990s. At the same time, she started doing more and more with technology at the Folger, building the website for her division and building websites that grew out of the NEH summer institutes that Folger ran – and she started getting more and more interested in the use of technology in education.

“I remember when I was in graduate school, the web seemed like this place of infinite possibility and there were so many ideas about how we could collaborate and the kinds of network spaces that we could build. But this was way before Web 2.0. At the beginning, the Web didn’t work well because everybody was on dial up connections. Browsers really hadn’t caught up with handling the kinds of extensions to their capabilities that would enable online communication and not just publishing. But it was this wonderful idea that we just weren’t quite ready to realize yet. And so sometimes I feel like I studied this at this moment when the ideas were all there bubbling. But it took another three, four years before we were able to realize those in really meaningful ways. The same thing happened when I was working as an Instructional Technologist for the first time at Mary Washington. Lots of creative ideas but not a whole lot of political will of the University to make them happen by faculty, curricular context. So it was a fine job but it wasn’t necessarily a life-changing job, but it took me down this path a little further.”

Burtis moved to Montana while her husband was getting his graduate degree. She worked as Director of Web Development at the University of Montana: “While it wasn’t instructional technology, I learned a lot about how universities work and are funded, so that was an education in itself.” When her husband finished his degree, she returned to what had become the University of Mary Washington. Gardner Campbell was now the Associate Vice President for the division. He had mentored Burtis when she was an undergraduate. “Coming back here to work that second time clarified my career for me. It was an opportunity to work with people at a very critical moment in the field around a very particular philosophy and ethos having to do with empowering students to use online spaces in ways that went beyond what the course management system enabled. The CMS approach was built around ways to distribute content, but we were more interested in ways to build and make things, connect with people, and understand the Web as a space we inhabit.”

A year after Burtis returned to UMW, Jim Groom was hired. Campbell left for the University of Richmond two years after Burtis was hired, and she was made acting director of the Division of Teaching and Learning Technologies. After holding that position for two years, Burtis had her second child and went part time, working on special projects for DTLT for five years. During that period, she became more involved with development on MWU blogs and “really dug into WordPress and custom development.” She project-managed and ran DTLT’s annual conference – the “faculty academy” – eventually becoming the project manager for DTLT’s online learning initiative. Along the way, she was instrumental in the development of DS106 and “A Domain of One’s Own.”

In the Fall of 2014, funding came through to create the Digital Knowledge Center, which Burtis directs, and which she has worked to make happen – a student support center for digital projects and assignments. “I manage that center, hire and train tutors to help students. It’s been my favorite job so far – a wonderful combination of administration, programming, tutoring, teaching, and mentoring that plays to my strengths and passions.”

“It would be impossible to overemphasize how critical to my career path has been the idea of being part of a networked community. I’m not somebody who collects a lot of friends. I’m in introvert. I’m confident and believe in my abilities, but I don’t like to be front and center. Spaces like Twitter have allowed me to define for myself the kind of network I need to feel connected but also to preserve the parts of who I am that need solitary time. Coming back to Mary Washington reconnected me with a community of thinkers within my own institution that was very aware that we are part of a larger community and that we need to reach out and find those people.”

Burtis credits the philosophy of open source software, even before her involvement with the Web, as an inspiration: “When I thought through the values of open source and what they might mean within the context of education, I remember that was the most inspired I ever was in graduate school. I felt that I had found a project I could think about for the rest of my life. If I had to pin down what that means, I think it’s that my best ideas, my best work, happens in conversation with others. Taking an idea and shaping it with others face-to-face or virtually into something that is reflective of me and is also reflective of this community is incredibly satisfying. And I mean not just getting satisfaction out of my work, but satisfying in the sense that this is what it means to be human. I remember thinking that about open source when we were grappling with it in my graduate class and I remember being excited to realize that this collaborative work wasn’t about people coming up with ideas in isolation, but about people building things collectively and working together to deal with difficult challenges. Even though the process is messy and complex and difficult at times, what comes out of it is so much greater than the sum of the parts.”

DS106 is a perfect example of the “messy and complex” process that inspires Burtis. When she was asked to teach DS106 as an adjunct at Mary Washington, she had never taught before – hadn’t even entertained the thought. At the same time, she was helping faculty teach sessions, sit in on classes, advise faculty. When a teacher was needed for an additional section, she was “completely terrified.” A month before the semester was supposed to start, Jim Groom said to Burtis, “I feel like what we should do instead of just teaching our classes the way we always have is to open this up to the whole world and let anybody take it.” According to Burtis (ironically): “That sounds like a great first time teaching experience – not scary at all.” But she went along, and they did it. They were all buoyed by the reception that DS106 received from people all over the world.

“For me, a person who has trouble imagining myself as the single creator or owner of ideas, that experience of opening our course to the world was exactly what I needed. I needed to not feel like I was alone and to feel part of something bigger. I understood that there is strength in asking for help and saying ‘this isn’t what I can do well, but I know you’re good at it. Can you help me with this and then in return when we get to the part that is my strength, I can help you with that?’ I feel that this is what education should be and I’m amazed that this isn’t how we always do it because it seems like a model of learning and education we should all be talking about – again going back to the open source model of openness, sharing, and collaboration.”

In particular, Burtis was instrumental in creating one of the most famous innovations to come out of DS106, the “assignment bank.” Groom and Burtis started talking about imagining assignments more broadly than a set number of tasks. “What if we allowed other people to suggest assignments and riff off each other? What would that look like and how would we do it technically.” Burtis developed the first version of the application that allowed the students themselves to propose, complete, and rate their own assignments.” Alan Levine subsequently built out the assignment bank in a number of ways.