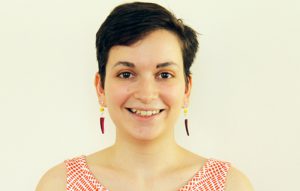 Sofya Zeylikman is both a connected student and a connected educator, a senior studying furniture design at Rhode Island School of Design while leading workshops with kids “teaching them about the intersection between STEM (Science, Technology, Engineering and Math) and STEAM (STEM with Art).” At the Brandeis design lab and high school program, Zeylikman has modified the IDEO version of “design thinking” (empathy, brainstorming, prototyping and making) to a version she sees as “even more holistic,” with a wide angle look at design as problem-solving.

“The way an engineer, a scientist, a designer looks at a problem — these are all just different lenses with which to view objects or problems. Because designers, especially furniture designers, also design systems that people use, it’s not just about physical objects, but includes thinking about humans. Maybe the biggest difference in my approach is a focus on how people interact with each other and how the built environment affects human interactions in different ways,” Zeylikman says.

In that way, Zeylikman and her students approach everything they make as experiments in ways people interact: “Through the design process, whether it’s measurement and ergonomic studies or the IDEO focus on empathy and interviews, I feel that I’m doing the same things scientists do when they receive data from whatever they are observing and then have to make inferences about that data.”

Zeylikman taught fourth and fifth grade students at the Jewish Community Day School of Rhode Island and Long Island how to use circuit stickers to complete a simple circuit and at the same time taught them about lighting design. The first step was getting the LED to light up and explaining how that works. “The second part of the workshop was to create a lamp. I gave them a set of constraints and a set of questions to think about: ‘Who’s using the lamp?’ ‘What color light do you want?’ ‘Do you want a warm light or a cool light?’ ‘What is it going to look like?’ ‘How does it fit into the environment?’ ”

At the same time, Zeylikman posed questions about the technology and the science behind it: “How does this light work?” “Where do we get light?” “How does it bounce off objects?”

“We went back and forth between the science of electricity and light, the technology of getting a physical light to work. and the real world application of what to do as a designer. Not only do the students learn how to put together a lamp and wire it, which is a lot of fun, they also think: ‘Where does it go?’ ‘Who is using it?’ ‘What do I want the light to do?’ ‘What do I want to express?’ ”

Zeylikman put all of the how-to instructions together with the constraints and both technology and design questions into a pamphlet, gave the students supplies, and let them have at it.

“I got some amazing ones,” she says. “One was a kind of campfire. Another was a light for someone’s hamster, so the student designer used one of the red LED lights as the heating lamp to warm up the hamster. She made a foil enclosure for it. And that was all in an hour and a half with all this information coming at them. I loved seeing how they took those concepts and ran with them.”

The headmaster of JCDS was excited by the lighting and circuit sticker workshop Zeylikman had conducted, so he invited her to design something for third graders to present at Rhode Island’s first Mini Maker Faire. She redid her pamphlet on “How does electricity work” for third graders — showing them where they could color illustrations that showed electricity as a flowing current. At the same time, they learned how to put copper tape, batteries, and LEDs on paper to make a working light. Then, Zeylikman decided to show the third graders programming with Arduino. The students designed a sign, drew it out, then thought aloud with the teacher and each other about how the copper tape and lights would work on the sign.

Zeylikman showed the learners how she downloaded an Arduino sketch and showed them the numbers that controlled how fast the lights, attached to the Arduino, would blink. “So they shouted out numbers, I entered the numbers into the sketch, and uploaded different versions” as the students watched the lights blink at different rates with different numbers inserted in the sketch. “We talked about what this means when we change the number and upload the program again. If the number increases, does that make the blinking faster or slower? Then, they chose the speed they wanted the lights on their sign to blink and uploaded it.” The Providence Jewish Day School students made a video of their presentation.

The person in charge of high school programs at Brandeis University was looking for a coach for their DesignLab Teen Fellowship Program. They followed IDEO’s version of design making, tracing specific steps of empathy, brainstorming, and prototyping, but they needed someone who knew how to take the process to the next step of making.

Zeylikman works with 15- to 18-year-old high schools students to make playground furniture for an early childhood center. “We’ve been interviewing the teachers, the parents, and the kids who use the playground. We’ve surveyed the space, took measurements, brainstormed about ideas, following something similar to the Reggio Emilia way of learning, “which is really based in nature and again goes back to my interest in practicing the arts and sciences in concert.

“Many of these high school students have minimal to no background in building. I’m helping teach not only the steps of design, like being clear about the problem that you’re trying to solve and having a sentence or phrase to always go back to in terms of what your constraints are. Without that agreement on constraints, this playground could be a million and one objects and still miss what was most important to us. So, we continued to ask, ‘What do we want to get out of the experience?’ and ‘What did that feedback tell us?’ So much of the first couple meetings were just really thinking about what it means to make these objects in that space.”

More recently, the DesignLab teens have been delving into the making part of the process, starting with protoyping in cardboard — “really simple materials, focused on going from an idea to drawing that idea to thinking about scale and size and proportion with physical materials. They also had to pitch their ideas to the commissioning institution, putting together a presentation that answered questions like: ‘What’s a mood board?’ ‘What kind of information do you need to give to people in order to make your ideas clear?’

“The previous class session, we thought about materials — how much do we need, budget. In the next session, I’m going to teach them about building joinery — starting with what is wood, how does wood work, how do you put wood together, why you can’t glue end grain. So, they have a better understanding of the material they’re working with, not just instructions on how to put it together. I want them to know how to build the furniture and, at the same time, to understand the structure of wood and how it fits our purposes and constraints.”

Zeylikman is beginning to publish lesson plans for other teachers who are inspired by her work. I was intrigued by “How to build a house: A lesson in 3d construction using 2D components for pre-K-K.” At the Jewish Day School, before she started teaching her paper circuitry workshops, Zeylikman took a class about being a teacher as artist in the school, teaching Kindergarten through fifth grade. The students were working on paper collages, which inspired Zeylikman to work out a lesson plan that Kindergartners could understand, based on the methods she used as a furniture designer — making working drawings that captured a three-dimensional object in two-dimensional top-front-side views. The challenge was to simplify the process, so she started cutting out simple shapes and laying them out so that they look like a house when they are taped down. Again, there were prompts: “How many windows?” “What kind of rooms do you need?” “What would your dream house be like?” “What do you do in all these places?”

Zeylikman recalls that the catalyst for her path as student and teacher was a free class she took at the Museum of Modern Art the summer before her senior year of high school. She had always been interested in art, but she thought she would go into engineering or something science related.

“I met some amazing educators through that MOMA workshop, which was about skateboarding,” she recalls. “I was given a blank skateboard on the first day, and there was a series of workshops about skateboard culture in relation to branding and logos and techniques for transferring images. At the end of the program, I cut up the skateboard to make a sculpture. I began to understand that although I didn’t think of myself as talented at drawing or painting, I can think really well through my hands and I can think well about three dimensional objects — which I had not known before.”

One of the instructors ended up becoming a mentor and pushed Zeylikman to apply to art schools, which she had not previously considered. “To my surprise, I ended up at RISD, the most artsy college I could have imagined.”

Her experience with that life-changing workshop encouraged Zeylikman to start experimenting with the workshops she has been conducting with both very young students and with high-schoolers. At the same time, she continues to perfect her craft of furniture-making. Having learned how a single experience or a single mentor can help point out a previously unconsidered path, she sees her teaching as a natural extension of her own experience as a learner.