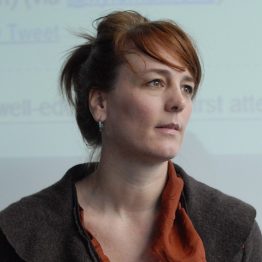 Katie is a game designer, Professor of Design and Technology, and Director of the Center for Transformative Media at Parsons the New School for Design. She is also the Executive Director of a non-profit called the Institute of Play that is focused on games and learning, as well as the founder and Executive Director of Design of Quest to Learn, a new 6-12th grade public school in New York City. The school uses a game-based learning model and supports students within an inquiry-based curriculum with questing to learn at its core. Katie is co-author of Rules of Play, a textbook on game design, The Game Design Reader, and editor of The Ecology of Games: Connecting Youth, Games, and Learning, all from MIT Press. She was an early advocate of the then-hidden world of machinima and continues to be interested in connections between game design and transformative modes of play.

She holds research grants from the Gates foundation, the MacArthur Foundation, the Robert Wood Johnson Foundation and Intel, and has been collaborating with David Birchfield and Mina Glenberg-Johnson from Arizona State University on a project focused on embodied play in mixed reality environments. Her non-profit runs an after-school program focused on immersing middle school youth in game design, technology, and global collaborations via physical and mobile computing expertise, and once co-designed a karaoke ice cream truck driven by a squirrel. Katie was lead designer on Gamestar Mechanic with Greg Trefry, and has been involved in the design of slow games, online games, mobile games, and big games in both the commercial and independent games sectors.

Crafting the Metagame: Connected Learning in the Starcraft II Community

We are researchers of youth digital media practices who have worked together for over a decade to support youth in fostering positive forms of technology engagement. More recently, we have reconnected around...

When experts from around the country came together at the World Economic Forum last February for Raising Good Gamers, a workshop focused on exploring the myriad forces shaping the culture and climate...

Professor Katie Salen is Chair of the Digital Media & Learning Conference 2011. Her work at the innovative Quest to Learn school in New York City has been featured most recently in...