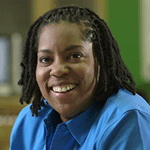 Nichole Pinkard is an associate professor in the College of Computing and Digital Media at DePaul University. She is the founder of Digital Youth Network and co-founder of YOUmedia, both of which focus on developing digital literacies as tools for extending traditional literacies. She has led efforts to implement 1:1 computing in urban schools, integrate digital media into core instruction, and create digital media learning opportunities outside of the formal school day.

Pinkard believes that digitally literate kids – those who can critically consume and produce alternative media – grow up to be better citizens. She holds a B.S. in computer science from Stanford University, and an M.S. in computer science and a Ph.D. in learning sciences from Northwestern University. She is the recipient of a 2010 Common Sense Media Award for Outstanding Commitment to Creativity and Youth, the Jan Hawkins Award for Early Career Contributions to Humanistic Research and Scholarship in Learning Technologies, and an NSF Early CAREER Fellowship. She also serves on the Boards of Institute of Play and Chicago Allies.

Safe Space and Shared Interests: YOUmedia Chicago as a Laboratory for Connected Learning