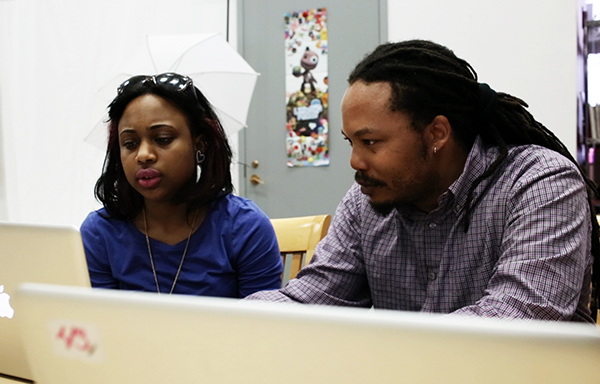 Before stepping foot inside YOUmedia, an innovative, 5,500-square-foot multimedia youth learning space at the Chicago Public Library, “Brother” Mike Hawkins never took any particular interest in slam poetry, nor did he consider himself a slam poet. That all changed when he began forming relationships with the program’s teens in 2009.

“They opened me up to this whole new world of slam poetry where youth could freely express themselves. We went from offering a simple poetry workshop to seeing how we could utilize the physical space so it had more of a community-effect,” Brother Mike said. “We developed this whole new group of poets, artists, and DJs that never would have come together had it not been for that one unifying event.”That one unifying event turned into many, and after a short while, Brother Mike realized that the process of learning, when cultivated in its most natural state — the peer-mentor relationship –- could not flourish in a one-dimensional setting. It was then that Brother Mike decided to join those he mentors on their paths to self-discovery. Brother Mike is the creator of such projects as Change Society, which combines media creation and civic engagement, and Lyricist Loft, an open mic night that provides a pathway for students to showcase their work to a public audience. Whether he’s kick-starting a conversation about poetry or supporting students as they unearth new passions, Brother Mike’s efforts aren’t possible without those initial connections.

“I really try to find a central link between the student and myself. It can be as simple as having the same interest, say music or even fashion. A student might even turn me onto something new,” Brother Mike said. “He actually acts as a teacher as well. It’s all about the back-and-forth learning that takes place through this informal setting. On top of that, there’s the online component, which ties it all together.”

Brother Mike notes that YOUmedia’s social media platform has made a significant impact on the way teens learn in the 21st century. Even today, the social interactions that take place amongst Chicago teens are very much segregated. As he puts it, “the kids from the north side don’t hang with the kids from the south side.” The online networks act as a vehicle for breaking down those lines of separation for both mentors and youth. The open networks provide youth with a place where they can iterate their work and get better at what they’re passionate about. It’s also a space where they can receive instant feedback and support.

“Whatever workshop we have going on for a project in the physical space, there is a reflection of that in the social network. This allows kids to stay together, but as they work on projects, they are given that peer-to-peer support as well as mentor-to-peer support. Whether the teens are working in the physical space or online, everything is accessible at all times. Learning can happen anywhere and at any time.”

According to Brother Mike, designing a specialized learning environment in which youth are given access to both skilled mentors and media creation tools opens ups opportunities for innate interest exploration. A vital piece to the mentor-peer puzzle is making sure youth are put in contact with well-trained adults who not only possess cultural capital but can also provide examples of their own work to serve as models.

“That’s where I come in as a mentor. A student can meet and collaborate with an expert in a field and see that they can really learn from someone who is actively involved in that profession. Often when kids say they want to be in media or they watch television, they don’t witness the trajectory of how that person got to their career. They just get to see the end product,” Brother Mike said. “Here, the teens get to interact with people who have gone through a trajectory and the mentors can reach back and say, this is how I got there, but also, these are some career opportunities that you may never have known even existed.”

Mentors are trained to open up that world to students. A teen can enter the program thinking he wants to be a rapper, but through his course he might find out that what he really finds most appealing is the recording aspect or the business side. Teens often come into YOUmedia with just one interest, and Brother Mike uses his own life experiences as a means to help students link their work to outside institutions. He encourages students to further develop their passions by outlining learning opportunities that extend to their school, home, and community settings as well.

“We care about them and where they go in their lives. That’s a relationship that’s more than just placing technology in front of the student. It’s showing them what more they can do with it. “

Brother Mike encourages teens to be active producers of media, which helps them become strong collaborators and promotes skills and dispositions for lifelong learning. The ability for teens to connect over shared ideas is a key ingredient to that process. On any given day, Brother Mike might work with three to five students who all share the same passion for video production, but each student’s overall purpose for creating video might be very different. One video might be very abstract or creative, another intended to heighten social awareness.

“My hope is that they can use the art they create to make some real-life changes in their world -– whether it’s politically or socially — if what they’ve created can lead them on a path to deeper engagement, I think that is the most rewarding piece for me,” Brother Mike said. “We want them to break down media as consumers so they can act critically. Once they see through that lens, they become productive as critical consumers.”

Brother Mike recognizes that by finding a common thread between in- and out-of school learning programs and the home, youth can take control of their own learning and make meaningful contributions to today’s world. Reimagining education for the 21st century has been the subject of debate amongst stakeholders for quite some time, but Brother Mike points out that as a nation, we cannot even begin to tackle education reform without first having full cooperation from all participating sectors.

“The way I see it, I can’t do my work as a mentor without the great work that the parents put into it. I can’t do my work without the teachers laying that groundwork in the schools. I’m just building on top of that. I think if we are all intentional about how we build together, we can build and support a better and more engaged population of youth who see us all working together for their greater good, and ultimately… for all of our own good as well. “