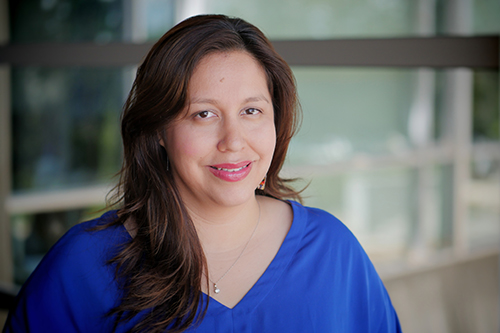 The late Doug Engelbart, who invented most of the elements of personal, connected computing as we now know them – the mouse, hypertext, on-screen editing, multimedia, networked knowledge work, and much more – was ultimately concerned with improving the capacity of organizations to learn to improve, and thus “raising the collective IQ of organizations.” He would have been proud of the work of Eva Mejia, whose work with others on Network Improvement Communities at Carnegie Foundation bring Engelbart’s ideas to the world of education.

Connected educator Eva Mejia started out as a social worker: “As an immigrant to this country, without a lot of resources growing up, then studying at Stanford as an undergraduate, I felt a moral imperative to do something for those like me who were coming after me. So my first job was very hands-on social work with families and students. I saw limitations in what I could do, so my next step was to work as a consultant, helping teams of teachers improve in their organizations” by convening focus groups and other ways of getting closer to the students. Mejia employed “what I know now as the language of human centered design – aiming at shaping their programming and student services according to what their students needed.”

In the third year of a practice-based doctorate program at Harvard, Mejia’s advisors suggested the Carnegie Foundation and Tony Bryk’s work for her residency component. Bryk provided the connection to Engelbart’s work on network-based improvement. “This seemed like the next step up from helping social workers be better at their job of helping teens. I saw this next step in terms of ‘How the heck do we do this kind of improvement as a network of people across organizations. So that’s what I do now.”

Bryk and others had been working on Network Improvement Communities – straight out of Engelbart’s canon. “The idea is that you bring the best concepts from improvement science that have been tested in both industry and health care, then take more recent emerging knowledge around networks and you combine them to improve education, aiming it at important problems of practice in education.”

The first two projects that the Foundation worked on were Community College Pass Rates in Developmental Math, which Mejia notes is “a really big gatekeeper for community college students.” The other program was Retention of Early Career Teachers. “My role is to help organizations outside the Carnegie Foundation bring that model to life, which is fun and challenging and definitely keeps me on my toes.”

When Dr Mejia used the term “Network Improvement Communities,” I asked about the Engelbart connection: “Given our goals of improving education for students and teachers, Tony Bryk and his colleagues said “Every other industry would look to their research and development enterprise, and education has a pretty inefficient one. They were very much inspired by Engelbart’s Network Improvement Communities as ways to mobilize both the technological and human systems.”

Although Engelbart is remembered for his team’s technological innovations, he always insisted that technological improvement must be done in tandem with improvements in the human side – what he called “Humans, using Language, Artifacts, Methodology, and Training.” Dr Mejia’s work has concentrated on the human side: “Where some of my colleagues focus on the improvement side of the work, I focus more on the human connections of the human system and getting people to learn from each other. I also work on how do improvements and knowledge we gain move through networks so that not every teacher has to innovate on their own.” 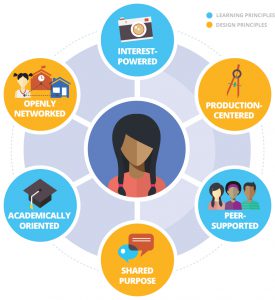 “The improvement communities are a lot more intentional and planned than we sometimes think when we think of communities. Ours have tighter bounds – the folks that sign up to be part of these networks agree to a common aim.” Connected learning principles would call this “shared purpose.” For example, people would agree on an objective of increasing the pass rate in certain math courses by a certain percentage. The community college pathways network has grown the most, now with over 40 colleges participating. Now that the early adopters are showing some success, Dr. Mejia thinks it’s time for others to see that this approach is getting better results than traditional methods.

The project is now launching a network of networks, connecting six existing networks that Carnegie has helped foster. A mixture of face-to-face and online communications is involved in starting and growing networks. “There are usually a couple of months of local meetings, testing improvements in local contexts, then there are weekly or bi-weekly webinars. If there are subgroups, we foster interplay between whole network webinars and smaller group webinars. We play with newsletters and discussion boards. We’re still figuring out what works best in a context of very busy educators who don’t have a lot of time. These are folks who are in front of kids and doing important work, so we try to be mindful about what we ask them to do.”