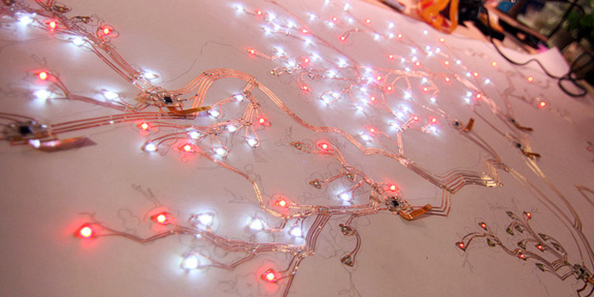 I first heard about Jie Qi, a recent Ph.d. from the MIT Media Lab, when she launched “circuit stickers” while she was still a graduate student. Conductive stickers and ultra-thin components made it possible to create paper notebooks with electronic functions, combining drawing, writing, electronics, and programming — words that light up when you touch them, for example. Her fundamental philosophy is “arts and crafts are really fun and accessible to a broad, diverse audience. And, technology is really fun but not as accessible to a broad, diverse audience. So, I’m trying to use arts and crafts techniques and tools that a lot of people already know and love as a way to introduce electronics and programming, which is really magical but can be intimidating.”

Dr. Qi discovered that adding coding and circuitry can make artwork and craftwork come to life. “And, I think it also helps a lot of folks, me included, to find how they can use technology to create art themselves, rather than depending on other, more expert folks.” With that high-level goal in mind, Dr. Qi started making toolkits, writing tutorials, teaching workshops, creating resources for educators so they can share these ideas and apply them in their own learning settings.

“When I was younger, I really liked arts and crafts. I liked Origami. I loved paper. I still do. I’m a big paper nerd. But, by the time I started college, I was pre-med, I wanted to be a hand surgeon, because I thought that they do really specific things with their hands, and they help people. And, hands were so important to me. I hoped that maybe I could help people have hands again. And, I actually worked in a tissue engineering lab first couple of years of college. But in doing so, I realized that I wanted to do something more creative, to get more involved making things. So, I ended up changing my major to mechanical engineering because those kids get access to the machine shop. And, I also started interning with an artist and fell in love with art and making and creating all over again. One of the artists I worked with is this wonderful woman named Ayah Bdeir. She was working on ways to easily make art with technology, ending up with “littleBits” — color-coded, magnetic, electronic building blocks that make it easy to play with circuits.”

Qi interned with Bdeir, which started her on the path of making art with electronics. Bdeir introduced Qi to her first advisor, Leah Buechley, who created the Lilypad Arduino — an inexpensive microcontroller for e-textiles that can be sewn into fabric and connected with power supplies, sensors, and actuators such as lights with conductive thread.

“Leah introduced me to the idea of using scrap materials. She worked a lot with fabrics at first and then was starting to get into paper and paints. And, then as soon as she introduced me to using paper with technology, I latched on to the idea, and that set me on the path. After I joined Buechley’s group as an intern, I made this pop-up book with all these sensors and lights in it. That was the first time I started combining paper craft and technology. And, that quickly grew into a labor of love. It was also the first time that I really enjoyed programming, starting with Arduino. Back in high school, I took a programming class and totally bombed it and thought that programming wasn’t for me.”

Qi’s graduate research furthered her inquiry into the possibility that if programming and electronics could open new possibilities for arts and crafts, then arts and crafts could also open new possibilities for engineering school: “I believed that my peers at engineering school — and others — could get excited by playful art experiences. I figured that if I could grow to love the technical side that I initially was not attracted to, then others would, too. So I branched out from creating my own artwork because I wanted to share what was, to me, an amazing experience. I started teaching workshops and creating tools for others.”

At first, Qi used only components she could find off the shelf because those would be accessible to everyone. Then, she met her collaborator and cofounder, Bunnie Huang, who showed her how to manufacture custom tools specifically designed for making electronics with paper. “The whole entrepreneurial side of the enterprise — co-founding a company, manufacturing and selling toolkits — was not what I was expecting. It was a recent twist in my adventure.”

Andrew “Bunnie” Huang was a visiting researcher at the Media Lab, where Qi was studying. He brought a group of students, Qi included, to Shenzhen, China, to explore manufacturing and to see how they might use the idea of “scale” in their research, “like, what new questions can we ask if we can have the help of many people to create more than just the one prototype that we built at the lab? While we were on that trip, everyone kind of explored how we might use manufacturing in our own research projects. And mine was around this idea of stickers for building circuits. Other students, Natalie Freed and Adam Setapen and Iyhad made circuit stickers by hand about a year or two before I ever went to Shenzhen. It was one of those fun prototypes that we made for a class project, and then that was that. But, the idea popped up and then kind of like reincarnated itself while I was in Shenzhen. When we found ways to make machines to help us to create more of these, circuit stickers became more feasible as a raw material.”

At that point, Qi and Huang started asking how they could get circuit sticker kits to teachers and anyone who wanted to use them. Inviting them to the Media Lab wasn’t scalable. That’s where the crowd-funding came in. They raised more than $100,000 through Crowd Supply, a service that also shipped the kits to all the people who helped make the project possible.

When they launched the sticker kits, Qi and Huang had already been working with a few educators such as David Cole, Jennifer Dick, and Mia Zamora, who were exploring the unprecedented marriage of creative writing and electronics. They helped connect Chibitronics, Qi and Huang’s new company to networks of educators, including the National Writing Project and Educator Innovators, who started calling the new practice “21st Century Notebooking.” “The interesting part for me as a researcher was how broad the audience for this stuff could be. So, for example, even though we’re building circuits and learning about programming stuff, the first large group of educators that started using our materials through 21st Century Notebooking were mostly English and language arts teachers who used our kits together with writing and poetry, which are completely different from a typical electronics activity, which I found really interesting.”

Since that time, other kind of educator communities have started working with Chibitronics materials, starting with librarians and people who do makerspaces. More recently art teachers have been getting excited because it allows their students to add some interactivity to the artwork that they’re already making. “I’ve learned from working with educators, these educators to post videos on YouTube, and try to keep things really easy to access and use. Personally, I tend to keep to myself. So, I didn’t really use social media very much. But since this project, I’ve started using Twitter just to share what’s available. And, as you mentioned earlier, the teacher and the learner are the same. I’m definitely the learner in this case, like, learning how to spread these ideas and share. What I’m learning is that you work with other people. That’s often the best way to do it, because a lot of these folks know much better than I, how to get this message out in a way that makes sense.

“An educator named Kevin Hodgson had his students write poetry around the themes of light. And, then they would literally light them up. I found the physical-literary metaphors really beautiful. Another English educator had her students do an activity around “The Great Gatsby,” and they used light and dark as themes through which to analyze literature. But then, there was also light and dark in their projects. It’s really interesting for me to see people thinking about these tools in that way. It’s like using electronics as, a highlighter. That’s not a very poetic metaphor. But it is to me very powerful because you’re using it to highlight the importance of the word. The words are the important part, not the ink. Just like the idea is the important part, not the circuit. In that case, you’re actually using your technology as a tool to a greater end rather than just building the technology itself obsessing about that part, which is, I think, where we often get caught up.”

Educators aren’t the only community who are using these tools. “Another growing community is the crafters, adults who like to make home decor or cards or scrapbooks. And, they are using these circuits to light up their cards and their scrapbooks and their home decor. What’s really cool, at least for me, is that, typically, these are grown adult women, so people who I think are not normally seen building circuits. And, yet, they are. That’s meaningful to me because it shows how you can start learning at any age. And then this is, I think, a big deal, because, often, when we think about STEM, we focus on kids, right? Like, filling the pipeline or whatever is the phrase that we hear. But no, you can teach anyone if they find it interesting. And it must be if people are choosing to learn this so that they can make cool cards and other fun things. Another important aspect of crafters using circuit stickers is that these women are also parents or grandparents, and they are suddenly wonderful role models for their children, boys and girls, to be able to see that, yeah, anybody can make technologies, not just dad in the shop. I think that’s really important and wonderful and kind of surprising, because we weren’t really aiming for it. But it’s happening. So that’s one thing that I see in the future. Like, everyone can make electronics and use it in their work, in their artistic work, in their homework, and anything.”

Chibitronics is now working on making things specifically for programming. The first kit had sensors and light and was more about electronics. Now Qi and Huang are thinking, “how do we make something paper-compatible that also introduces programming?” They are working on what is essentially like a large binder clip that you can program, and then the clip can clip onto your paper circuit. The idea is that you can move it from one page to the next, so you don’t have to keep this expensive thing in your project. You can reuse it as much as you want. Next, they are planning a binder that has power in it. “So, you can plug in your clip to your binder and then build a book of program circuits that way. Half of this is still in our imaginations. But, the other half is real. So, we’re working on that right now.”

Qi is also working with a children’s book illustrator and librarian named K-Fai Steele from the National Writing Project: “She has a wonderful imagination and invented these wonderful characters and then draws them. So we’re going to have these really friendly characters be in the book resource that shows you how to use this stuff. It will be like part reading a comic and part learning to program.”