Some connected educators use wikis or mobile phones. Laura Ritchie, a Reader in Pedagogy at University of Chichester, uses cellos. This year, she’s running the ninth version of “Cello Weekend.” According to Ritchie, “I had an idea that in music, people tend to come together like a clan around their instruments at times. So cello players hang together. So I thought ‘I’m going to have a Cello Weekend and it’s going to be for everybody.” Although at the beginning, Cello Weekends were strictly face-to-face events that didn’t yet involve digital media or networks, it did combine two principals of connected learning – it brought people together around their interests outside the university’s formal curriculum, and it connected those people. That connection, whether or not it involves digital tools, is at the heart of connected learning and connected educating, which is what brought Ritchie to ConnectedCourses.net, our open, online course on how to put together open, online courses. 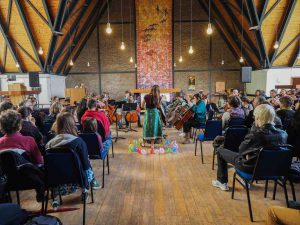 In the first Cello Weekend, complete beginners came together with novices, students, and professionals, from five year olds to grandmothers. They played cellos all weekend, Ritchie arranged the music, and they grew into a “big cello orchestra.” As in any other connected course, the connections that co-learners made with each other and with the teacher was as important as the subject matter. Ritchie wrote parts for the 1812 Overture that five year olds could play, enabling them to play a few notes at the right time while acting in concert with semiprofessionals. “They all work together, so they learn how to form this kind of group and they have experiences outside their roles as students.” Ritchie even brought in the audience at the concert by giving them balloons to pop at the finale of the Overture.

Like many others, Ritchie was drawn into the world of connectivist MOOCs through Jonathan Worth. Worth, a professional photographer who organizes Phonar, a famously successful face-to-face (at Coventry U) and online course about “PHOtographic NARrative” that has attracted tens of thousands of participants. Worth told Ritchie about Connected Courses, and she helped him design his unit on “Trust and Network Fluency.” Worth mentored Ritchie on putting her ideas into an open, online course that ran in parallel to her face-to-face course. Ritchie also contributed a unit on “Photography for Your Ears” for Phonar and in the face-to-face portion of the Coventry course.

Ritchie’s recent open, online connected course was about creating a curriculum for connected learning about music: “In music, nobody teaches you how to run your own studio, how to write curriculum, because it’s an individualized, private learning environment that still is very old school and is sort of master and apprentice. When you study with somebody, you’re very devoted to that person. And, also, there’s a sense of loyalty that you wouldn’t necessarily either give away all their secrets or you wouldn’t burst into someone else’s teaching space. It’s like a family unit. You wouldn’t just walk into somebody’s house and say, “How do you run your family?” What that means for a musician is I only know the family that I’ve grown up with. And I may be lucky and have a fantastic family, but I may not. And I may be able to improve my experience and my knowledge and my skills by broadening my horizons. That’s what I took to the course. The course that I put out online was about making a curriculum. First of all, that doesn’t exist at a high level anywhere that I could find. And so I didn’t want to make something that was prescriptive and told you the answers. In music, you can find music theory courses online and it’s yes or no. This is correct. This is incorrect. But when you’re talking about devising a curriculum for an instrument, for a specific age, for a specific target audience, it’s going to be different for everyone. So what I wanted to do was give people the tools and the resources to give them enough information on satellite topics that they could then process it and make their own decisions. The practice of posting everything and sharing it and writing about other people’s things, I think, is a bit of a cultural shift within music.” 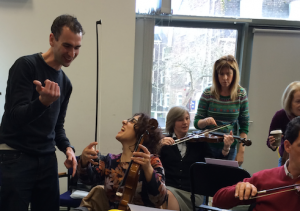 Ritchie created a topic for each week with various activities for participants. Some of them did post music. Some did it in private and used it with their students. “Many people don’t yet have the confidence to expose their learning processes. In music, you practice, polish, and perform – you do all the grind work in private. I asked teachers and students to consider turning that process upside down: ‘As a teacher, I think it’s very important to have the learning process out there so learners can look at that process, not just experience the finished product, if they are to understand how to do it themselves. I think it’s helpful for learners to see it through, including the mistakes and the times they think they are doing something well and then learn that they have to redo it or change direction. I think it’s very important to convey that you can’t necessarily have plans that are set in stone, especially in music, where it’s very physical and personal because everybody has a different body and a different understanding of how they are learning.”

For example, Ritchie started off with the mechanics of sound, to get them to think about what sound is and how they produce it. “We talked about the physics of sound, we looked at the mechanics of sound and what makes a melody, what scales and studies and connecting materials do. I talked about aural perspective. How do we hear, perceive, listen? What are the components within sound, such as harmonics akin to the way colors are components of light.” Ritchie presented activities that people could use to produce. Instructional videos, overtone singing, slow motion photography of a cymbal or a violin string – actually seeing how sound waves are transmitted.” With each activity, Ritchie encouraged learners to post on blogs and Twitter, to tag, share, and comment.

For melodic playing, one activity was “cross-dressing a melody.” Ritchie post a picture of three dogs wearing fancy dress, commenting: “Think of an iconic tune that goes with a particular instrument. Test it out. Choose a real classic that’s perfect on its instrument, whether it is Judy Garland’s voice or Louis Armstrong’s trumpet. Then play that on your instrument. Give it a face lift and see if it works. Is it still a good tune? Play it. Record it. Share the recording, if you’re willing. Write about the experience. Blog it. Tag it. What does this process reveal about the melody? About the instrument? And maybe even about playing on your instrument?”

For another course activity, a friend of Ritchie’s, a classical violinst turned jazz violinist, recorded a ten minute segment on the difference between a riff and a melody. He uploaded the video and tagged it; Ritchie embedded it in the class hub. Because of time lags caused by differences in bandwidth when people distributed around the globe Skype Skyping or Hangout on Air, music is tricky online in real time. Ritchie’s ready to jump in: “A year and a half ago, I would have been afraid to experiment with real-time audio and video, but now, I’m not. When people see that I’m not afraid to try something that could fail, often they will do it themselves. There’s a lot of fear in education. When you’re working in music with sound and bodily motions in real time, the best thing that can happen at the beginning is to dissipate that fear. Everybody has a fear of failure, so it helps for the teacher to model how a desire to learn overcomes fear of failure.” 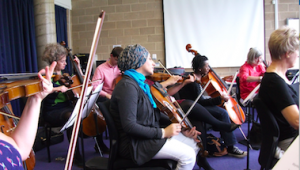 Ritchie decided to bring five students to America. Throughout the academic year, Ritchie carried on a conversation every Friday with Jonathan Worth, an architecture professor at Cal Poly, and a high school teacher in San Luis Obispo. When Ritchie raised the possibility of her visiting California, the high school teacher said “What about your students? Are they invited?” So Ritchie asked her students “Who wants to come along?” and bought their tickets on their credit card. In the month since the tickets were purchased, the students raised over 4000 pounds and paid Ritchie back. She and five of her students plan to work with 50 high school students, some students from UCLA and Cal Poly, professors from both places, David Preston, a couple of grade school kids, and an art teacher. The plan is to record an album and release it as free downloads. One of the students that her students had been mentoring said he didn’t think he could join us because of the cost. The students Ritchie had financed decided to pay for the him and count on him to raise funds to pay them back later.