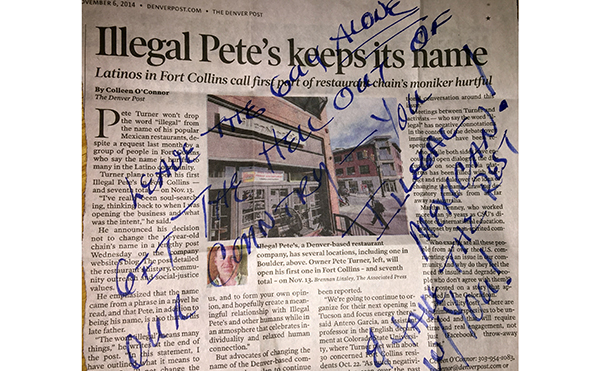 As part of a larger effort protesting the racist name of a local eatery, I was struck by how angry the responses were. Voicing concern for both myself and for society about what language does meant that commenters often assumed I was concerned about the racist name of a restaurant because of my own legal status in the country. (And to lay any readers’ thoughts to rest: I grew up multiracial in southern California, I’m half white, and the closest thing I have to an accent is the unromantic SoCal drawl with a penchant for saying “dude” and “hella” way too often, dude.) But, this blog post isn’t really about my experiences from 2014; it is about how the context of language has changed in the past few months.

Ultimately, I took a conscious step back from the protest efforts last year. The emails, comments, phone calls, and mail I received made engaging in public debate less than healthy for my family. And, though the hate mail and uproar over the restaurant has largely quieted down in my neck of the woods, I was struck by renewed vitriol over the name as the latest restaurant opened earlier in December in Arizona. Reading over news reports, I was struck by the comments: the same hateful language – “go home,” “go back,” “stupid illegals” – that is used to defend the name year after year.

It is in light of the renewed protests of the use of the “I word” that I wanted to contrast two other contemporary examples of society changing the contexts of language in the past few months.

On June 18, the night after Dylan Roof killed nine people in a church in Charleston, author and MacArthur “genius” Fellow Ta-Nehisi Coates wrote the following:

Elaborating in an article for The Atlantic, Coates explains how defenders of the Confederate Flag promote its role as part of American “heritage” rather than “hate.”

Continuing dialogue, protest, and an engaged public regarding, ongoing racial violence in this country helped illustrate how the symbolic language of the Confederate flag speaks in ways that maintain a context — intended or not — that have hurtful consequences.

Two weeks after Coates’s tweet, the flag was removed from the South Carolina state capitol.

I was struck by the significant, landmark change and the lives that were lost that helped instigate broad public action. The context of speech changes over time. What may have seemed innocuous to many in the past ebbs and flows as the patterns and expectations of speech adjust with the present era.

He, She, and They

Earlier this month, the Washington Post accepted the use of “they” as a singular pronoun.

Though the significance may not feels as ground-shaking as the example of the Confederate flag above, “they” is a landmark step toward gender inclusivity and to addressing non-binary genders within how we address individuals in our writing. In a recent blog post, Andy Baio describes his efforts to address gender bias in poker, noting his thwarted efforts at addressing Wikipedia entries that assume only males playing the game. Similarly, for English teachers, Bill Bystricky addressed the role of “they” in English classrooms on the blog of the National Council of Teachers of English.

Again, the context of what gender means and our relationship with the words describing it have changed. What may have seemed grammatically incorrect in the past is now a move toward inclusivity.

Words matter: they can erase entire identities; they can whitewash (and genderwash) assumptions about who we are; they can empower and uplift; they can stifle and destroy.

Words, like the concentric circles of ripples in a pond, create consequences and teach society in ways that have long-term effects. So often the lists of newly added words to dictionaries point to how our vocabulary keeps up with technology and cultural shifts around digital tools. “Selfie sticks,” “Netflix and chill,” and even #blacklivesmatter illustrate how our vocabulary moves alongside digital dialogue. Words are added and words change. But, we must also remember that the labels and the phrases in our current repertoires might need revisiting. Whether symbolic language — like flags that represent messages we can no longer uphold — or grammatical rules affecting gender identity and conformity, the second half of 2015 illustrated that we are a society particularly willing to consider and address our contemporary (mis)uses of words. I am optimistic about how our vocabulary will both grow and contract in 2016.

Banner image: A letter mailed to Antero Garcia says, “Leave The Guy Alone. Get The Hell Out Of Our Country – You Illegal Mexican! & Take The Rest w/You!”