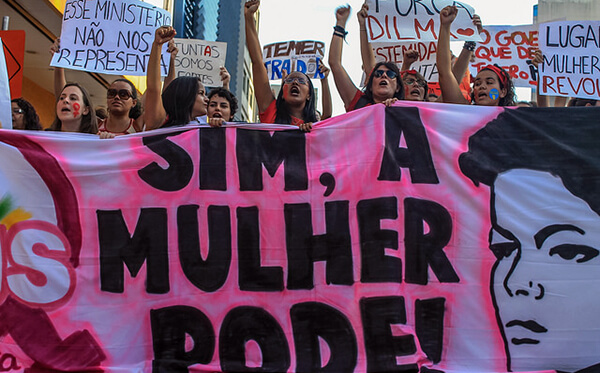 In 2010, we Brazilians elected our first female president. Dilma Rousseff was re-elected in 2014. Today, she awaits her impeachment trial by the Senate as Vice President Michel Temer assumes her duties.

Since Temer took over as interim president in mid-May, he has made unpopular decisions that are impacting the way people react to his new government. During his first days in office, Temer eliminated nine ministries, including the Ministry of Culture. He also put an end to the Union General Control, the institution responsible for overseeing and making transparent the government’s public accounts. And, he replaced all of Rousseff’s ministers with an entire team of white men. No women, no people of color, no major Brazilian population are represented in the highest and most powerful political positions in the country. When he eliminated MinC, protests led by famous artists and leaders connected to the cultural institutions in Brazil, launched online and in the streets, and the MinC was reinstalled.

Most Brazilians — 62% — want an election right away to select their president. Rousseff supporters from the left party, called “Mulheres pela democracia” (Women for democracy), “Mulheres contra o golpe” (Women against the coup”), “Mulheres com Dilma” (“Women with Dilma”) and “#FicaQuerida” (#StayDear), began protesting even before Rousseff was suspended. The protest campaign gained engagement in a nonpartisan way during the first weeks of the impeachment process, when a magazine in Brazil published an article about Temer’s wife, Marcela, calling her, right in the headline, “Bela, recatada e do lar,” which means beautiful, maidenlike and a housewife. The article describes Marcela as a perfect future First Lady, who was 19 when she went on her first date with Michel Temer, 62 at that time, and who now spends her days taking care of their house and son. The article also emphasizes her beauty, saying that she won beauty pageants and attended law school although she never worked. The majority of women online found the magazine piece sexist and denounced the way it described Marcela as an example of how a woman should behave to be considered a good example for society. Knowing that our president is a woman who is the complete opposite of Temer’s wife, it’s not a surprise that the story caused so much outrage. 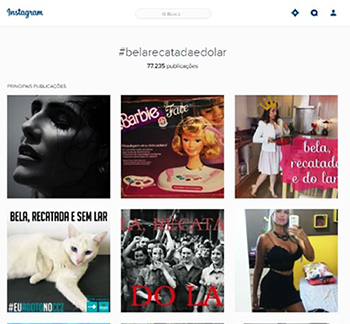 More than 100,000 pictures have been posted on social media sites, including Instagram, following the magazine publication. The photos, tagged with the hashtag #belarecatadaedolar, are being posted by women of all ages, posing for pictures showing the opposite of what the article described as ideal. These women are publishing pictures of themselves drinking, wearing all types of clothing, being sexy and hard working. With a lot of humor, the movement has become strong enough to make people from all political sides join. Even famous brands and people are using the hashtag and contextualizing it to their product as a marketing campaign on social media.

The hashtag resonated so symbolical, that it opened space for related pro-feminist events and rallies. The pro-Rousseff groups use it to rally support for the suspended president and to call for her return. These groups are getting stronger with non-partisan voters joining the cause, especially because of the all-male Temer government. Even the female national deputies use social media to express their outrage.

On Facebook, many women are in favor of the magazine’s message about beauty and discrete behavior, justifying Christian values, and posted photos of home-making situations such as cooking, but without the funny protesting tone. The article impact was a full plate for feminists, but also fun for teens and women without political opinions. Men also participated, some of them praising Michel Temer for the beautiful wife, comparing her to Rousseff and campaigning against the suspended president. Others defended the outraged women. Despite that, with the pseudo-journalistic article published by a vehicle that is already known in Brazil for being elitist, the reaction to its report caused a social media movement that is taking the impeachment discussion to another level.

People are using #belarecatadaedolar as an online and offline identity for feminist engagement and as one more cause to justify the impeachment process as a mistake for the country’s progress. Being “beautiful, maidenlike and a housewife” is not enough for Brazilian women, who are taking the hashtag to the streets and online, engaging other women and fighting for equal rights. What we realize now is that the interim government, with its denial to allow women a strong voice, has propelled women to speak for themselves, touting feminist ideals. If women today don’t have a voice as president or as ministers, it won’t stop them from screaming for their rights. People are still protesting and occupying government buildings all over the country. Men and women are protesting for the same reason: “You gave us back the Ministry of Culture, now it’s time for you to give us back our country!”