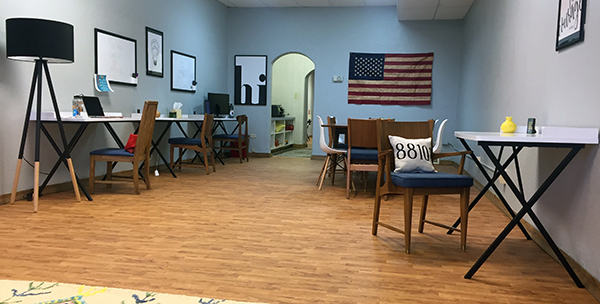 “We moved nine times in 14 years…It wore me down. Anything I started and developed on my own got taken away.”
— Joanna McGuffey, founder and CEO of Unconventional Works

I met Joanna in 2015 at Nucleus CoShare, a coworking office in Dayton, Ohio that serendipitously opened not long after we both moved there to accompany our service member spouses at their new duty locations. She was a seasoned Air Force spouse, having moved nine times in 14 years and I was brand new. Joanna told me that she joined the coworking office because she was “in a dark pit of yuck” after arriving in Dayton. I empathized with her. When we moved to Dayton, I was newly married, new to Ohio, and new to military life. I was also leaving behind my academic department and support network, where I had just achieved status as a doctoral candidate in sociology. Like many military spouses, I was terrified that I might lose my hard-earned professional identity. I was and remain committed to my wife’s service, but I was also afraid of what I might have to sacrifice in the process.

As a junior scholar for the Connected Learning Research Network who studies open learning, I’ve spent a lot of time thinking about how connected learning can be utilized in moments of labor market uncertainty. In my dissertation, I show how a style of learning that I call “The Pedagogy of Precarity” is emerging as a result of changes in the labor market, following the 2008 crisis and subsequent economic recession. While technology is facilitating this shift, I argue that the rise of labor market precarity has encouraged young people to learn-to-learn flexible, modular learning practices while learning-to-belong as flexible, risk-taking, and persevering people. It’s a story of how institutional challenges were met with individualized but connected solutions. Recently, I’ve been thinking about how to apply what I’ve learned about connected learning to serve my community of military spouses.

While military and policy leadership tend toward institutional questions, like the impact of these frequent moves on their all volunteer force, spouses are connecting with each other in entrepreneurial ways and are building the types of communities that will serve them while their spouses serve our country. These solutions don’t erase the sacrifice, and their impact on unemployment is unclear, but they do limit the isolation and professional stagnation many spouses experience when going to work in an office each day is not an option. They also connect military spouses to their local communities, like Joanna experienced when she joined Nucleus CoShare to escape her dark pit of yuck.

Joanna credits Nucleus for giving her access to mentors and other entrepreneurs who could teach her skills that she did not have yet and for guiding her through challenges they had already experienced. Nucleus also gave her a sense of connection and order. It got her out of the house and into a space where others were working to achieve their own success and were willing to help out peers along the way. As a scholar, coworking for military spouses reads to me like an excellent place to realize the task and promise of connected learning. Military spouses are not a population we talk about in the digital media and learning (DML) world, but connected learning is alive in our communities. It’s how things are done when you’re part of an organization that tells you where to live and for how long. Shared purpose, peer support, and open networks are already part of our learning ecology. We avoid dark pits of yuck by connecting with each other and connecting to our new communities through online and offline networks, learning how to navigate our new bases through the experiences of spouses who have been there before us.

With the rise of programs like In Gear Career and ventures like edge Coworking, we can turn our attention to interest-powered, production-centered, career-oriented learning. In Gear Career was started by three military spouses who identified a gap between the career needs of modern military spouses and the gendered, entry-level nature of existing employment programs for spouses. Through online communities and local base chapters, they promote employment, career development, and networking opportunities for military spouses across all professional occupations.

Edge Coworking was started by Brooke Barnes and Jessica Johnson, two military spouses stationed with their husbands at Cannon Air Force Base in rural New Mexico. In addition to running edge, Brooke works full-time remotely as a consultant and engineer and Jessica works full-time remotely as a consultant. They both described loving their jobs but hating the isolation of working remotely. They longed for assignments to big cities where they would have more professional options, but knew that their chances were slim. Instead of waiting around for those rare orders, they decided to create edge Coworking and tailor it to the military spouse experience. At edge, which stands for “empowering, doing, growing, everywhere,” military spouses have the opportunity to work independently alongside other members with similar aspirations, much like Joanna described finding at Nucleus. They provide social and educational programming and have aspirations to grow to every military base where coworking is not available while partnering with existing coworking offices that are already established near bases.

Connected learning spoke to me as a scholar because it does not break when institutional and structural frameworks will not bend. While we must theorize and advocate for better institutional and structural conditions, we cannot ignore the “right now” of communities’ needs. My community of military spouses have great needs, but it is unlikely that we will see the type of structural changes that can serve those needs any time soon, if at all. I would like to serve my community by creating a bridge between the DML world and military communities. Will you join me? Are you near a military base or are you a military spouse yourself? How might you advance connected learning? I’d be thrilled to hear your ideas. Tweet me at @LBCarfagna or visit my webpage to send a note.