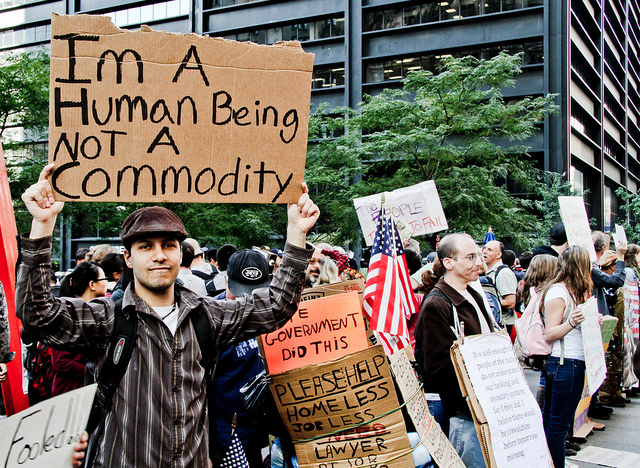 Media activists Marisa Jahn and Julian Rubinstein recently joined us at the Center for Civic Media for our weekly Civic Media Lunch series. Marisa is the new director of the People’s Production House, a New York based project that works with low income workers and youth, building capacity around media creation. Julian is an author and journalist who now works on Newsmotion.org, a civic media and documentary storytelling initiative.

Marisa walked us through some of her history as an activist and artist, showcasing some of her work as a graphic designer. For the 2008 Wall Street protests, she designed a “Bailout = Bullshit” logo and signage.

Other work has focused on curation, supporting a project by Amy Balkin to create audio tours of the Interstate 5 corridor through California. The highway features some high-pollution sites, like tire fires and chemical spills. The tour is built through community-produced audio pieces and was presented to audiences through hosted listening sessions as well as distributed at truck stops. Another curation project produced the edited volume, Byproduct, a collection of cases of “artists embedded in non-art sectors,” including the case of mimes used as traffic cops in Bogota, Colombia. 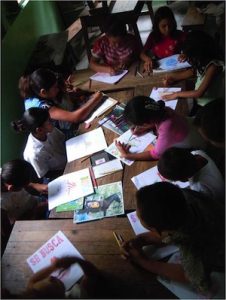 Other projects have been more focused on community service (and are perhaps more practical). For a project in El Pital, Honduras, Marisa created a mobile library on the back of a burro, accompanied by a character, “Bibliodandido,” who terrorizes children until they write stories for him. The Bibliobandido workshop promotes self-publishing and literacy through bookmaking in a region whose infrastructure has been decimated by both Hurricane Mitch in 1998 and a current unstable presidential regime. Older kids in the village got into the act and helped put up wanted posters and threats, encouraging children to write stories and enter their names in a mustacio’d book to avoid being terrorized.

During a residency in Tajikistan, she became fascinated by a two-line poem form called the biyat (think “Rubiyat,” which comes from the same poetic tradition.) She saw a parallel between this and the ways in which people used mobile phones in Tajikistan, making calls that lasted only the ten seconds of free time allowed by cellphone operators. This led to a contest to find the best 10-second poems, “juried by ‘the Oprah of northern Tajikistan’” and shared with the country on national radio and television.

Her work in political media is connected to work with i-witness, a grassroots advocacy group documenting the policing of protests. This work, which she did with my colleague Sasha Costanza-Chock, was able to help in the dismissal of one-third of protester arrests by comparing citizen and police footage to display police media manipulation.

In her current role as director of People’s Production House, she trains teens from New York City schools in media production and has sent trainers into the field in places like Liberia to work on media monitoring and training civil war survivors in storytelling. People’s Production House also features a media policy channel, which produces toolkits to educate people on how telecommunications policy affects lower income people and people of color.

A recent project with Domestic Workers United focuses on a law recently passed in New York State that gives nannies minimum wage, overtime and some other basic benefits. Marisa offered the example of Christine Lewis, a nanny she’s worked with on the DWU project, who’s talked about 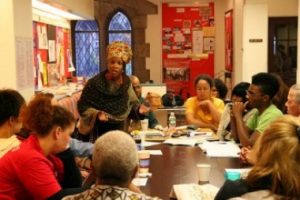 the sense of guilt a nanny can feel about caring for a child for money, and the need to give twice as much love to your own child…and the tension of feeling like if you lose your job, you’ll be cut off from the child you’re caring for and have come to love. So how do you communicate the essence of these laws to nannies via the phone? People’s Production House is now producing an interactive voice response system that offers audio readings of the laws as well as detailed explanations of rights.

Julian comes from a different background: he’s a former sports journalist who cut his teeth as a sport writer at The Washington Post, dropping box scores into sports pages. He told us about watching the transition from disinterested to deeply non-objective sports reporting, a transition that sharpened his interest in underdogs and outcasts. He spent weeks following El Duque around the minor leagues, telling the story of a celebrated Cuban pitcher trying to make it in unfamiliar America.

This interest in deep and complex storytelling led him to write a book about a truly peculiar Hungarian sports story, the tale of a minor league hockey player and Zamboni driver who ended up robbing post offices in Hungary. The book, The Ballad of the Whiskey Robber, is both a portrait of this figure and a rich picture of Hungary in its transition from communism to market-based systems.

His current project, Newsmotion, emerged from trying to offer narratives of the Arab Spring through the view of eyewitnesses. Offering an overview of this complex story involves personal narratives, analysis of data and visualization.

Newsmotion, a program of People’s Production House, is building an open-source platform and toolbox for adult and youth media designed specifically to help cover Occupy Wall Street and related movements, and Marisa told us that the people building it have been working on these issues since 1999 in Seattle. The platform seeks to combine original content and curated aggregation in order to identify the best, most relevant and accurate sources, whether they’re official, unofficial or citizen sources.

One of the key challenges of the system will be finding a way to tell both the broad story – seeing the various points on a map where people are participating in the movement – and the deep story. The group is commissioning and serializing portraits of individuals to show off the complexities of these issues, with the goal of being able to tell subtle, multifaceted stories related to the issues. This sort of subtle, complex story, such as the one from nanny Christine Lewis, may need to be told over a long time, in serial, and not in a single dose.